FAO and PAHO warn that hunger has increased in six countries and now affects 2.4 million persons in the region. While, overweight continues to be a public health problem across the Americas.

10 October 2017, Santiago, Chile - The total number of persons that suffer from hunger in Latin America and the Caribbean has increased, reversing decades of progress.

Meanwhile, overweight affects all age groups in men and women, and constitutes a major health problem in all countries in the region of the Americas. 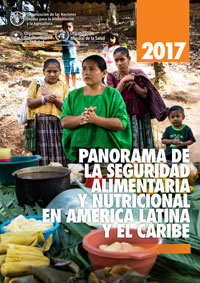 This is according to the Panorama of Food Security and Nutrition in Latin America and the Caribbean 2017, published by the Food and Agriculture Organisation of the United Nations (FAO) and the Pan American Health Organisation (PAHO).

The publication also highlights that after many years of gradual progress, in 2016, approximately 42.5 million persons did not have enough food for their daily caloric needs. This is an increase of 2.4 million persons, 6% more of the undernourished population than the year before. If this trend does not change "it will be very difficult for the region to reach Sustainable Development Goal 2 on eradicating hunger and malnutrition by 2030", said Julio Berdegué, FAO Regional Representative.

While hunger levels remain low in Latin America and the Caribbean in comparison to the rest of the world, there are signs that the situation is getting worse, especially in South America, where hunger grew from 5% in 2015 to 5.6% in 2016. In Mesoamerica, hunger affected 6.5% of the population in 2016. Although hunger has not increased in the Caribbean, its prevalence is at 17.7%, making it the sub-region with the greatest prevalence.

"We are heading along a bad path. The region has taken a significant step backwards in a fight that it was winning. We cannot tolerate the current levels of hunger and obesity, as they will paralyse the entire Latin American and Caribbean generation", warned FAO Regional Representative, Julio Berdegué.

"While malnutrition persists in the region, especially amongst vulnerable populations, it is now accompanied by overweight and obesity, affecting women more than anyone and also children", affirmed PAHO Director, Carissa F. Etienne.

"The region faces a double burden of malnutrition, to fight against it, we must ensure access to a balanced diet and tackle the primary social factors that cause malnutrition, such as, the lack of access to healthy foods that are low in sugar, salt and fat, to water and sanitation, to education and health services and to social protection programmes, amongst others", Etienne indicated.

To address this situation, FAO and PAHO call on countries to transform their food systems in order to stop the advancement of hunger and malnutrition, paying special attention to the condition of the most vulnerable people, homes and territories. The publication highlights that only through a great regional effort can the current trend be reversed, to return on the path that made Latin America and the Caribbean a global example of the fight against hunger and malnutrition.

Despite the fact that hunger increased in six countries and fell in twenty-one, the absolute number of people suffering from hunger has increased.

The worse situation in terms of prevalence of hunger is in Haiti, where 47% of the population, that is approximately 5 million people, suffer from hunger. This number represents almost two-thirds of all undernourishment across countries of the Caribbean.

Although hunger at the regional level has increased, 21 countries of the region have lowered their level of undernourishment, including the Caribbean and Mesoamerican as a whole, between 2013/2015 and 2014/2016.

In Brazil, Cuba and Uruguay, the prevalence of undernourishment is less than 2.5%, while in Argentina, Barbados, Chile, Mexico and Trinidad and Tobago it is below 5%.

Overweight and obesity continue to affect everyone

Overweight and obesity affect all age groups in men and women, and is a public health problem in all countries of the Americas, as pointed out in the Panorama of Food Security and Nutrition in Latin America and the Caribbean 2017.

While acute malnutrition (underweight for the size) has been practically eliminated from children under 5 years old in the region, there are already 11% suffering from chronic malnutrition (stunting), but it should be noted that 7% of the children suffer from overweight.

"Nowadays, it is easy to find homes with one malnourished child and an overweight mother, or a chronically malnourished and overweight child or one with a vitamin and mineral deficiency", Etienne stated. She highlighted that "the consumption of over processed products is directly related to the increase in the prevalence of overweight and obesity, as well as non-communicable diseases. It is in this area that we must intensify our efforts at the country level to help people to have access to healthy food".

The Panorama of Food Security and Nutrition in Latin America and the Caribbean 2017 reports on the progress of countries in the region in meeting the targets of the Sustainable Development Goals (SDGs), for the first time since the approval of Agenda 2030 for Sustainable Development. It also gives policymakers the information they need to propose and advance policies and programmes that help to fight against hunger, chronic malnutrition and to stop the rapid spread of the obesity epidemic.

Marta Ramón | This email address is being protected from spambots. You need JavaScript enabled to view it. | +56 229 232 252 | FAO Regional Office for Latin America and the Caribbean