XVII Meeting of the Ibero-American Network of Donation and Transplantation 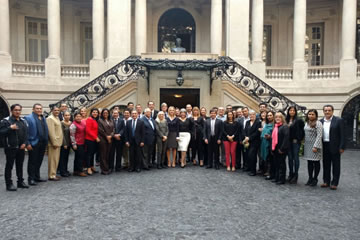 Washington, September 6, 2017 (PAHO/WHO) - The Pan American Health Organization (PAHO) participated in the XVII Meeting of the Ibero-American Network of Donation and Transplantation (known in Spanish as RCIDT), together with representatives of donor and transplant organizations from 19 Latin American countries and representatives from international scientific societies for transplantation, in Buenos Aires, from August 31 to September 1, 2017.

At the opening of the meeting, María del Carmen Bacqué, President of Instituto Nacional Central Único Coordinador de Ablación e Implante (known by its Spanish acronym as INCUCAI), mentioned the governments' commitment to advance their self-sufficiency in transplantation.

In the two-days meeting, chaired by the National Organization of Transplants of Spain, participants presented reports on the activities and progress achieved during 2016 in each of the council member countries and of the scientific societies adhering to the RCIDT.

The World Health Organization (WHO) presented the WHO and the Global Observatory of Donation and Transplantation report, with particular emphasis on the development of a document that would establish procedures for organ transplantation in approved centers. The importance of Latin America countries' adherence to the Council of Europe Convention against Trafficking in Human Organs was reiterated.

PAHO will continue the support of the official registry of the donation and transplantation activity in countries from the Mercosur (known in Spanish as DONASUR) that collects the transplant activity of the region, through the collaborating center INCUCAI, and will lead the development of a study on the cost of dialysis versus renal transplantation to support decisions in this regard from Latin America.

It was also highlighted that countries can acquire immunosuppressive medicines used in transplants through the PAHO Strategic Fund, which is a mechanism for the pooled procurement of essential medicines and strategic health supplies.

The Network's mission is to develop cooperation among its members and to make recommendations on organizational, regulatory, professional, ethical and sociological aspects related to the donation and transplantation of organs, tissues and cells. Since its creation in Mar del Plata in 2005, it has been established as an area of cooperation for the development and strengthening of national systems in that specialty.