New report says that expanding access to all prevention options could reduce the 120,000 new cases of HIV reported each year in Latin America and the Caribbean

Washington, DC, November 29, 2017 (PAHO/WHO) - A new report from the Pan American Health Organization (PAHO) and UNAIDS says that expanding access to all HIV prevention options that are now available would reduce the number of new cases of HIV in Latin America and the Caribbean, which since 2010 has remained at 120,000 every year. 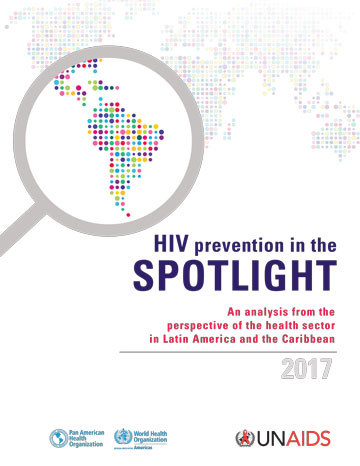 Launched on the eve of World AIDS Day, the report, HIV Prevention in the Spotlight - An Analysis from the Perspective of the Health Sector in Latin America and the Caribbean, analyzes progress made and challenges facing health systems in preventing HIV transmission.

"We have seen important progress in the fight against AIDS in Latin America and the Caribbean, with major reductions in childhood infections, improved treatment and fewer deaths from AIDS. But we have not yet seen the same success in terms of reducing new cases in adults," said PAHO Director Carissa F. Etienne. "Preventing new infections requires intensifying efforts and ensuring that the most vulnerable people have access to all options and new technologies in a discrimination-free environment."

The report advocates what is known as the combination prevention approach, which is based on scientific evidence, respect for human rights and nondiscrimination, and which includes three elements: offering a comprehensive package of biomedical interventions to users, promotion of healthy behaviors, and establishment of enabling environments that facilitate access to and use of prevention measures.

According to the report and UNAIDS data, the majority (64%) of new HIV cases occur in gays and other men who have sex with men, in sex workers and their clients, in transgender women, in people who inject themselves drugs, and in couples belonging to those key population groups. In addition, one third of new infections occur in young people aged 15 to 24.

"Reducing new HIV infections among key population groups and the most vulnerable, including women and young people, will require specific high-impact HIV prevention actions, access to evidence, treatment for all, and joint actions against discrimination," said UNAIDS Regional Director for Latin America and the Caribbean César Núñez. He added that it is equally important to have "an unwavering commitment to respect, gender equality, protection and the promotion of human rights, including the right to health."

Offering a range of prevention methods

Currently there are many scientifically proven prevention options that health services can offer to help people prevent HIV infection and protect their health. These measures include new options such as self-administered HIV testing, which can be done at home, and the availability of HIV testing in places other than health centers. In Latin America, 2 in 10 people with HIV and 4 in 10 in the Caribbean do not know they have the virus, which represents an improvement over last year. Early diagnosis improves the quality of life of people with HIV and also helps prevent new infections.

The report also advocates distribution of condoms and lubricants, offering syphilis testing at the same time as HIV testing, and providing universal access to treatment, which significantly improves the health of people with HIV while also reducing the risk that they will infect their partners. The report also recommends the promotion of peer-led community outreach activities and providing health information and education.

The publication warns against dependence on international funding for prevention actions (such as peer education and provision of condoms and tests by NGOs) for key population groups, while also highlighting the decisive role that civil society can play in making the HIV response more effective, particularly in the area of prevention.

The report calls on governments, civil society and international organizations to work together in partnerships to accelerate the introduction of new prevention technologies, expand the availability of prevention options and ensure universal access to HIV prevention services to reduce new infections and end the AIDS epidemic by 2030.

The AIDS epidemic in Latin America 2016 *

The AIDS epidemic in the Caribbean 2016 *

PAHO works with all the countries of the Americas to improve the health and quality of life of people throughout the region. Founded in 1902, PAHO is the world's oldest international public health agency. It serves as Regional Office for the Americas of the World Health Organization and is the specialized health agency of the inter-American system.