23 JANUARY | 2018 GENEVA - The WHO Executive Board, currently holding its 142nd session in Geneva, has appointed Dr Carissa Etienne for a second term as Regional Director for the Americas of the World Health Organization (WHO).

Dr Etienne was elected Director of the Pan American Health Organization (PAHO) by the countries of the Americas on 19 September 2012 during the 28th Pan American Sanitary Conference. She was re-elected for a second term in September 2017.

PAHO serves as the Regional Office for the Americas of WHO (WHO/AMRO). Dr Etienne will begin her second five-year term as PAHO Director and WHO Regional Director on 1 February 2018.

"My vision for the Americas is of a society free from inequality where everyone, particularly the most vulnerable and disadvantaged people, can lead healthy, meaningful and productive lives," said Dr Etienne. "One of my top priorities is ensuring that everyone has access to quality health services without fear of being impoverished." 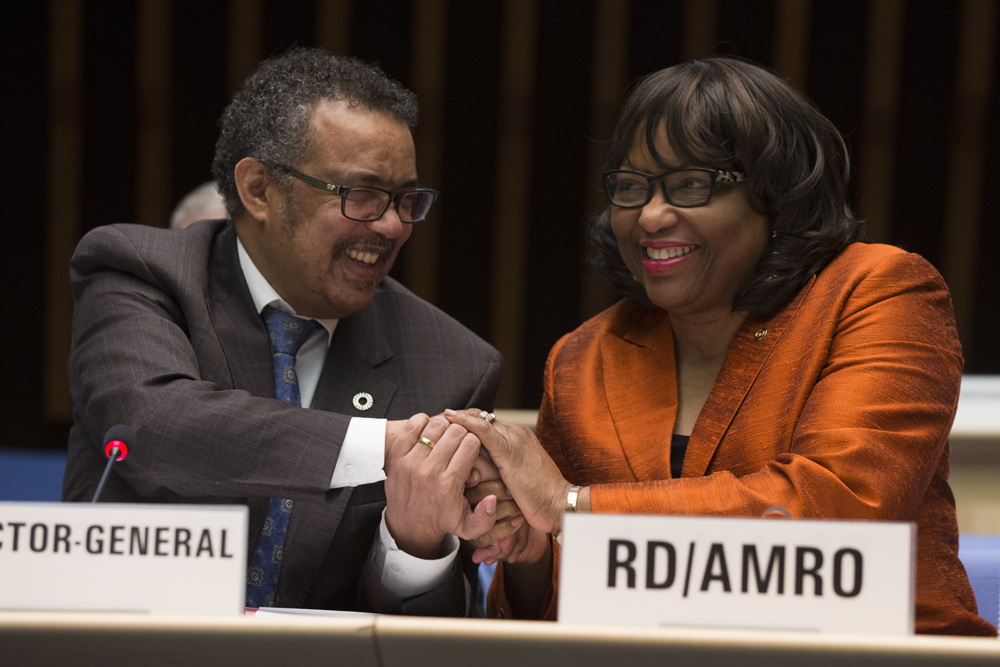 Under her leadership, during these past five years PAHO led preparedness and response efforts to the regional Zika and chikungunya epidemics as well as to yellow fever outbreaks in Brazil. The Americas became the first WHO Region to eliminate the endemic transmission of measles, rubella and congenital rubella syndrome. Four of the six endemic countries in the region eliminated onchocerciasis, and trachoma in one country, while a number of countries are much closer to malaria elimination certification. Seven countries and territories in our Region achieved dual elimination of mother-to-child transmission of HIV and congenital syphilis.

Advances have been made in the strengthening of national health systems and services and in progress towards universal health. Efforts to prevent and control noncommunicable diseases gained considerable traction as more countries have enacted legislation on the labelling of food products, and others have introduced taxes on sugar-sweetened beverages at the national level.

She holds degrees in medicine and surgery from the University of the West Indies as well as a Master's in community health and an honorary diploma in public health from the London School of Hygiene and Tropical Medicine.