Improving access to health for the most vulnerable, ensuring sufficient financing for health, and preparing health services to withstand the effects of climate change are among her priorities for the next five years. 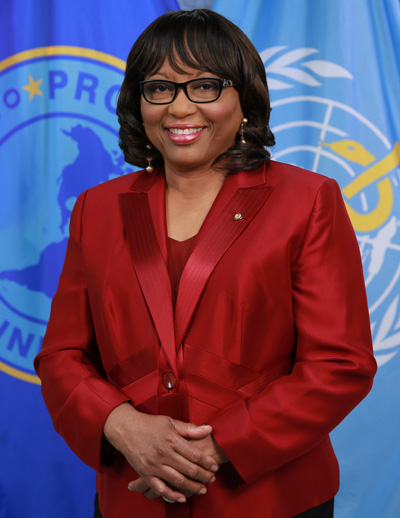 "In this Region, most of our countries have reached the stage where many of the easy public health gains have already been achieved," said Etienne in her inaugural address, "which means that each incremental improvement in the health of our peoples requires a redoubling of our efforts, in order to reach those most vulnerable and marginalized individuals that still lack health care."

She said that increasing overall investment in health will not be enough to meet this challenge. "Targeted interventions that make a tangible difference in the lives of underserved populations will be the key to our success," said Etienne.

Over the next five years, Etienne will work with PAHO member countries to advance toward "health for all." A high-level commission formed by PAHO will analyze progress toward this goal since the 1978 Alma-Ata declaration on primary health care and will examine the persisting gaps and challenges to further progress in the Region toward universal coverage and universal access to health.

Etienne begins her second term on a path already set by the 2030 Sustainable Development Agenda, the WHO General Program of Work, the PAHO Strategic Plan, and the Sustainable Agenda for the Americas, which provide an intersectoral framework for social and economic development in all countries.

Etienne said she would be advocating for increased funding to be allocated for health and for that funding to be well spent and focused on primary care, with the goal of reaching the most vulnerable. She will also prioritize strengthening of health information systems, to ensure that we have quality data that will help us to better identify inequities and vulnerabilities and to inform the development of health policies and plans. Towards this end, Etienne recently created a new PAHO department on Evidence and Intelligence for Action in Health.

Etienne is the first Caribbean woman to lead the hemispheric health organization and will also focus on preparing health services in the Region to withstand the effects of climate change.

"A key part to ensuring that the health sector responds adequately to natural disasters lies in the development of resilient health systems," she said. Her native country, Dominica, was among those countries most affected by hurricanes in the past year.

Etienne first five-year term began in February 2013. She was re-elected by PAHO Member States during the Pan American Sanitary Conference last September 2017. She was also named Regional Director for the Americas for WHO by the WHO Executive Board in Geneva in late January 2018.

Under Etienne's leadership, PAHO has also supported member countries during a series of epidemics, including Zika, chikungunya and yellow fever. The Region of the Americas became the first WHO region to eliminate endemic transmission of measles, rubella, and congenital rubella syndrome as well as neonatal tetanus. Four of the region's six countries that are endemic for onchocerciasis have eliminated that disease, and one country has eliminated trachoma. Meanwhile several countries are close to certifying their elimination of malaria. Seven countries and territories have received validation of their elimination of mother-to-child transmission of HIV and congenital syphilis, following Cuba's becoming the world's first country to be so validated.

Efforts to prevent and control noncommunicable diseases have also been a priority for PAHO in recent years. A number of countries have made particular progress in the areas of food labelling legislation and taxation of sugary beverages.

Etienne joined PAHO in 2003 as Assistant Director in charge of technical areas at PAHO headquarters in Washington, D.C. From 2008 to 2012, she was Assistant Director for Health Systems and Services at WHO in Geneva, where she focused special attention on renewing the primary health care approach and strengthening health systems based on primary care.

Before joining PAHO/WHO, Etienne held positions in her own country, Dominica, including coordinator of the National AIDS Program, coordinator for national disasters in the Ministry of Health, president of the National Committee on HIV/AIDS, and director of Primary Health Care Services. She began her career as a medical officer in Princess Margaret Hospital, where she rose to the post of Medical Director.

Etienne received her degree in medicine and surgery from the University of the West Indies in Jamaica and a master's degree in community health in developing countries from the London School of Tropical Medicine and Hygiene.