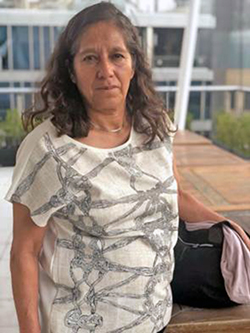 Mexico City, April 9, 2018 (PAHO / WHO) - Reyna is a 56-year-old Mexico City resident who manages a restaurant at a bus terminal in Venustiano Carranza Colony, on the city's east side. She was diagnosed with type 2 diabetes 14 years ago, joining the more than 62 million adults in the Americas who live with a disease that, if left untreated, can cause serious complications such as heart attack, stroke, blindness, kidney failure, amputation of the lower limbs, and even death.

Every month, Reyna visits a health clinic run by Mexico's social security system, where she gets a check-up and the medicines she needs. Fully aware of the importance of controlling her blood sugar levels, Reyna follows her treatment regimen strictly and has managed to stay healthy and avoid long-term complications so far.

It helps that Mexico has significantly lowered the costs of drugs for diabetes and other common illnesses under a policy of the Federal Commission for Protection against Health Risks (COFEPRIS, for its initials in Spanish) that has expanded access to generic drugs. Thanks to the resulting cost savings, beneficiaries of Mexico's public system receive their medicines at no cost.

For Reyna, that includes not only her diabetes medication (metformin) but also her cholesterol-lowering medication (pravastatin) and acetylsalicylic acid (aspirin) to prevent blood clots. All these medicines are generics.

Since 2012, COFEPRIS has authorized the introduction of over 540 new generics used for the treatment of 21 health problems that account for around 70% of Mexico´s main causes of mortality.

The impact of this strategy has been twofold. It has led to important savings on drug purchases in the public sector, which in turn has allowed an increase in the volume of medicines purchased. It has also resulted in much lower prices of medicines in the market, making medicines much more accessible for the Mexican people.

Between 2011 and 2016, average monthly spending on medicines by the public sector was cut nearly in half, from $894 million pesos (around US$50 million) in 2012 to $460 million pesos (around US$25 million) in 2016. In the same period, the total volume of medicines purchased by the public sector quadrupled from 4.4 million units to 18.4 million units. Meanwhile, the market price of medicines corresponding to the new generics decreased by an average 61%.

Recently, one of Reyna´s children fell ill with an infectious disease and was prescribed six injections of a brand-name antibiotic, which they had to purchase. The experience made Reyna feel fortunate to have free monthly access to the medicines she will need to take for the rest of her life.

"If I had to pay for my medicines, I would have to stop doing other important things in my life. If one of my children developed diabetes and we had to buy brand medicines at the drugstore, my family couldn´t afford the expense," she said.

To achieve universal health-the theme of this year's World Health Day-countries need to expand access to quality, low-cost generic medicines that protect the health of their populations, especially given the increase in chronic diseases such as diabetes, which requires lifelong treatment. Producing or purchasing generic drugs, as promoted by the Pan American Health Organization (PAHO), can help countries save money and expand access to drugs.

"In COFEPRIS, we have no doubt that the implementation and follow-up of a policy focused on generic drugs is key to keeping the market accessible and well supplied with quality products at the best price. This strategy has achieved important results in increasing access to medicines for patients, with major benefits for their health," said Julio Sanchez y Tepoz, Federal Commissioner for the Protection Against Health Risks.

Reyna has learned to take care of herself and live with diabetes. She swims regularly, watches her diet, tries to keep her emotions steady, goes to all her health check-ups and follows the recommendations of her healthcare providers. She knows that her medicines go hand in hand with healthy food intake and her personal commitment to caring for her own health.