Breaking down barriers to healthcare access for transgender people in Argentina

Buenos Aires, April 17, 2018 (PAHO) - Nadir Cardozo proudly displays her ID card. Nadir is a transgender woman, and since Argentina passed the Gender Identity Law in 2012, she and others have had the right to have their personal documents issued with the name and gender of their choice. This measure has enabled many women like Nadir, who once shied away from visiting a health center for fear of ridicule and discrimination, to do so and take care of her health.

"There is still a lot of intolerance, but there are positive changes that were unthinkable 20 years ago."

"The paradigm has shifted, and progress has been made in some areas, but there have been setbacks as well. There is still a lot of intolerance, but there are positive changes that were unthinkable 20 years ago," says the 46-year-old Argentine, who has worked for many years to promote respect for the rights of transgender people, including the right to health. "The problem is that change is slow, and many trans women are dying," she says. 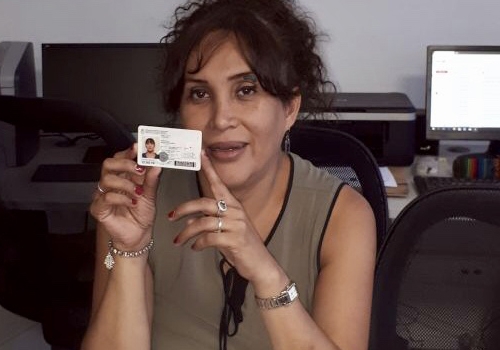 An important step forward was the passage of the national Gender Identity Law in 2012. It allows personal documents to be issued with the name and gender of a person's choice without requiring a previous psychological or medical evaluation. It also makes sex reassignment treatment part of the Programa Médico Obligatorio ("Compulsory Medical Program"), thus guaranteeing coverage across all the health systems in Argentina.

Nadir came to Buenos Aires from the northern province of Jujuy at the age of 20, facing a hard road ahead, with many challenges. She recently got her first formal job at the age of 45: a position in Fundación Huésped, an organization devoted to promoting sexual and reproductive health rights, with a focus on communicable diseases.

"Workforce inclusion and access to education and health are still lacking."

"The law represented a 180-degree turn," explains Nadir, "but workforce inclusion and access to education and health are still lacking." In other words, social determinants of health such as those mentioned by Nadir are still key to achieving universal health, which is the theme of this year's World Health Day, promoted by the World Health Organization (WHO) and the Pan American Health Organization (PAHO).

Blueprint for the provision of comprehensive care for transgender people

Transgender people face a range of health problems that reflect their vulnerability. High levels of exposure to violence, mental health issues, a high prevalence of sexually transmitted infections, high consumption of alcohol and other psychoactive substances, the adverse effects of self-administered hormones, and reproductive health issues are some of the problems documented in the report Blueprint for the Provision of Comprehensive Care for Trans Persons and their Communities in the Caribbean and Other Anglophone Countries, published jointly by PAHO/WHO and several organizations working in this field.

"When they go to a hospital, they are sometimes laughed at, and if managers have not received training, are treated like men."

According to this publication, Argentina reports an HIV prevalence rate of 34% among trans persons, the group most affected by the epidemic. The Argentine Association of Transvestites, Transsexuals and Transgenders (ATTTA in Spanish) participated in the report's development. The challenges are many. "Today, many trans persons live from day to day, and the majority of trans women are sex workers. They come alone from the provinces and are not covered by social security. When they go to a hospital, they are sometimes laughed at, and if managers have not received training, are treated like men. This leads some of them to avoid contact with the health services," Nadir says.

Efforts to raise awareness are moving forward on two tracks: civil society organizations are working to educate the population about the rights of transgender persons and at the same time, to empower that community to exercise those rights.

Three public hospitals-Muñiz, Ramos Mejía, and Fernández-in Buenos Aires have "transliving (Transvivir) areas," where a group of health promoters makes rounds to visit the trans patients, provide them with essential information, offer support, and verify that they are in wards corresponding to their gender preference. This service is managed by ATTTA.

"Everyone should be seen in a general clinic. Trans persons should have jobs, and equality should be a reality."

Several hospitals in the country also have inclusive outpatient clinics that provide care for the LGBT community. "Ideally, these clinics should not exist," says Nadir. "Everyone should be seen in a general clinic. Trans persons should have jobs, and equality should be a reality. However, we are in a transitional period."

There are positive signs, however. Nadir points to Casa Trans ("Trans House"), a community center for the training and empowerment of transgender people founded in Buenos Aires in 2017 by ATTTA and the municipal government. At Casa Trans, "we have a high school program where trans people can complete their primary and secondary education and obtain an official diploma," Nadir says, adding that she is confident that transgender students today "are going to have a different experience than many of us did."