Havana, Cuba, 23 April 2018 (PAHO/WHO) - The most important vaccination initiative on the continent, Vaccination Week in the Americas, kicked off today in Cuba for the first time. As part of this campaign, led by the Pan American Health Organization (PAHO) since 2003, 70 million people will be vaccinated against more than a dozen dangerous diseases.

"Vaccination is one of the most powerful tools we have to prevent disease and save lives," said Carissa F. Etienne, Director of PAHO, at the opening ceremony of Vaccination Week in the Americas, which took place at the Victoria de Giron Institute of Basic and Preclinical Sciences in Havana. Ministers and other high-level health authorities from Latin America, the Caribbean, and other regions of the world participated in the launch.

Cuba was chosen to host the regional launch of the campaign because of the great strides the country has made in vaccine development and in eliminating vaccine-preventable diseases, including polio, neonatal tetanus, diphtheria, measles, rubella, congenital rubella syndrome, whooping cough and mumps, said Etienne. "Cuba is a shining example of commitment, investment and passion for health."

Tedros Adhanom Ghebreyesus, Director General of the World Health Organization (WHO), also participated in the regional launch of Vaccination Week in the Week in the Americas, which has served as the base for World Immunization Week since its start in 2012. "Not only does Cuba enjoy universal coverage for vaccines, (it is) also a producer and exporter of these life-saving products," said Dr. Tedros. "World Immunization Week is an opportunity to remind all nations and all people of the incredible value of vaccines."

Vaccination saves around three million lives each year from diseases such as measles, whooping cough and diarrhea, and more children are now being vaccinated than ever before. Despite these advances, however, there are still millions more children missing out.

"Vaccination is available to everyone, free of charge, and can be accessed from primary health care providers"

During the opening ceremony, the Cuban Deputy Health Minister, Jose Angel Portal Miranda, emphasized that in Cuba "vaccination is available to everyone, free of charge, and can be accessed from primary health care providers. As a result, vaccination coverage in Cuba for all vaccines currently stands at 98%, resulting in high population immunity."

Portal Miranda also highlighted that an average of 4.8 million vaccines against 13 diseases are administered each year in Cuba, with eight of the 11 vaccines that are given being produced in the country itself. He also reminded the audience that the first polio prevention campaign in Cuba took place in 1962 with the vaccination of 2.6 million children and adolescents under the age of 15. Thanks to this and other initiatives, the country was the first in the region to eliminate polio.

Immunization is crucial to achieving universal health, the philosophy of which is centered on ensuring that all people of all ages everywhere have easy access to free, quality healthcare whatever their income level. It is estimated that increasing access to vaccination in low and middle-income countries by 2030 would prevent 24 million people from experiencing poverty due to healthcare-related costs.

Vaccination Week is an opportunity to increase immunization and ensure that everyone has access to vaccination. During the campaign, thousands of health workers from all over the Americas will also place a particular emphasis on reaching vulnerable populations and those with limited access to healthcare services.

"It is the responsibility of each country to ensure high levels of vaccination coverage, particularly at the local level, in order to prevent and control these outbreaks"

Thanks to vaccination programs, the American continent has eliminated six vaccine-preventable diseases: smallpox, polio, measles, rubella, congenital rubella syndrome, and neonatal tetanus. Despite this, however, there are currently outbreaks of measles, diphtheria and yellow fever in the Region and in other parts of the world.

"It is the responsibility of each country to ensure high levels of vaccination coverage, particularly at the local level, in order to prevent and control these outbreaks," said Etienne.

Within the framework of Vaccination Week in the Americas, 11 countries have already committed to strengthening measles immunization programs through the vaccination of six million people, and five countries will vaccinated against yellow fever.

The XVI Vaccination Week in the Americas will take place until 28 April under the slogan "Strengthen your defense! #GetVax #VaccinesWork." From its initiation in 2003, the campaign has led to the vaccination of more than 720 million people of all ages.

The hosts of previous Vaccination Week in the Americas regional launches include Mexico, Jamaica, Belize-Guatemala, Uruguay and Haiti.

During the launch event, the Director of PAHO awarded a prize to the Cuban Health Specialist Miguel A?ngel Galindo Sardin?a for his life-long commitment to vaccination. Galindo, who is now 85 years of age, led the country's National Immunization Program and developed its first polio vaccination campaign 55 years ago. 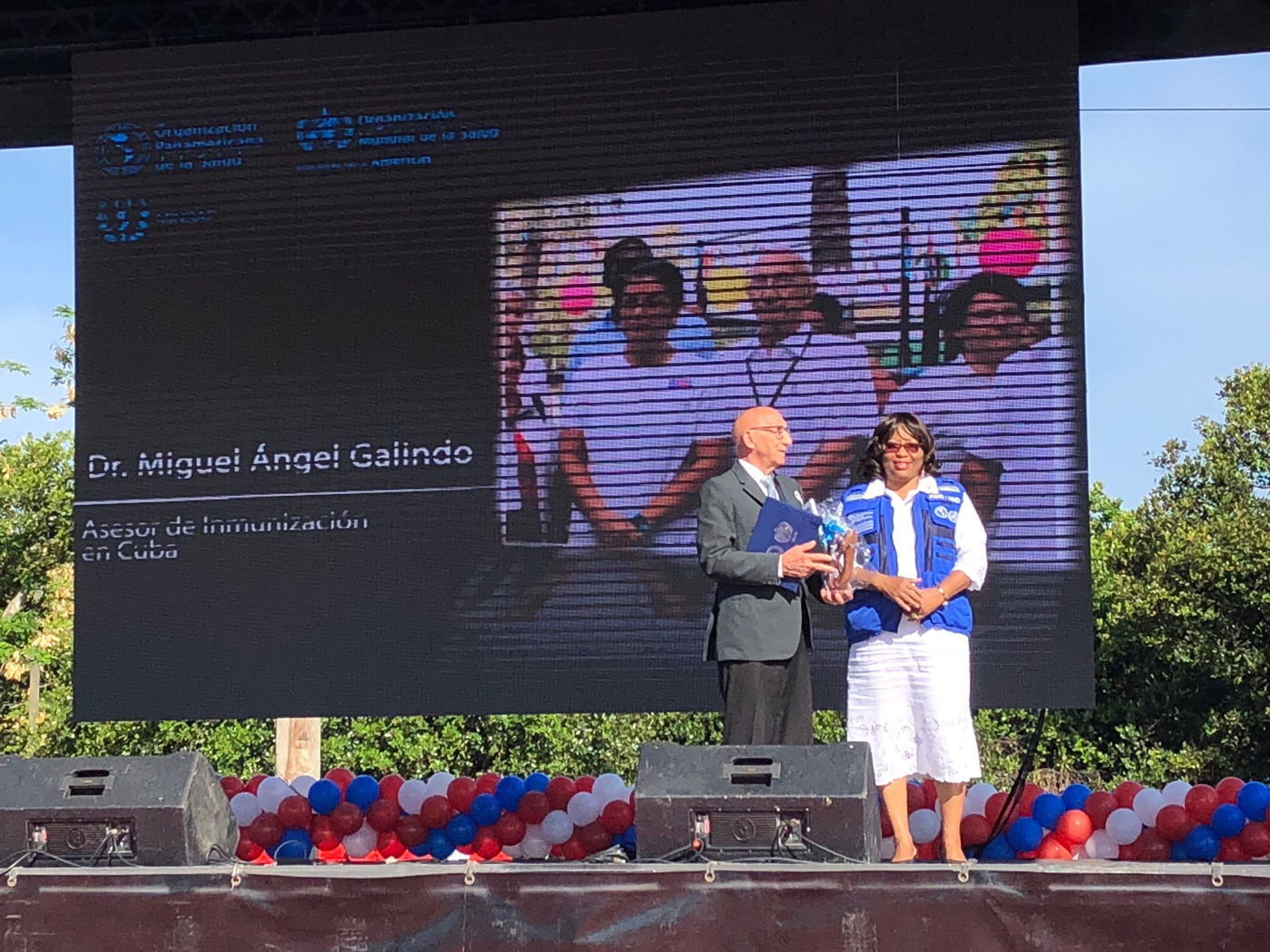 As well as his professional roles, Galindo also received the Distinguished Public Health Worker Prize in 1997. He was made an honorary member of the Dominican Pediatric Society in 1991, and in 1999 received the WHO Immunization Prize.

- XVI Vaccination Week in the Americas
- Epidemiological Update - Measles (April 6 2018)
- PAHO urges countries to vaccinate against measles to maintain its elimination in the Americas
- Video: Message from the Director of PAHO, Carissa F. Etienne #GetVax #VaccinationsWork