Protecting achievements; expanding diagnosis and treatment; and preventing mother to child transmission - All vital elements of the fight against Chagas

Washington, D.C. 7 May 2018 (PAHO/WHO) - With vector transmission of Chagas interrupted in 17 out of 21 affected countries in the Americas, and screening for the disease in blood banks universalized, the future of the fight against the disease must now focus on maintaining achievements and preventing congenital transmission.

This was the conclusion of a meeting convened by the Pan American Health Organization (PAHO) in Washington D.C. on the 3-4 May 2018 to discuss the current status of Chagas, as well as future management of the disease. 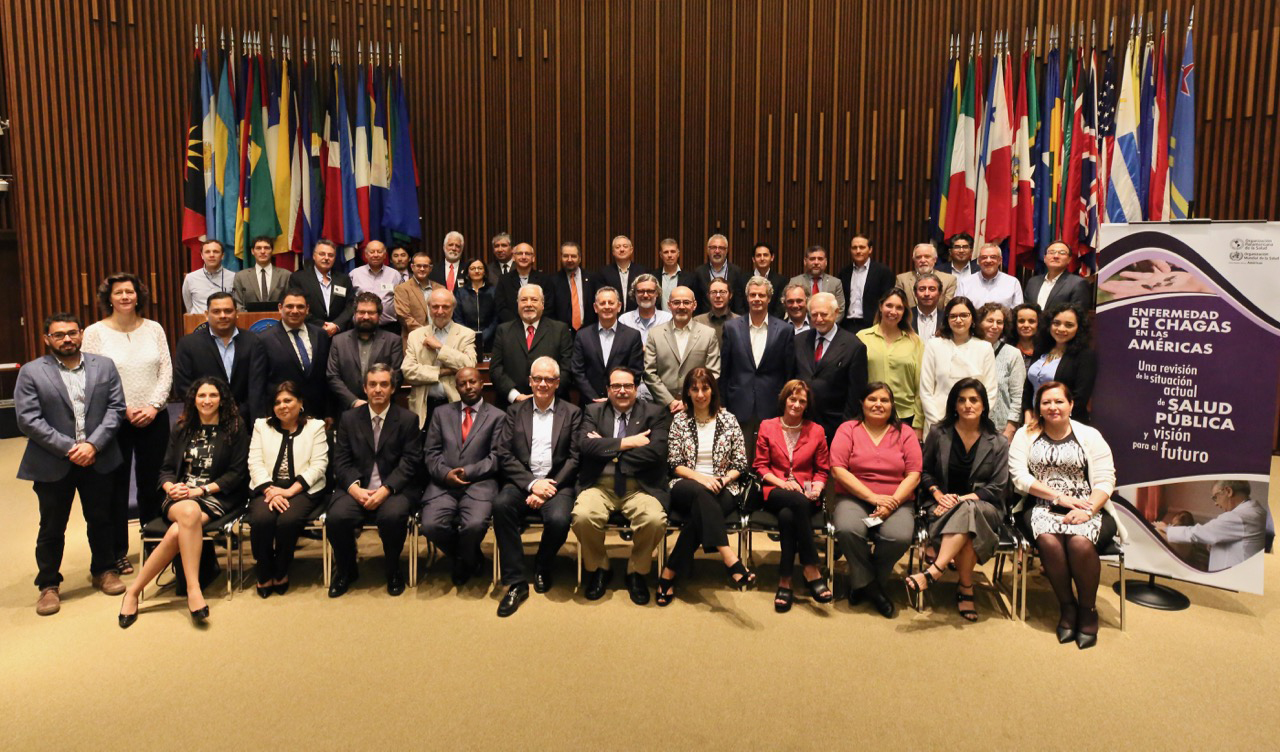 "The region has made considerable advances in addressing Chagas since the 1990s, and this meeting has marked a point of inflection at a time when the dynamics and epidemiology of the disease has changed," said Luis Gerardo Castellanos, Head of the Neglected, Tropical and Vector-borne diseases Unit at PAHO/WHO.

"The occurrence of new cases has reduced in all countries, but around six million people still live with the disease, many of whom are unaware of their status. The migration of people from endemic areas to urban areas also means that we must take measures to detect and treat everyone affected, including those in cities," he said.

Chagas is a parasitic, systemic, and chronic disease caused by the protozoan Trypanosoma cruzi. The parasites are mainly transmitted to humans by triatomine bugs, known as "kissing bugs," but can also be transmitted via blood transfusions, organ transplants, the consumption of contaminated food, and from mother to child during gestation.

It is estimated that there are 30,000 new reported cases of Chagas each year in the Americas and 14,000 people die as a result of the disease. More than 70 million people live in areas where there is high-risk of transmission.

"Chagas is a silent disease that tends to pass undetected, either by health care professionals with little experience in its diagnosis, or by patients themselves, who experience few if any symptoms," explained Roberto Salvatella, PAHO/WHO Regional Advisor for the Prevention and Control of Chagas. "We need to integrate the treatment of Chagas into the health system of each country so that healthcare workers are better aware of the disease and can provide necessary treatment," he added.

It is estimated that in the long term, 30% of chronic infections will develop complications that will have serious and irreversible consequences on the nervous system, the digestive system and the heart. If the disease is detected in time, however, it can be cured and prognosis improved. Even if diagnosed during the chronic phase, treatment can still prevent or delay its progress.

Salvatella also highlighted the need to continue efforts to eliminate the vector transmission of Chagas in countries that have still not been able to do so, and to improve information systems in order to ensure access to the latest data about the disease.

Those present at the meeting also agreed that preventing the transmission of Chagas from mother to child should be a primary area of focus and resources. Mother to child transmission is now the main source of infection in countries that have controlled vector transmission and applied universal screening at blood banks. This is the case for Argentina, Brazil, Chile, Honduras, Paraguay, Nicaragua and Uruguay, among others.

Around 9,000 babies are born each year with Chagas in the Americas, accounting for 30% of all new infections. A baby born to a mother infected with Chagas has between a 2 to 8% chance of contracting the disease during gestation and birth.

In 2017, PAHO launched a new framework to prevent mother to child transmission of four diseases, including Chagas, by 2020. It is estimated that around 1.1 million women of child-bearing age in the region are infected with the T.cruzi parasite.

In order to prevent this type of transmission, PAHO recommends the implementation of universal screening of pregnant women and newborns in order to identify their status and, if necessary, start curative treatment. It is also advised that if a woman tests positive for Chagas, her other children should also be diagnosed and treated.

Improving access to the prevention, diagnosis and treatment of Chagas for women and children falls in line with the universal health strategy of PAHO, which aims to ensure health for all, with no one left behind.

Also in attendance was Felipe Guhl Nannetti, Director of the Tropical Parasitology Research Centre (CIMPAT); Oscar Ledesma, Director of Ministry of Health of Santiago del Estero's Center for Chagas Disease and Regional Pathology, in Argentina; as well as consultants Alejandro Luquetti from Brazil, and Hector Freilij, from Argentina.

Honduras and Nicaragua eliminate the main vector of Chagas

In April, an international committee of independent experts convened by PAHO/WHO recognized Honduras and Nicaragua as having achieved the elimination of the main vector of Chagas (Rhodnius prolixus) in their territories.

Since 2010, both countries have maintained the interruption of vector transmission in homes, becoming the latest in the region to achieve this goal following the state of Sao Paulo, Brazil in 2014 and Uruguay in 2013 with the Triatoma infestans vector. The committee recognized that the elimination had been achieved thanks to sustained vigilance and vector control measures.

- Chagas Disease in the Americas: A Review of the Current Public Health Situation and a Vision for the Future. Conclusions and Recommendations
- Neglected Infectious Diseases in the Americas