Geneva, 26 May 2018 (PAHO/WHO)- The 71st World Health Assembly wrapped up its sessions today by adopting a number of resolutions on the most relevant public health issues.

Delegates from across the globe adopted resolutions on the WHO general programme of work for the next five years, WHO's work in emergencies, poliomyelitis, cholera, noncommunicable diseases and tuberculosis, the shortage of medicines and vaccines, and the burden of snakebites, among other topics.

Closing the Assembly, the Director-General of WHO, Dr Tedros Adhanom Ghebreyesus, told delegates to the World Health Assembly today that they had charted a new course for the Organization. He said that everything WHO did going forward would be evaluated in the light of the "triple billion" targets which were approved this week in WHO's new five-year strategic plan. By 2023 the targets aim to achieve: 1 billion more people benefitting from universal health coverage; 1 billion more people better protected from health emergencies; and 1 billion more people enjoying better health and wellbeing. 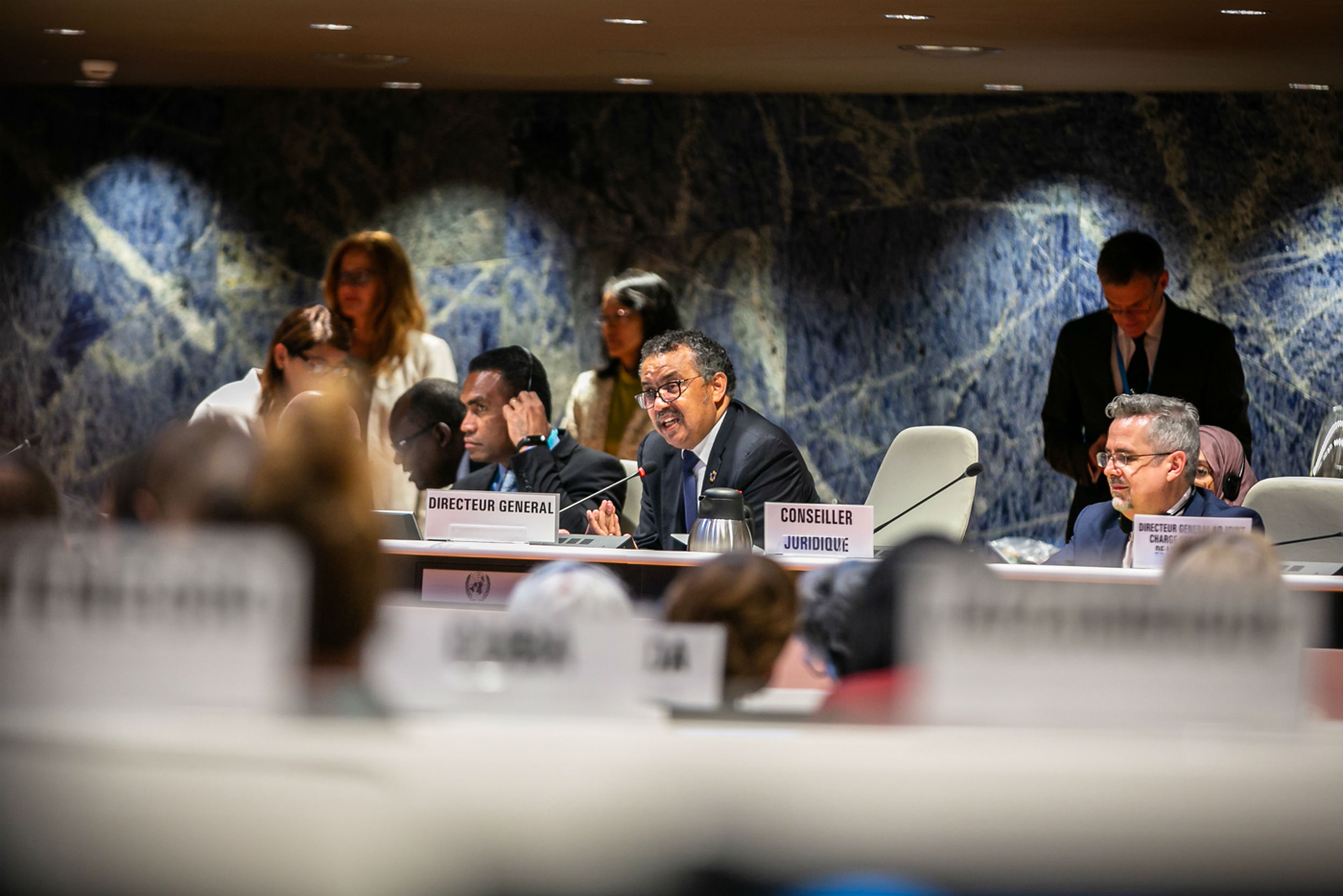 Dr. Tedros told delegates the true test of whether the discussions held in the Assembly this week were successful would be whether they resulted in real change on the ground and he urged them to go back to their countries with renewed determination to work every day for the health of their people.

"The commitment I have witnessed this week gives me great hope and confidence that together we can promote health, keep the world safe, and serve the vulnerable," he concluded.

On the final day of the Assembly, delegates also came to an agreement on maternal, infant and young child nutrition and on poliovirus containment. The day before, they agreed on a five-year global strategic plan to improve public health preparedness and response, through implementation of the International Health Regulations, digital health, snakebites and physical activity.

Delegates unanimously renewed their commitment to invest and scale up nutrition policies and programmes to improve infant and young child feeding.

Member States discussed efforts to achieve the World Health Assembly Global Nutrition Targets, concluding progress has been slow and uneven, but noted a small step forward in the reduction of stunting, with the number of stunted children under 5 years falling from 169 million in 2010 to 151 million in 2017.

WHO is leading global action to improve nutrition, including a global initiative to make all hospitals baby friendly, scaling up prevention of anaemia in adolescent girls, and preventing overweight in children through counselling on complementary feeding. A new report was launched on the implementation of the Code of Marketing Breastmilk Substitutes, highlighting that 6 more countries had adopted or strengthened legislation in 2017 to regulate marketing of breastmilk substitutes.

With wild poliovirus transmission levels lower than ever before, and the world closer than ever to being polio-free, discussions focused on securing a lasting polio-free world. As at May 2018, only 9 cases due to wild poliovirus had been reported globally, from Afghanistan and Pakistan. Delegates reviewed emergency plans to interrupt the last remaining strains of the virus.

To prepare for a polio-free world, global poliovirus containment activities continue to be intensified, and Member States adopted a landmark resolution on poliovirus containment. In a limited number of facilities, poliovirus will continue to be retained, post-eradication, to serve critical national and international functions such as the production of polio vaccine or research. It is crucial that poliovirus materials are appropriately contained under strict biosafety and biosecurity handling and storage conditions to ensure that the virus is not released into the environment, either accidentally or intentionally, to again cause outbreaks of the disease in susceptible populations.

Delegates welcomed a proposed five-year global strategic plan to improve public health preparedness and response, through implementation of the International Health Regulations, an international legal instrument that is binding on 196 countries across the globe with the aim to help the international community prevent and respond to acute public health risks that have the potential to cross borders and threaten people worldwide.

In 2017, WHO recorded a total of 418 public health events in its event management system: the initial source in reporting 136 of these was national government agencies, including National IHR Focal Points. The new strategy aims to help countries strengthen the core capacities they need to implement the regulations, including more reporting through IHR.

Delegates considered the report by the Director-General on progress to implement decision WHA70(10) on Review of the Pandemic Influenza Preparedness Framework. The Health Assembly approved all the recommendations in the Director-General's report but requested that the final text of the analysis should be submitted in 2019 rather than 2020.

Delegates agreed on a resolution on digital health that urges Member States to prioritize the development and greater use of digital technologies in health as a means of promoting Universal Health Coverage and advancing the Sustainable Development Goals.

WHO will have to develop a global strategy on digital health and supports the scale-up of these technologies in countries by providing technical assistance and normative guidance, monitoring trends and promoting best practices to improve access to health services.

The resolution also asks Member States to identify priority areas in which they would benefit from WHO assistance, such as implementation, evaluation and scale up of digital health services and applications, data security, ethical and legal issues. Examples of existing digital health technologies include systems that track disease outbreaks by using "crowdsourcing" or community reporting; and mobile phone text messages for positive behaviour change for prevention and management of diseases like diabetes.

Delegates agreed a resolution that aims to reduce the number of people around the world who are either killed or are physically or mentally disabled by snakebite. An estimated 1.8 - 2.7 million people are bitten by venomous snakes each year, with between 81 000 and 138 000 people dying as a result. For every person who dies following a snakebite, another four or five are left with disabilities such as blindness, restricted mobility or amputation, and post-traumatic stress disorder.

Acknowledging the urgent need to improve access to safe, effective and affordable antivenoms for snakebite, delegates urged WHO to accelerate and coordinate global efforts to control snakebite ‘envenoming' - the life-threatening disease that follows the bite of a venomous snake.

Member States endorsed the WHO Global Action Plan on Physical Activity (GAPPA), a new initiative aimed at increasing participation in physical activity by people of all ages and ability to promote health and beat noncommunicable diseases, including heart disease, stroke, diabetes and breast and colon cancer, and support improved mental health and quality of life.

Worldwide, 23% of adults and 81% of adolescents aged 11-17 years do not meet the global recommendations for physical activity. Prevalence of inactivity is as high as 80% in some adult populations influenced by changing patterns of transportation, use of technology, urbanization and cultural values.

The plan's goal is a 15% reduction in the global prevalence of physical inactivity in adults and in adolescents by 2030.

Assistive technology, such as wheelchairs, hearing aids, walking frames, reading glasses and prosthetic limbs, enables people with difficulties in functioning to live productive and dignified lives, participating in education, the labour market and social life. Without such technology, people with disabilities and older people and others in need are often excluded, isolated and locked into poverty, and the burden of morbidity and disability increases.

An estimated 1 billion people would benefit from assistive products, a number that will rise to more than 2 billion by 2050. Yet 90% do not have access, owing to high costs and a lack of availability.

Delegates agreed a resolution calling for WHO to launch a coordinated global response to rheumatic heart disease, which affects around 30 million people each year. In 2015, the disease was estimated to have caused 350 000 deaths. The disease most commonly occurs in childhood and disproportionately affects girls and women.

Rheumatic heart disease is a preventable condition arising from acute rheumatic fever. Despite the availability of effective measures for prevention and treatment of the disease, cases have not significantly declined in recent years.

Region of the Americas Highlights

Delegations from the Region of the Americas actively participated in this Assembly, from negotiating the approved resolutions to organizing side events on topics of interest. A summary follows: