On 27 June 2018, the conditions for the entry into force of the Protocol to Eliminate Illicit Trade in Tobacco Products were met with the ratification of the United Kingdom of Great Britain and Northern Ireland. As such, the required 40 Parties to the Protocol was reached, for its entry into force on September 25, 2018. This achievement is a milestone in the history of tobacco control internationally. 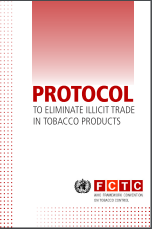 Illicit trade in tobacco products poses a serious threat to public health by increasing the accessibility and affordability of tobacco products, thus undermining tobacco control policies and fueling the tobacco epidemic. Countering illicit trade in tobacco products is a key aspect of comprehensive tobacco control policies. The Protocol to Eliminate Illicit Trade in Tobacco Products, now the first legally binding instrument adopted under the WHO Framework Convention on Tobacco Control (FCTC), seeks the elimination of all forms of illicit trade in tobacco products and sets forth a range of measures to prevent illicit trade, promote law enforcement, and to provide the legal basis for international cooperation. Its entry into force, will allow the Parties to hold the First session of the Meeting of the Parties to the Protocol (MOP1) in Geneva, Switzerland following the Eighth Conference of the Parties (COP8) of the WHO FCTC. To date, Parties to the Protocol in the Region of the Americas include Brazil, Costa Rica, Ecuador, Nicaragua, Panama, and Uruguay.

A second tobacco control milestone is the ruling of a WTO Panel against complaints brought by several countries against Australia's tobacco packaging law, which implements the WHO Framework Convention on Tobacco Control and its Guidelines.

The panel decided that Australia's policy on plain packaging is consistent with WTO law. The ruling clears another legal hurdle raised by the tobacco industry and is likely to accelerate implementation of plain packaging around the globe.

In December 2012, Australia was the first country to fully implement tobacco plain packaging (also known as "standardized packaging"). Plain packaging prohibits the use of logos, colors, brand images and promotional information on tobacco products and packaging, other than brand and product names in a standardized color and font.

Currently, six other countries have implemented plain packaging laws (Hungary, Ireland, France, New Zealand, Norway and the United Kingdom), another six have passed laws yet to be implemented (Burkina Faso, Canada, Georgia, Romania, Slovenia and Thailand) and several other countries are examining the policy.

The WHO and the WHO FCTC Secretariat provided the WTO Panel with a joint submission or amicus brief. This brief provided an overview of global tobacco control, summarized the public health evidence underlying tobacco plain packaging and the relevant provisions of the WHO FCTC and its Guidelines.

PAHO will continue working with Member States to strengthen tobacco control in the Americas, both through the ratification and implementation of the Protocol to Eliminate Illicit Trade in Tobacco Products as well as the adoption of effective packaging and labeling of tobacco products, including plain packaging.