Meeting of Health Ministers at PAHO opens with call for countries to improve collaborative working in order to face challenges, reduce inequalities and ensure that “no one gets left behind.”

Washington, D.C, 23 September 2018 (PAHO/WHO)– Despite the successes and historic milestones achieved in public health over the past few decades, the Region of the Americas is facing challenges that are putting its achievements at risk and potentially diminishing its ability to overcome new and emergent challenges, said the Director of the Pan American Health Organization (PAHO), Carissa F. Etienne, during the opening ceremony of the Organization’s 56thDirecting Council.

“Factors such as extreme weather events and natural disasters; failure of climate change mitigation and adaptation; large scale migration; low social cohesion; societal violence; weak governance capacities; profound social instability and the spread of infectious diseases are negatively impacting conditions of health and well-being in our Region,” said Etienne. She called on countries “to develop innovative ideas and creative solutions for some of our most pressing problems” in health. 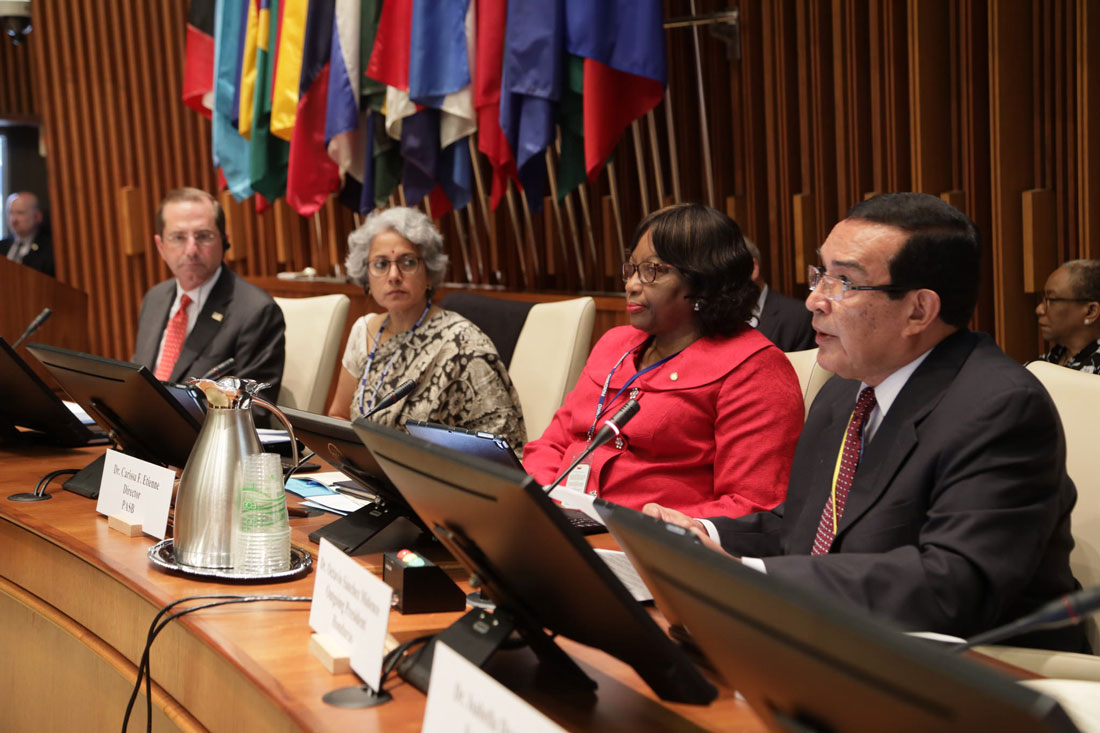 Etienne also referred to the migration crisis that the Region is experiencing. “We are all too aware that the health and well-being of migrants is at risk and that migration can be a significant contributor to the spread of some communicable diseases, as evidenced by the recent spread of measles and malaria incountries of this Region over the past 12 months,” she said.

The Director of PAHO highlighted that while the Region has made progress in some areas, evidence suggests that “inequalities persist”, particularly within countries, and that if the Region is to meet the goals outlined in the 2030 Sustainable Development Agenda “targeted and ambitious support” is required “for individuals in fragile circumstances and environments in order to ensure they are not left behind.”

She therefore called on the ministers and delegates participating in the 56thDirecting Council to “strengthen solidarity within and between countries in order to reduce uncertainty, instability and fragility. We must rebuild solidarity if we are to achieve the 2030 Sustainable Development Agenda and leave no one behind,” concluded the Director of PAHO.

The United States Secretary of Health and Human Services, Alex Azar II, highlighted that WHO and the Pan American Health Organization have an “impressive legacy of fighting against diseases and promoting better health for their populations,” and should work together to ensure a healthy future.

Azar emphasized that “preparing for the threat of infectious diseases must be a priority for the entire Region and the world.” Referring to the situation in Venezuela, he indicated that these diseases do not respect borders “and can spread quickly through travel of migration” affecting the health, safety and prosperity of populations.

The Minister of Public Health of Honduras and outgoing president of the PAHO Directing Council, Octavio Sánchez Midence, stated that “while there have been advances in health at the global and regional levels, challenges persist when it comes to sustaining these achievements and responding to emergency situations and emerging and re-emerging diseases.”

Sánchez Midence highlighted that the meeting of ministers this year “will have an impact on the protection of health, particularly of the most vulnerable.” He also emphasized that addressing challenges “will require collaborative efforts from countries, as well as the continued support of WHO, PAHO and other international organizations.”

Néstor Méndez, the Assistant Secretary General of the Organization of American States (OAS), said that health is the pillar of development in the Region and should be considered a human right, not a privilege. He added that the Region continues to suffer from persistent inequalities that affect its development. He referred to the challenges posed to countries from issues such as natural disasters, as well as migratory flows. “If we are to ensure a healthy future for all, we must protect the most vulnerable,” he concluded.

The Deputy Director General for Programs of the World Health Organization, Soumya Swaminathan, said that while the Americas has experienced many advances towards improving the health of the population, challenges persist. “We cannot achieve anything alone,” she said. “We need innovative partnerships in order to achieve the SDGs.”

This week, during the 56thDirecting Council, health authorities from across the Region will discuss a series of plans to reduce the shortage in health personnel, lower the number of deaths from cervical cancer, and improve the health of women, children and adolescents. They will also discuss plans to improve the control of vectors that transmit diseases such as malaria, zika and Chagas.