A presentation for delegates to the 56th PAHO Directing Council, 40 years after the Alma-Ata Declaration

Washington, D.C., 24 September 2018 (PAHO/WHO) – A preliminary report that identifies progress, challenges and recommendations for achieving universal health in the Americas 40 years after the Declaration of Alma-Ata was presented today to ministers of health and other delegates from throughout the Americas during a side event at the 56th Directing Council of the Pan American Health Organization (PAHO).

The report was presented by members of the High-level Commission on “Universal Health in the 21st Century: 40 Years of Alma-Ata,” led by Michelle Bachelet, former president of Chile and currently United Nations High Commissioner for Human Rights. The High-level Commission was formed in 2017 by PAHO Director Carissa F. Etienne to contribute to regional efforts to make universal health a reality in the Americas.

“It is only through inclusive and participatory approaches that give voice to the unheard that we will achieve the right to health for everyone, everywhere.” 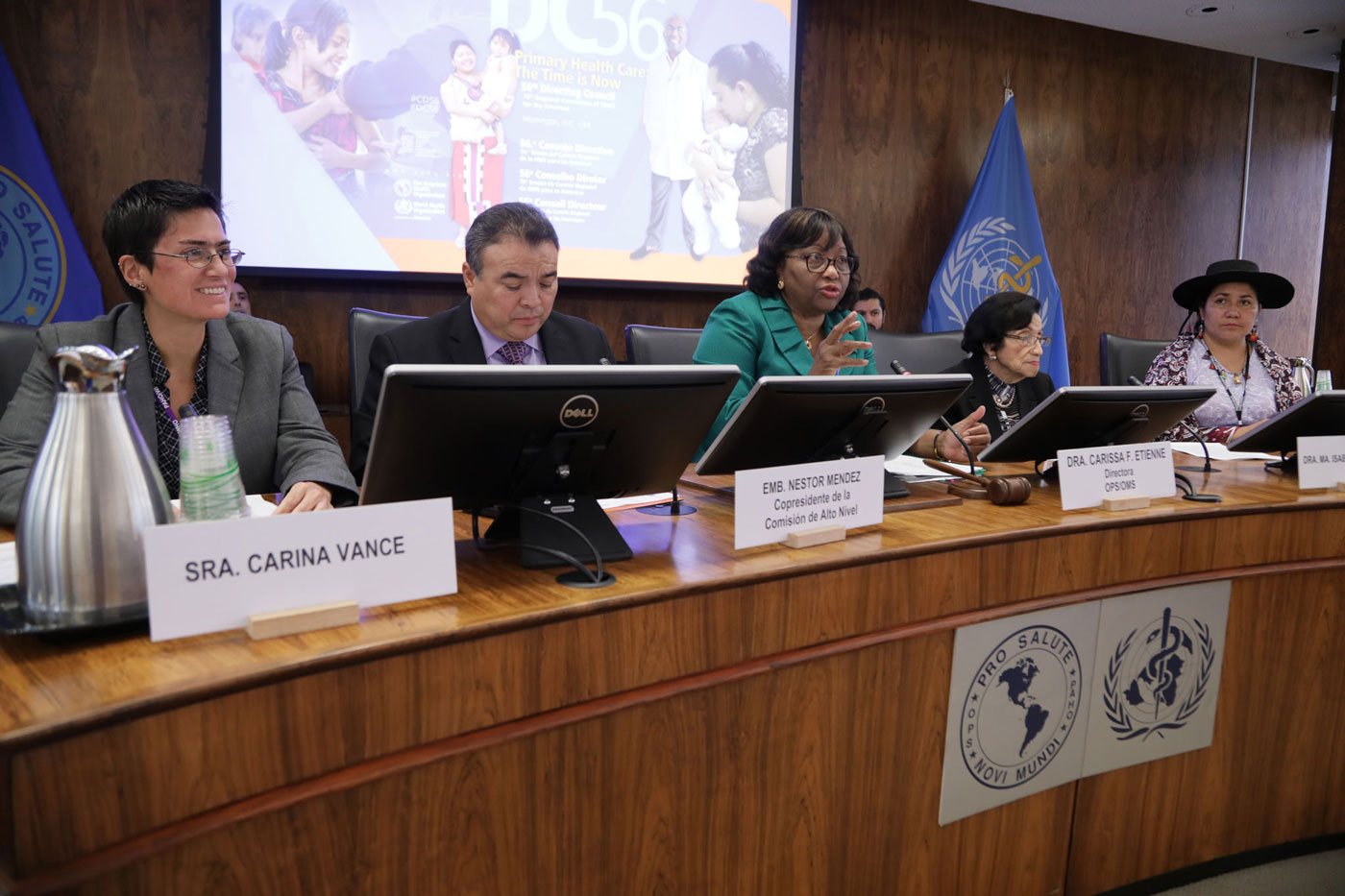 Etienne said the final version of the Commission’s report, expected to be ready by April 2019, will identify challenges and ideas for overcoming barriers to access to health so that no one is left behind. “It is only through inclusive and participatory approaches that give voice to the unheard that we will achieve the right to health for everyone, everywhere,” she said.

In a recorded message, Bachelet said that the commission “will continue its hard work on universal access and universal coverage for all.” She said she also plans to advocate for those principles in her post as UN High Commissioner for Human Rights.

Carina Vance, former minister of health of Ecuador, director of the South American Institute of Government in Health, and a member of the High-level Commission, said that “we continue to work toward health for all,” the goal set in the 1978 Alma-Ata Declaration. “The progress we have made means that millions of people are better off. But deep inequities, which in some cases are even worse than before, keep health beyond the reach of millions of others in our region.”

The High-level Commission, made up of 19 experts from the Region of the Americas, is tasked with making recommendations in five thematic areas: health care models, human resources for health, health systems financing, social protection, and institutional models.

General recommendations being developed by the Commission include strengthening of the institutional capacity of ministries of health to play a steering role in health as well as for effective regulation, planning, coordination, and management of health systems and their critical resources (human resources, financing, medicines and technologies, among others) with capacity for intersectoral action.

The Commission is also developing recommendations on an integrated model of health care based on intersectoriality, interculturality, and effective social participation that captures the diversity of people and communities, with integrated networks of health services in which the first level of care is the nexus of the system.

In alignment with the Sustainable Development Agenda 2030, the Commission will advocate for closing gaps in equity and equality, confronting structural racism and other forms of racial discrimination and exclusion. The Commission calls for overcoming social exclusion that is a barrier to access and health care for historically marginalized people and for the promotion of social protection instruments that contribute to the universalization of health and the reduction of health inequalities.

Achieving universal health by 2030 is one of the commitments made by world leaders in the Sustainable Development Agenda 2030. In 2014, PAHO Member States approved the Strategy for Universal Access to Health and Universal Health Coverage, which reaffirms their commitment to the values and principles of the Declaration of Alma-Ata and the Primary Health Care (PHC) strategy.

— Michelle Bachelet of Chile will chair PAHO commission tasked with advancing universal health in the Americas
— High-level Meeting on Universal Health in the 21st Century: 40 Years of Alma-Ata