Mayors of the Americas commit to revitalizing the Healthy Municipalities, Cities, and Communities Movement 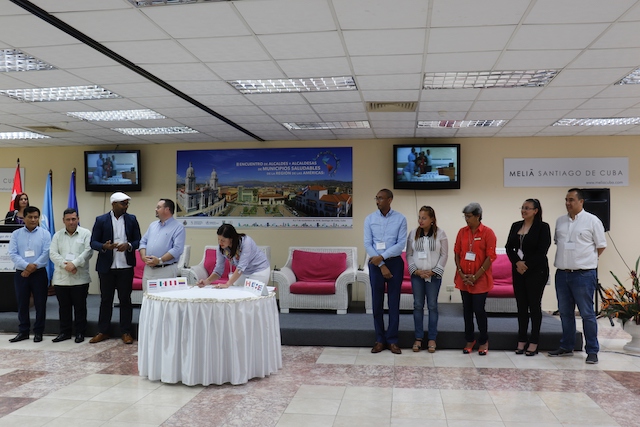 The Agreement of Santiago de Cuba marks two years since the adoption of the 2016 Declaration of Santiago at the Pre-Forum of Mayors in Santiago de Chile, in which mayors of municipalities of signatory countries pledged to prioritize strengthening the political, strategic and operational capacity of national networks for healthy municipalities in preparation for the Mayors’ Forum at the WHO 9th Global Conference on Health Promotion in Shanghai, China.

“The signed Agreement reaffirms the commitments of the Declaration of Santiago and further establishes municipalities, cities, and communities as platforms for achieving health and sustainable development,” said Dr. Gerry Eijkemans, Unit Chief, Health Promotion and Social Determinants (FPL/PS). “The Agreement calls upon the Region and the global community to encourage the advancement of the HMCC movement by strengthening networks, identifying strategic links between these networks and national association of municipalities, enhancing local capacities, exchanging best practices, integrating the social determinants of health into policy, and increasing political leadership for health among mayors.”

Local governments across the Region agree on the importance of implementing health promotion actions that addresses the social determinants of health as a key action for the achievement of the SDGs in their local work. These actions are also contributing to the renewal of the health promotion movement. 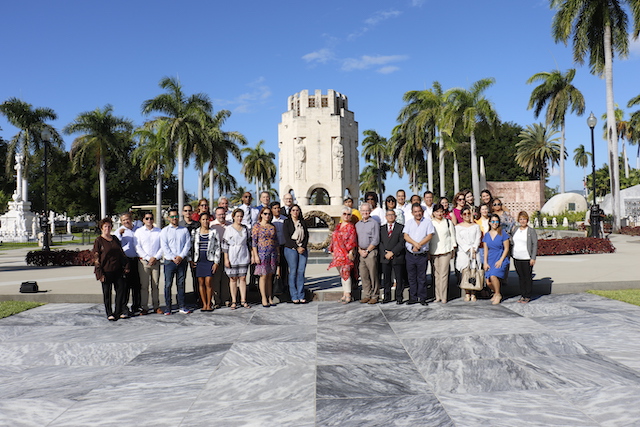 The meeting included presentations, plenaries, and working group sessions, during which mayors and representatives of ministries of health were able to share the various successes and challenges they have faced in implementing Healthy Municipalities programs.

“We made a special effort throughout the meeting to emphasize the defining role that cities and local leaders play in spearheading efforts to improve the daily conditions of urban life and reduce inequities in health,” said Eijkemans.

To keep the momentum going, a steering committee composed of mayors from the Region was established at the meeting’s conclusion. The committee is tasked with leading efforts to revive the HMCC movement, monitor its implementation in the Region, and report on progress. The first report of the Steering Committee is expected in March 2019.

The Second Meeting of Mayors was organized by PAHO, in collaboration with the Ministry of Public Health of Cuba and the REDLACPROMSA. Representatives of governments, WHO Collaborating Centers, municipal staff, , and academia participated.

The Healthy Municipalities, Cities, and Communities Movement in the Americas
The Region of the Americas has over twenty years of experience with the HMCC movement and has been a driving force for its global revitalization.

The adoption of the 2030 Agenda for Sustainable Development and its 17 Sustainable Development Goals (SDGs) offers an opportunity to revitalize the Movement of HMCCs in the Americas. The renewed focus on cities, communities, and municipalities has prompted their increased recognition as instrumental tools in shaping settings for health and achieving the SDGs in numerous global and regional agendas, including the Declaration of Santiago and the subsequent Consensus of Shanghai on Healthy Cities of the WHO 9th Global Conference on Health Promotion in 2016.

Across the Region, there are a growing number of initiatives, spearheaded by national and local policymakers, that incorporate key elements of the HMCC approach to achieve the SDGs through the establishment of sustainable public policies, creation multisectoral partnerships, participation from local governments and communities and enhancement of both new and existing HMCC networks.

PAHO has played a key role in supporting Member States in their efforts to promote healthy cities. Since the early 2000s, PAHO has developed recommendations, guides and toolkits as support for the mayors working towards the HMCC movement. PAHO teams working with city-level action or municipal level governance are encouraged to contact Dr. Gerry Eijkemans to join forces in this movement.