Hantavirus (HV) is an emerging zoonotic disease transmitted by rodents such as mice and rats. It is characterized by symptoms of fever, myalgia, and gastrointestinal complaints, followed by sudden onset of respiratory distress and hypotension. The agent responsible for the disease comes from the Hantavirus genus, from the Bunyaviridae family. It takes its name from the Hantaan river in South Korea, where it was originally discovered in 1978.

The most common clinical form of the disease in the region is Hantavirus Pulmonary Syndrome (HPS) which can lead to death. Symptoms of HPS may develop up to 42 days -and in some cases up to 56 days- after exposure , making it difficult to identify the exact source of infection.

The disease was initially detected in the Region in 1993, when an epidemic led to 27 cases in the southeast area of the United States. However, retro-analysis of the disease reveals cases from as early as 1959.

Cases of human hantavirus infection usually occur in rural areas (forests, fields, farms, etc.), where rodents hosting the virus may be found. However, transmission may also occur in urban areas. The virus is contracted through the inhalation of rodent droppings (urine and feces) and saliva. Only some types of rat and mouse can transmit the virus that causes HPS to people. 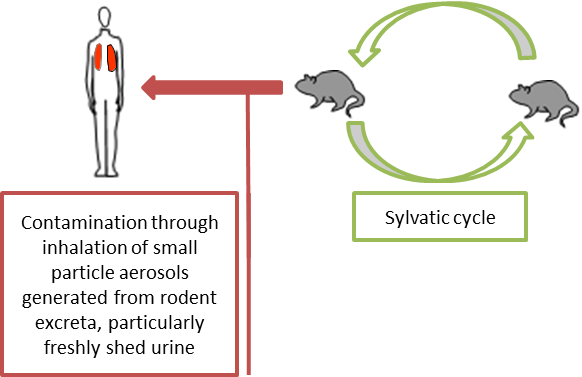 The chance of exposure to hantaviruses is greatest when individuals work, play, or live in enclosed spaces where there is an active rodent infestation. Human infection does not appear to be limited to a particular age, race, ethnic group, or gender.

It is unknown if direct transmission can occur when larger particles come into contact with ocular, nasal, or oropharyngeal mucous membranes. However, small skin breaks and rodent bites are probably effective but uncommon routes of human infection.

Ticks, fleas, mosquitoes, and other biting arthropods do not have a role in the transmission of hantaviruses. Although cats and dogs are not known to host hantaviruses, these domestic animals may bring infected rodents into contact with humans

The incubation period varies from a few days to six weeks after exposure. Infected individuals may experience headaches, dizziness, chills, fever and myalgia. They may also experience gastrointestinal (GI) symptoms including nausea, vomiting, abdominal pains, and diarrhoea, followed by sudden onset of respiratory distress and hypotension.

Early identification and timely medical care improves clinical outcome. Care during the initial stages of the illness should include antipyretics and analgesics as needed. In some situations, patients should receive broad-spectrum antibiotics while confirming the etiologic agent.

Given the rapid progression of HPS, clinical management should focus on the patient's haemodynamic monitoring, fluid management, and ventilation support. Severe cases should be immediately transferred to intensive care units (ICUs).

Hantavirus infections may resemble other diseases such as leptospirosis, dengue fever, chikungunya and even influenza in the early stage. Including this disease in the differential diagnosis concerning febrile syndromes may result in a timelier recognition and improved case management.

Fatality rates may significantly decrease through early recognition and decentralization of laboratories allowing for early detection and better case management.

HPS occurrence can be prevented by reducing people’s contact with rodents and their excrement, as well as well as through hygienic practices prevent rodent infestations in the home, workplace and recreation areas. There is currently no vaccine against hantavirus in the Americas.

Preventive measures should be employed against occupational and eco-tourism related hazards. While most usual tourism activities pose little or no risk of exposing travelers to rodents or their excreta, people who engage in outdoor activities such as camping or hiking should take precautions to reduce possible exposure to potentially infectious materials. WHO recommends the implementation of integrated environmental management, with the goal of reducing rodent populations.

Rodent and infection control are the primary measures to be employed to reduce personal risk. Specific recommendations include reducing their food sources and sites where rodents can nest, both inside and outside the home; recommendations for eliminating rodents from the home and preventing them from entering; precautions to avoid hantavirus infection while cleaning areas contaminated by rodents; prophylactic measures for people with occupational exposure to wild rodents; and precautions to protect campers and hikers.

The distribution of hantavirus solely depends on the ecology of its reservoir. Therefore, if the distribution of virus-carrying rodents is known, the emergence of human cases may be predicted. Approximately 40 variants have been identified in the continent, each associated to a specific reservoir.

Although not all countries have reported human cases, this may have been underestimated due to its resemblance to other febrile illnesses. Furthermore, field studies on rodents have shown that hantaviruses are circulating in countries where the disease is not reportable and that are in proximity to endemic territories

Every year, available data shows that approximately 300 cases are reported in the Americas. However, this disease is most likely underestimated due to limited surveillance. From 1993 to 2016, more than 6300 cases were registered in countries of the region where the disease is under surveillance. These include various types of hantavirus of diverse virulence and clinical specifications.

It is worth noting that whilst hantaviruses may circulate throughout the region, this virus is not a reportable disease in all PAHO member countries. This poses a challenge when assessing the burden and extent of this zoonosis and hinders the development of potential interventions to reduce its incidence.

Number of hantavirus cases reported in the Americas until 2016

Confirmed: A suspected case that is laboratory confirmed.