Moving towards universal health with integrated care services in Belize

Ashanti Gill arrived at the Matron Roberts clinic by bus one morning. Her eight-month pregnancy and two-year old son made walking there difficult, but little Erik had been suffering with a cough and fever the night before and needed a check-up. 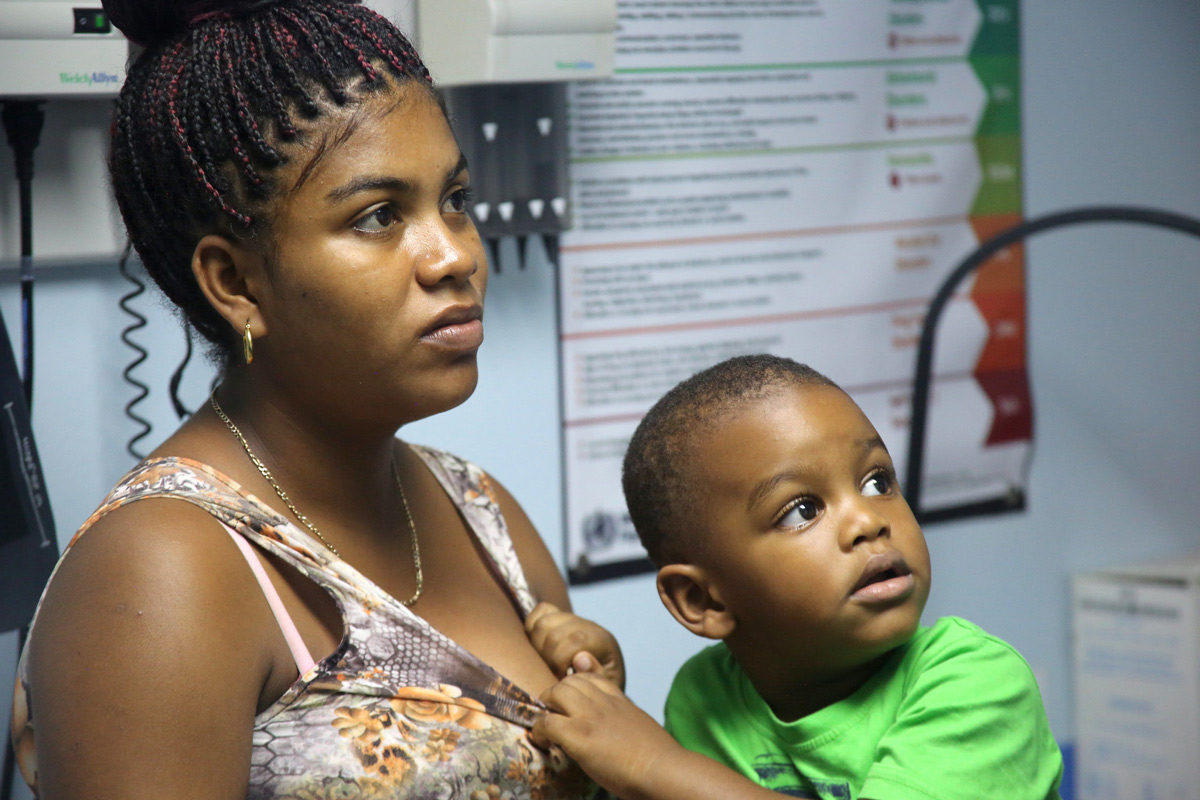 “He wasn’t feeling well all night and barely slept,” said Ashanti. The 25-year old mother said that she prefers this clinic because “the others are smaller. They have less staff and the waiting times are longer.”

Integrated health care for women and children is one of the main focuses of the Matron Roberts Polyclinic in Belize. This primary care clinic provides comprehensive services to 24,000 people in the southern part of Belize City, an area with one of the highest rates of unemployment and gun-violence in the small Central American country.

That day Ashanti was visiting the outpatient clinic but previously she had been referred to the prenatal care department for her next appointment and follow-up. Integrated care lies at the very heart of Matron Roberts with its emphasis on people- and not illness-centered services. The polyclinic offers a wide-range of integrated services including laboratory blood tests, nutritional advice, family planning, breastfeeding counseling, cervical cancer screening and pharmacy, all in the same place.

“The idea is to offer as many services as possible in the least number of visits,” said Dr. Karl Jones, Medical Coordinator at Matron Roberts. “If patients have to go elsewhere for an analysis, the likelihood is that they just won’t do it. This is why it is vital that we offer them here,” he added. “Many patients leave the polyclinic after receiving a consultation, laboratory results and medicines. This enables us to better manage cases.”

This is just one example of integrated primary care services that are developing right across Belize. The services improve access to quality care, ensure a continuum of care and use resources more efficiently. It is part of a strategy to achieve universal access to health and universal health coverage.

Following her appointment and before going to the pharmacy to pick up the medication prescribed by the doctor Ashanti said that for her this is, “the best clinic in Belize. It is clean, the staff is friendly, the doctors are friendly.” Ashanti is due to give birth at the Karl Heusner Memorial Hospital (KHMH), the only specialized referral hospital in the country, and another example of an integrated health network.

In 2001, Belize put in place a National Health Insurance (NHI) scheme as a financing and purchasing mechanism of primary care level health services, from both public and private providers. It is currently financed with government revenues through the Ministry of Health (MoH) and its governance falls under the Social Security Board (SSB).

The scope of the scheme was limited to the poorest regions in Belize city, progressively extended to the southern region and some districts in the north of Belize. After 17 years in place the scheme is still considered a pilot and is pending to be extended to a cross-national level. Since it was launched, coverage has extended and many achievements can be identified mostly related to the introduction of doctor-based groups practice for primary clinical care and higher staff-to-patient ratios. The concept of payment is linked to performance, based on pre-established “key performance indicators” and well defined standards and protocols of treatment, including non-communicable diseases. Satisfaction surveys conducted regularly show raising patient satisfaction among the covered population.

However, challenges remain and are mostly related to the partial NHI implementation restricted to some geographical areas, which has created inequities and promoted fragmentation at the health facilities level hindering continuity of care and creating a dual health services provision and purchasing of primary care health services. 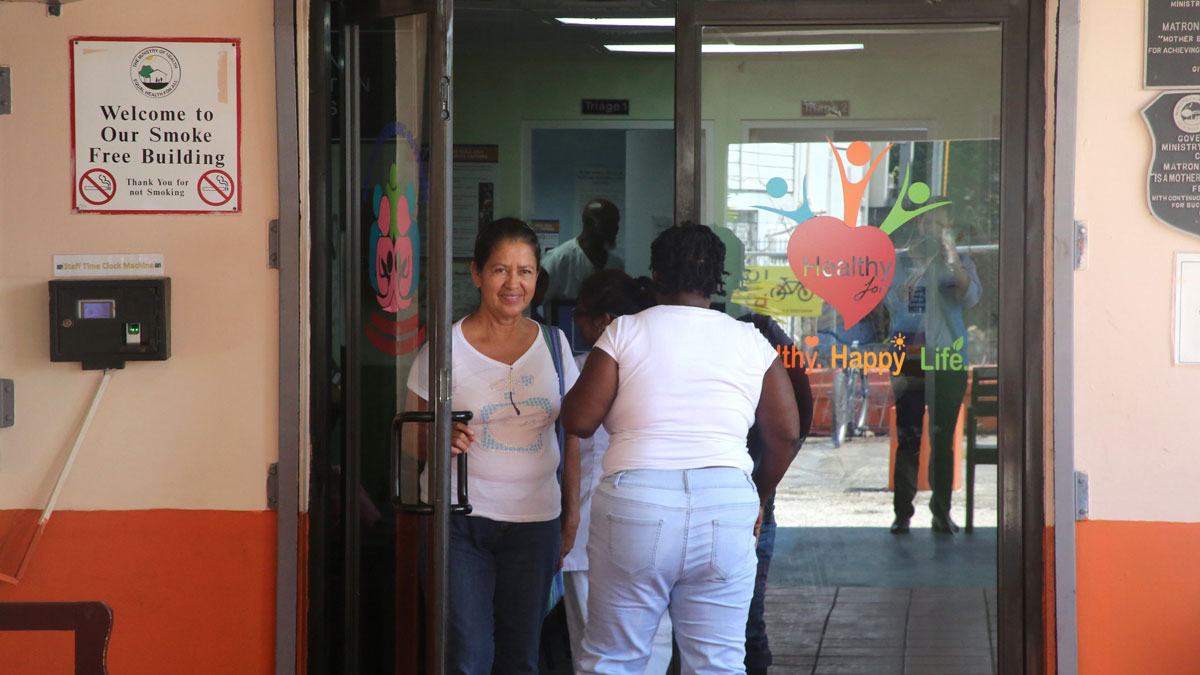 The Matron Roberts Polyclinic is run by the Government of Belize and serves patients who are covered by two insurance schemes; one from the Ministry of Health and the other the National Health Insurance (NHI) scheme. At the polyclinic, the same health personnel provide services to patients covered by both types of insurance. The coexistence of both systems within the same health facility presents challenges in terms of administrative efficiency, but also has advantages. This includes defined protocols and a transparent, results-based system that incentivizes efficiency and has a positive impact on quality of care. Matron Roberts has been recognized for its work with an NHI public provider excellence award.

Alexy Rosado has been the Manager at the polyclinic for more than seven years. Since assuming the role, she has worked to ensure improvements in the quality of care, including in basic infrastructure (for example, new flooring) and the implementation of incentives for staff to improve their attitudes towards both patients and the working environment. According to Rosado, one of the remaining challenges is to reduce wait times.

“Doctors see between 150 and 200 patients per day,” said Rosado. “We want to improve wait times and provide a faster triage. This is part of our strategic plan,” she added.

Matron Roberts employs 47 professionals and health personnel. According to Rosado this number, “is never enough to cover the health needs of the population, which is why we also do home visits and referrals.”

In order to address the country-wide issue of limited availability of health personnel, which is also a challenge experienced all over the world, the Ministry of Health recently launched its first Strategic Plan for Human Resources for Health, prepared with support from PAHO/WHO.

Providing integrated health services is a strategy promoted by the Pan American Health Organization (PAHO), regional office for the Americas of the World Health Organization (WHO), in Belize to achieve universal health with an emphasis on primary care. These services improve access to quality health care, the efficient use of resources, and ensure continuity of care through better coordination between the different levels of care, from primary care in the community to more specialized care.

"The Government of Belize has worked with PAHO/WHO for years to strengthen policy, legislation, hospital administration, health financing, human resource planning and development, integrated networks, and the first level of care to build a strong health system for UHC."

In the late 1990s, Belize initiated a health sector reform program with the aim of modernizing the country’s healthcare system. In 2001, the country launched the National Health Insurance (NHI) scheme and has been working since then, with PAHO/WHO support, to expand access and improve quality of care.

“The organization,” she added, “is also an implementing partner in a five-year Ministry of Health and European Union project that will allocate almost seven million Euros to strengthening the country’s health system.”

This initiative focuses on evaluating health reform and reorganizing the health system; the adoption of “smart” (green and disaster-safe) interventions in community and regional healthcare facilities; improvements in service provision, the model of care and the Health Information System; and the expansion of the national health insurance scheme, among other aspects.  By taking this path, the country is seeking to expand access and health coverage to all people, leaving no one behind.