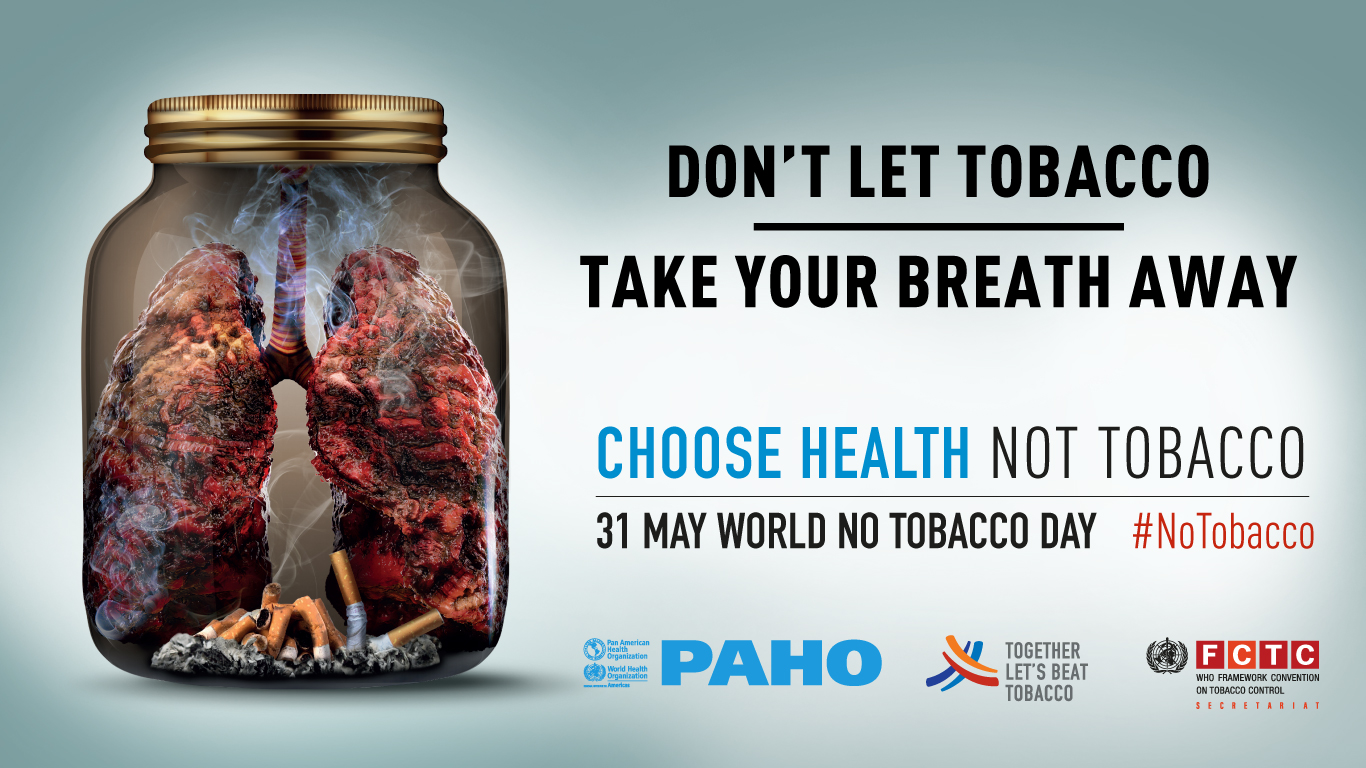 Every year, on 31 May, the Pan American Health Organization (PAHO) joins the global community to celebrate World No Tobacco Day. The annual campaign is an opportunity to raise awareness on the harmful and deadly effects of tobacco use and second -hand smoke exposure, and discourage the use of tobacco in any form. The focus of World No Tobacco Day 2019 is on "tobacco and lung health." Find below information about the activities organized by PAHO and the communication materials that you can download and share.

The campaign will increase awareness on: the negative impact that tobacco has on people’s lung health, from cancer to chronic respiratory disease, the fundamental role lungs play for the health and well-being of all people. The campaign also serves as a call to action, advocating for effective policies to reduce tobacco consumption and engaging stakeholders across multiple sectors in the fight for tobacco control.

The campaign will increase awareness on the:

– the negative impact that tobacco has on people’s lung health, from cancer to chronic respiratory disease,

– the fundamental role lungs play for the health and well-being of all people.

The campaign also serves as a call to action, advocating for effective policies to reduce tobacco consumption and engaging stakeholders across multiple sectors in the fight for tobacco control.

About World No Tobacco Day campaign

The most effective measure to improve lung health is to reduce tobacco use and second-hand smoke exposure. But knowledge among large sections of the general public, and particularly among smokers, on the implications for the health of people’s lungs from tobacco smoking and second-hand smoke exposure is low in some countries. Despite strong evidence of the harms of tobacco on lung health, the potential of tobacco control for improving lung health remains underestimated.

The World No Tobacco Day 2019 campaign will raise awareness on the:

– awareness on the particular dangers of tobacco smoking to lung health;

– magnitude of death and illness globally from lung diseases caused by tobacco, including chronic respiratory diseases and lung cancer;

– emerging evidence on the link between tobacco smoking and tuberculosis deaths;

– implications of second-hand exposure for lung health of people across age groups;

– importance of lung health to achieving overall health and well-being;

– feasible actions and measures that key audiences, including the public and governments, can take to reduce the risks to lung health posed by tobacco.

The cross-cutting theme of tobacco and lung health has implications for other global processes, such as international efforts to control noncommunicable diseases (NCDs), TB and air pollution for promoting health. It serves as an opportunity to engage stakeholders across sectors and empower countries to strengthen the implementation of the proven MPOWER tobacco control measures contained in the WHO Framework Convention for Tobacco Control (WHO FCTC).

Lung health is not achieved merely through the absence of disease, and tobacco smoke has major implications for the lung health of smokers and non-smokers globally.

In order to achieve the Sustainable Development Goal (SDG) target of a one-third reduction in NCD premature mortality by 2030, tobacco control must be a priority for governments and communities worldwide. Currently, the world is not on track to meeting this target.

Countries should respond to the tobacco epidemic through full implementation of the WHO FCTC and by adopting the MPOWER measures at the highest level of achievement, which involves developing, implementing, and enforcing the most effective tobacco control policies aimed at reducing the demand for tobacco.

Parents and other members of the community should also take measures to promote their own health, and that of their children, by protecting them from the harms caused by tobacco.

World No Tobacco Day 2019 will focus on the multiple ways that exposure to tobacco affects the health of people’s lungs worldwide.

Chronic respiratory disease. Tobacco smoking is the leading cause of chronic obstructive pulmonary disease (COPD), a condition where the build-up of pus-filled mucus in the lungs results in a painful cough and agonising breathing difficulties. The risk of developing COPD is particularly high among individuals who start smoking at a young age, as tobacco smoke significantly slows lung development. Tobacco also exacerbates asthma, which restricts activity and contributes to disability. Early smoking cessation is the most effective treatment for slowing the progression of COPD and improving asthma symptoms.

Tuberculosis. Tuberculosis (TB) damages the lungs and reduces lung function, which is further exacerbated by tobacco smoking. The chemical components of tobacco smoke can trigger latent infections of TB, which around a quarter of all people are infected with. Active TB, compounded by the damaging lung health effects of tobacco smoking, substantially increases risk of disability and death from respiratory failure.

Air pollution. Tobacco smoke is a very dangerous form of indoor air pollution: it contains over 7 000 chemicals, 69 of which are known to cause cancer. Though smoke may be invisible and odourless, it can linger in the air for up to five hours, putting those exposed at risk of lung cancer, chronic respiratory diseases, and reduced lung function.

Brochure: Don´t let tobacco to take your breath away 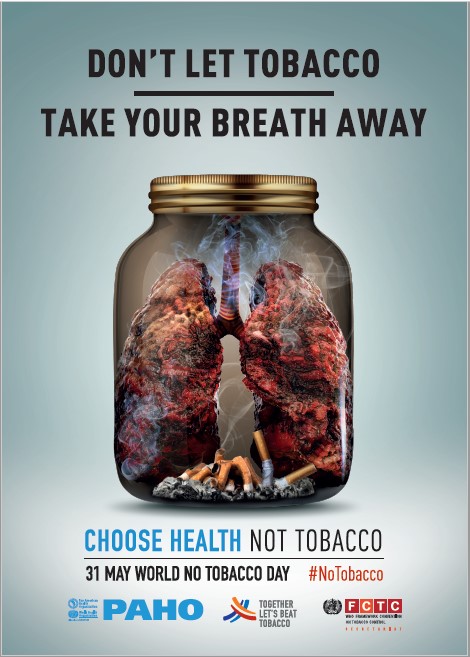 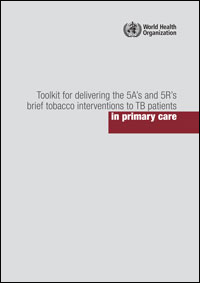 Fact-sheet: Tobacco and Lung Health in the Americas 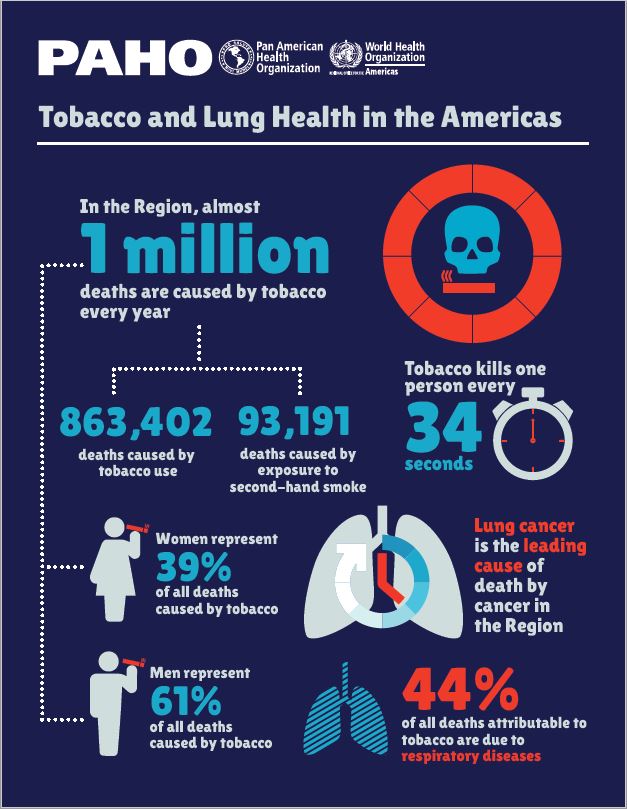 A guide for tuberculosis patients to quit smoking 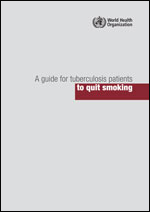 World No Tobacco Day (WHO)

WHO Framework Convention on Tobacco Control (WHO FCTC)

Wednesday, 29 May 2019 - Webinar: Tobacco Cessation and Patients with Tuberculosis 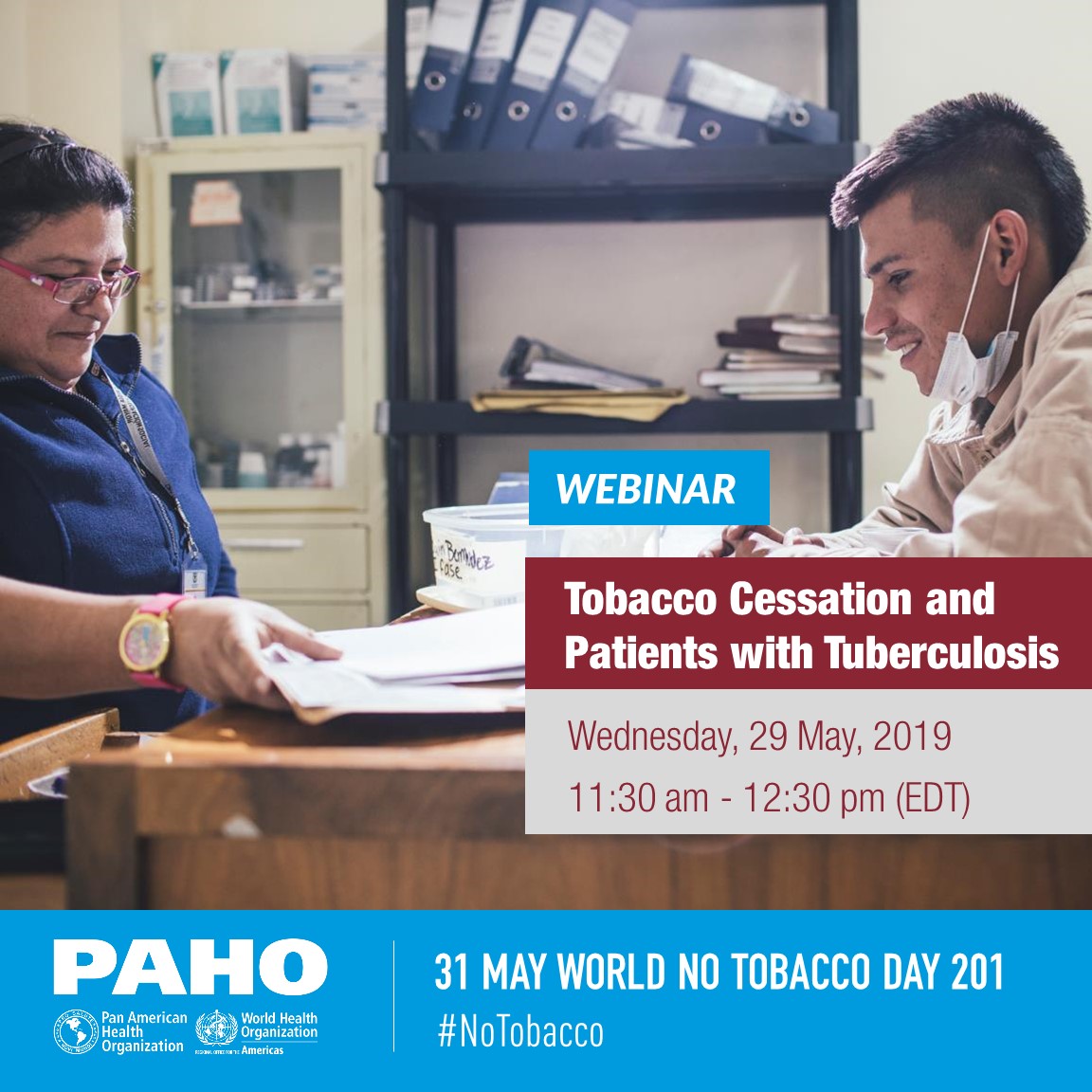 Check here for time in your zone. Available in English and Spanish.

Via: WHO campaign site

This session has been rescheduled to 2.00 pm EDT due to technical issues. 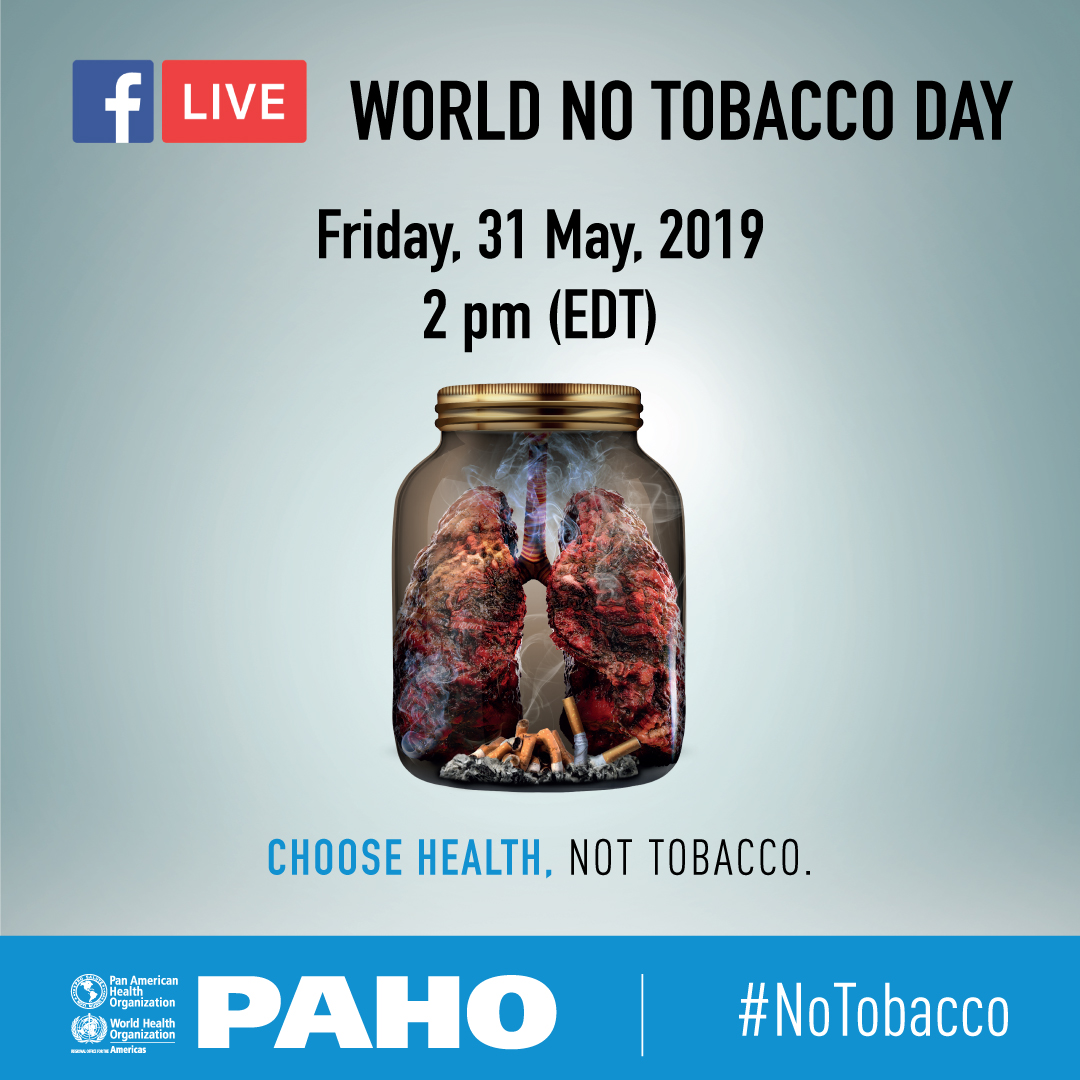 What Takes Your Breath Away - Esperanza´s Story" 2019

Social media campaign: What should take your breath away? #NeverTobacco 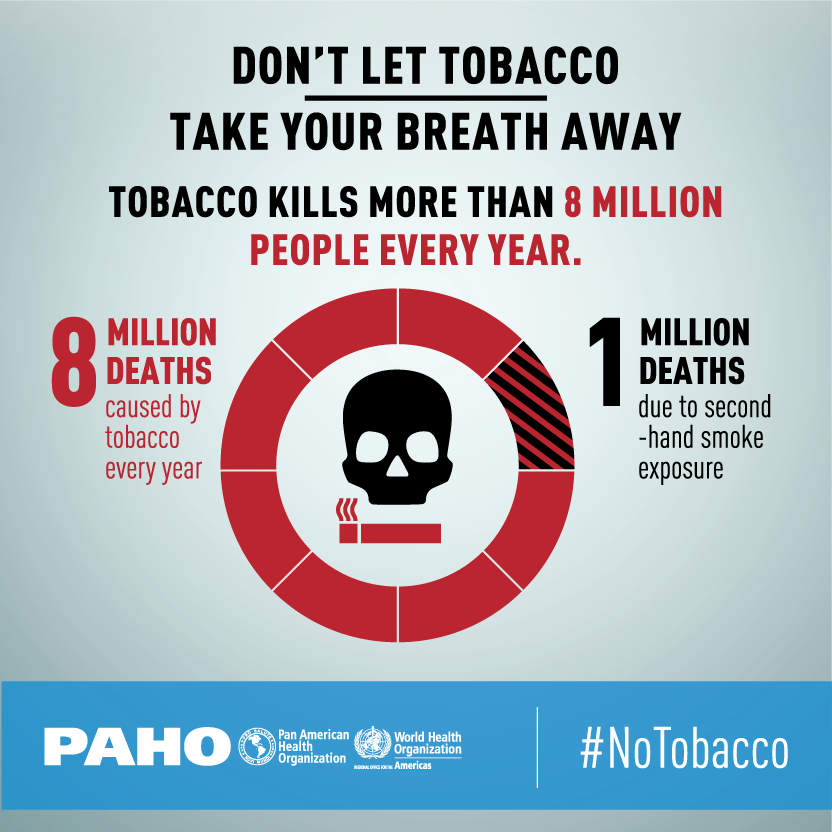 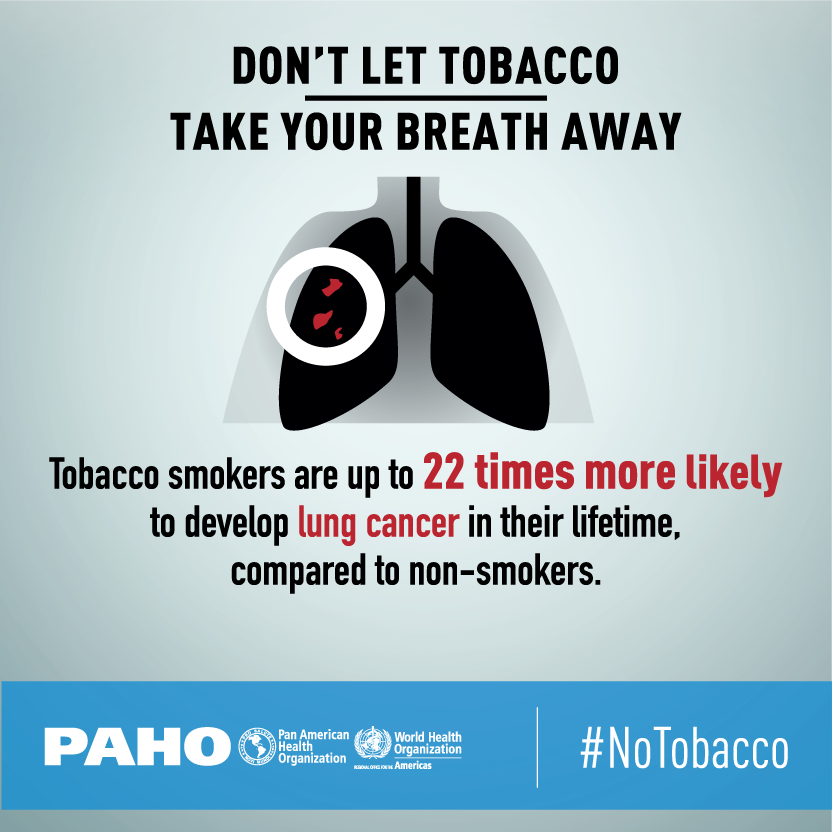 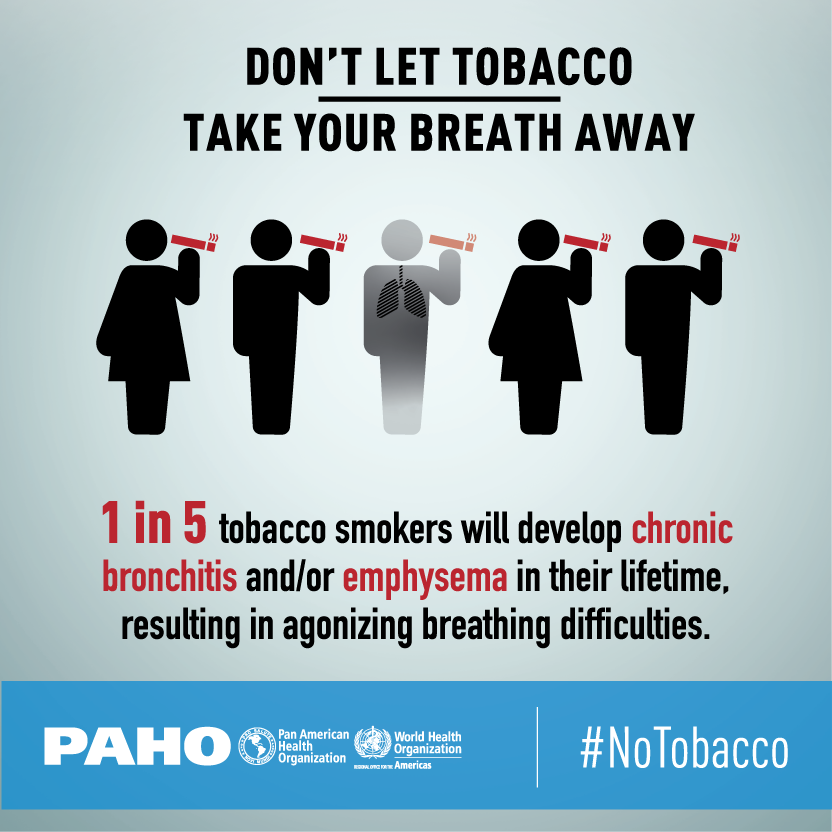 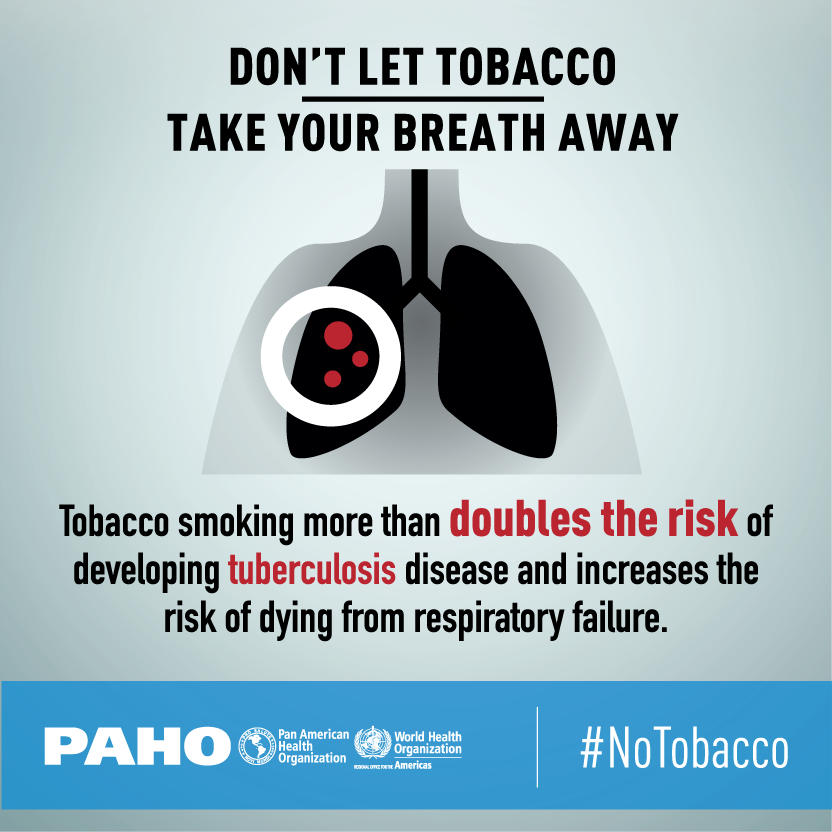 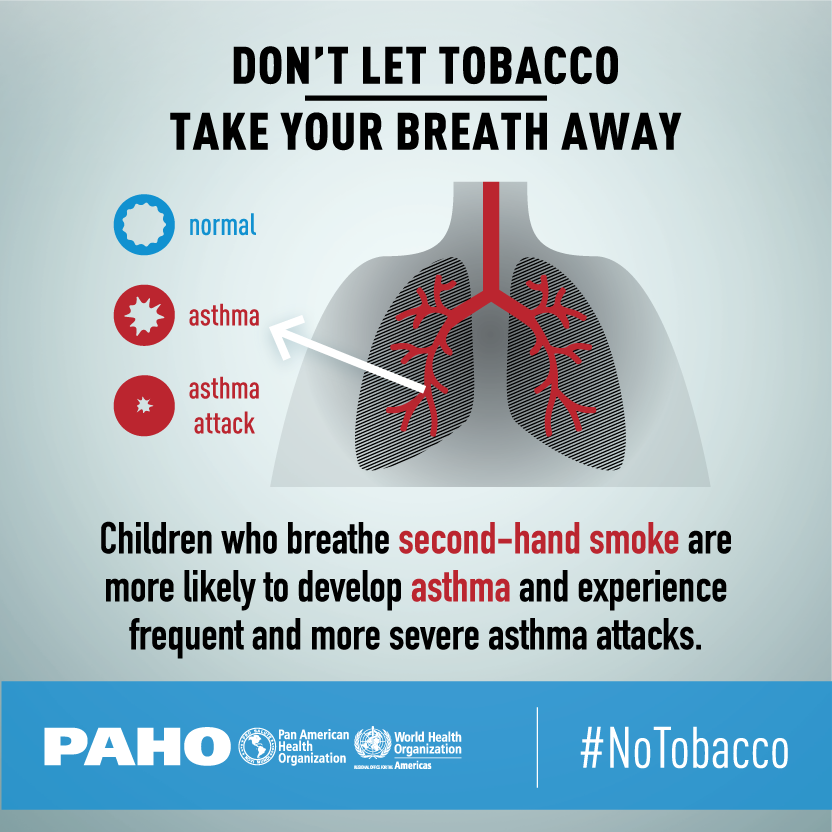 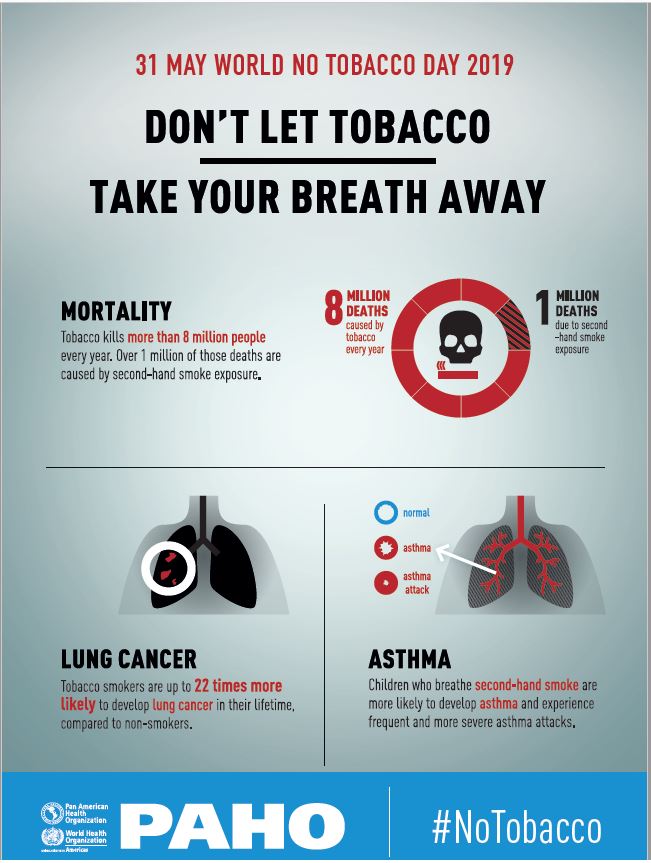 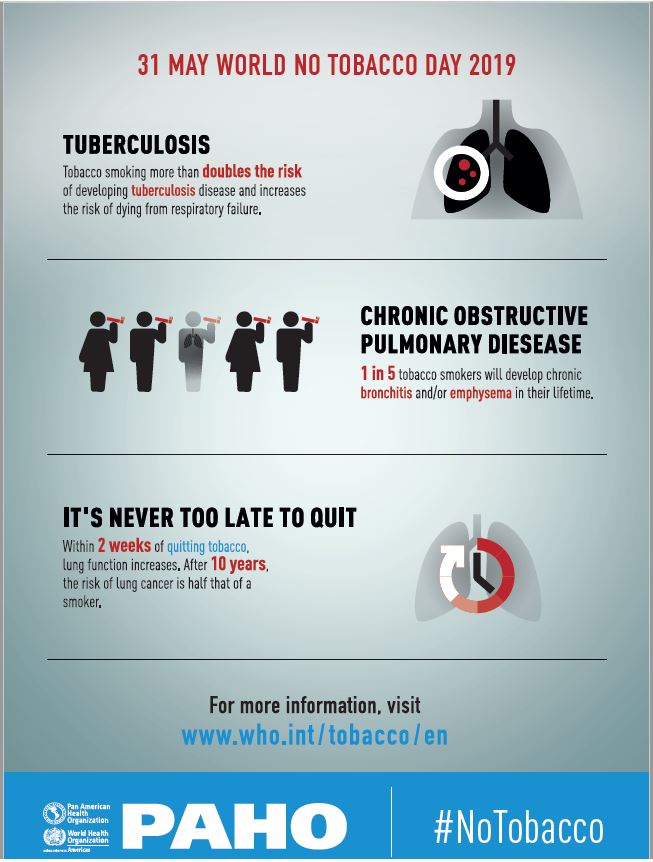