Argentina certified malaria-free by WHO

Geneva, 22 May 2019– Algeria and Argentina have been officially recognized by WHO as malaria-free. The certification is granted when a country proves that it has interrupted indigenous transmission of the disease for at least 3 consecutive years.

Contracted through the bite of an infected mosquito, malaria remains one of the world’s leading killers, with an estimated 219 million cases and over 400 000 malaria-related deaths in 2017. Approximately 60% of fatalities are among children aged under 5 years.

Algeria and Argentina reported their last cases of indigenous malaria in 2013 and 2010 respectively.

For both Algeria and Argentina, malaria has a history that spans hundreds of years, and the battle against the disease has been hard-fought. Over the last decade, improved surveillance allowed for every last case of malaria to be rapidly identified and treated. Importantly, both countries provided free diagnosis and treatment within their borders, ensuring no one was left behind in getting the services they needed to prevent, detect and cure the disease.

“Algeria and Argentina have eliminated malaria thanks to the unwavering commitment and perseverance of the people and leaders of both countries,” said Dr Tedros Adhanom Ghebreyesus, WHO Director-General. “Their success serves as a model for other countries working to end this disease once and for all.”

Stamping out malaria in Algeria

French physician Dr Charles Louis Alphonse Laveran discovered the malaria parasite in Algeria in 1880. By the 1960s, malaria had become the country’s primary health challenge, with an estimated 80 000 cases reported each year. 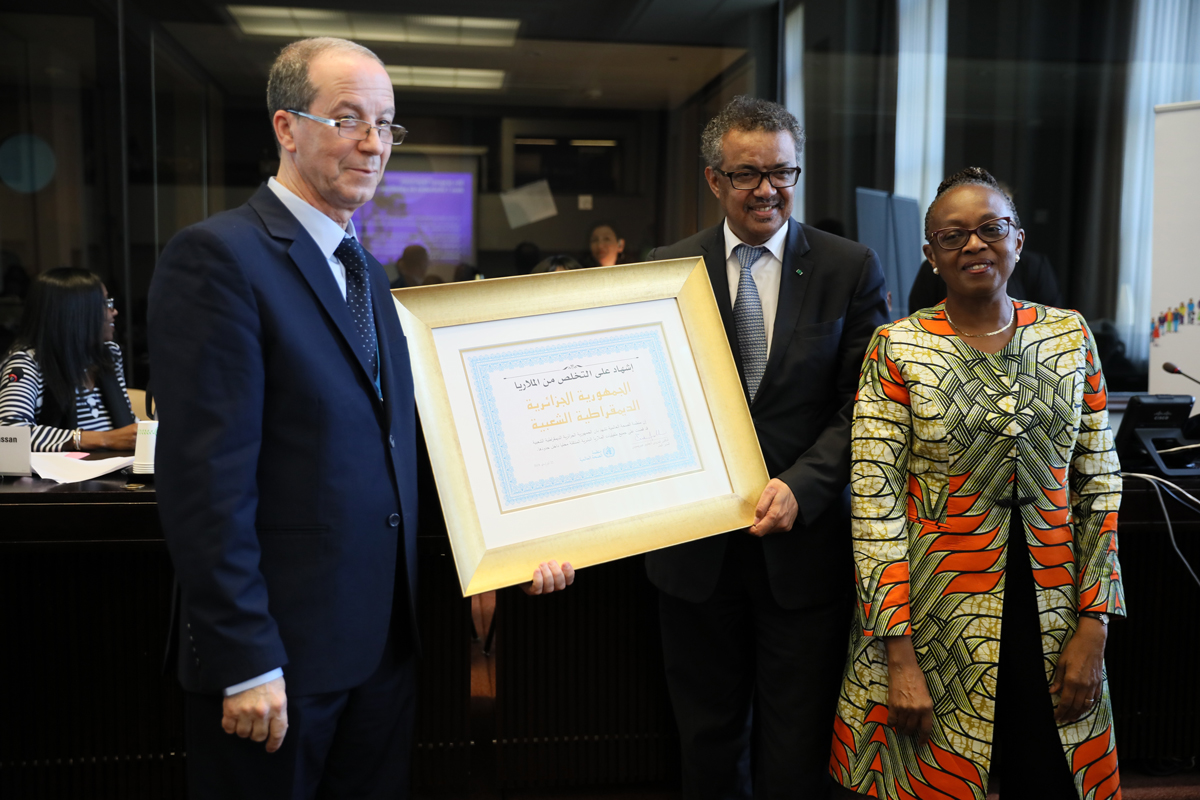 Algeria’s subsequent success in beating the disease can be attributed primarily to a well-trained health workforce, the provision of malaria diagnosis and treatment through universal health care, and a rapid response to disease outbreaks. Together, these factors enabled the country to reach – and maintain – zero malaria cases.

“Algeria is where the malaria parasite was first discovered in humans almost a century and a half ago, and that was a significant milestone in responding to the disease,” said Dr Matshidiso Moeti WHO Regional Director for Africa. “Now Algeria has shown the rest of Africa that malaria can be beaten through country leadership, bold action, sound investment and science. The rest of the continent can learn from this experience.”

In the 1970s, Argentina set out to eliminate malaria. Key elements of its approach included training health workers to spray homes with insecticides, diagnosing the disease through microscopy, and effectively responding to cases in the community.

Cross-border collaboration was also critical. Between 2000 and 2011, Argentina worked closely with the Government of Bolivia to spray more than 22 000 homes in border areas and conduct widespread malaria testing.

“Argentina reported the last indigenous case in 2010 and has demonstrated the commitment, the capacity within its health, laboratory and surveillance systems, and the necessary financing to prevent the re-establishment of malaria within the country”, said Dr Carissa F. Etienne, Director of the Pan American Health Organization, WHO regional office for the Americas “I am sure that Argentina will serve as an inspiration and as an example for other countries of the Americas to achieve the elimination of malaria in the coming years.”

The certificates were presented by the WHO Director-General to representatives from Algeria and Argentina on the sidelines of the 72ndsession of the World Health Assembly.

WHO grants a certification of malaria elimination when a country has proven, beyond reasonable doubt, that the chain of indigenous transmission has been interrupted nationwide for at least the previous three consecutive years. In addition, a national surveillance system capable of rapidly detecting and responding to any malaria cases must be operational, together with an effective programme to prevent re-establishment of the disease.

Globally, a total of 38 countries and territories have now been declared malaria-free
Details on the WHO malaria elimination certification process can be found by selecting this link

Fadela Chaib
WHO Headquarters
This email address is being protected from spambots. You need JavaScript enabled to view it.

Sakuya Oka
WHO Regional Office for Africa
This email address is being protected from spambots. You need JavaScript enabled to view it.

Leticia Linn
WHO Regional Office for the Americas
This email address is being protected from spambots. You need JavaScript enabled to view it.