Immunization Newsletter celebrates 40 years and is now available in Portuguese! 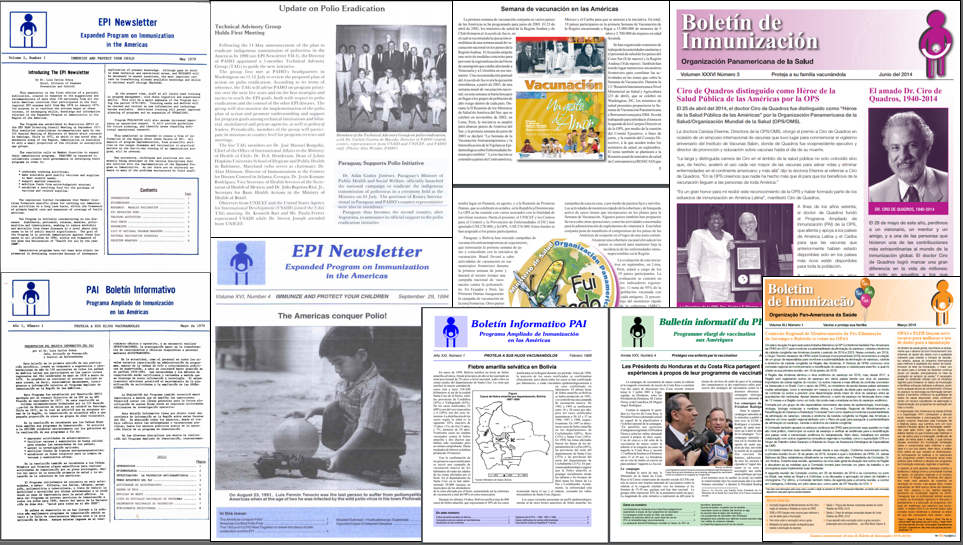 The late Luis Carlos Ochoa, chief of PAHO’s Division of Disease Prevention and Control in 1979, introduced the then-named “EPI Newsletter” as a way for immunization nationals from the Region of the Americas to exchange experiences, knowledge and information. This continues to be the Newsletter’s objective, with additional attention paid to technical excellence, information on all aspects of immunization program implementation, and any noteworthy events and developments.

Over the last 40 years, the EPI Newsletter has changed its name, appearance, format and added languages for wider access and use. The title was changed to “Immunization Newsletter” in June 2005, and changes to the Newsletter’s design were reflected in this issue and again in April 2013. French was added to the lineup of available languages in 2001, followed by Portuguese in 2019. Initially, the Newsletter was only physically published and mailed. Since email arrived at PAHO circa 1995 (anyone remember cc:Mail?), it has been emailed out as well.

As the EPI was created in 1977, the Newsletter has borne witness to key developments over these last 40 years. There have been many important events documented by the Newsletter, including the Uruguayan government’s initial approval of legislation requiring immunization against vaccine-preventable diseases in the June 1982 issue, the first meeting of PAHO’s Technical Advisory Group (TAG) on Vaccine-preventable Diseases in August 1985, the certification of the Americas being polio free in September 1994, the first Vaccination Week in the Americas in April 2003, and the declaration of rubella elimination in the Americas in June 2015, among others. In September 2015, the Newsletter´s editorial team started a column titled “What I Have Learned…” that provides immunization professionals with the platform to share their meaningful experiences and moments, as well as lessons learned along the way.

The June 2014 Newsletter was dedicated to Ciro de Quadros, following his passing in May of that year. This issue featured memorials from his former friends and colleagues, important moments like Ciro being named 2014’s Public Health Hero of the Americas, highlights from past interviews he did and an excerpt from an article Ciro wrote on smallpox eradication in Ethiopia in order to honor his important role in not only the EPI, but also for the Immunization Newsletter. Were it not for him, this important source on immunization in the Region would not be blowing out 40 candles.

Editorial staff over the years

The editorial team is so grateful to all who have contributed articles to the Newsletter over the years - you are the reason the editors have been able to consistently put out issues for 40 years, and you have greatly contributed to the legacy that is the Immunization Newsletter. The Newsletter is, in fact, for you and by you.

For the future, we hope that the Newsletter continues to share experiences from countries, document EPI developments in the Region, and provide a platform for those who have something they want to say on the topic of immunization. We hope that it continues to gain readers and strongly engages its current readers for many, many years to come.

If you would like to subscribe to the Immunization Newsletter, just send an email to This email address is being protected from spambots. You need JavaScript enabled to view it.