Washington, D.C., 30 September 2019 (PAHO/WHO) -- In the past 25 years, the population of the Americas has aged, while inequalities in health have increased. These changes will make achieving universal health coverage and universal access to health care more of a challenge in the Region, according to the Pan American Health Organization (PAHO). 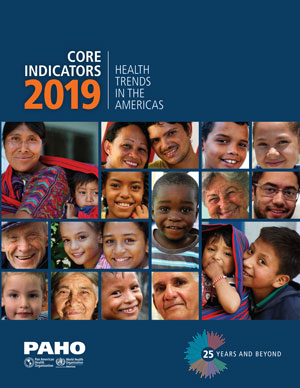 The 2019 edition of PAHO’s Core Indicators, Health Trends in the Americas, published today, shows that the number of people aged 65 and over in the Americas has nearly doubled since 1995, from 62 million to 116 million in 2019.  The aging population is due to both lower birth rates and people living longer. The median age of people living in the hemisphere is 33.5 years, an increase of 6.5 years since 1995. This aging population in large part explains why noncommunicable diseases (NCDs) now account for 81% of mortality in the Region.

Other important trends covered in the 2019 edition include overweight/obesity rates, which in 1995 were under 50% for both men and women, but by 2016 had risen to above 60% for both sexes. Regionwide, malaria incidence has decreased over the last two decades, although some countries have recently seen increases from local outbreaks and epidemics. The statistics also show that while new infection rates for HIV decreased consistently in the Americas until 2004, the declines have stagnated since then.

The 2019 edition features visual presentations of data on selected core health indicators to illustrate notable trends over the past 25 years. It also includes traditional data tables on 82 core indicators for the countries, territories, and subregions of the Americas, grouped into the following categories: demographic-socioeconomic, health status, risk factors, service coverage, and health systems.