Washington, D.C., 28 September 2009 (PAHO) — Dr. Jon Kim Andrus, a public health expert with 25 years of experience of working in the field of vaccines, immunization, and primary care in developing countries, has been named deputy director of the Pan American Health Organization, Regional Office for the Americas of the World Health Organization (PAHO/WHO). 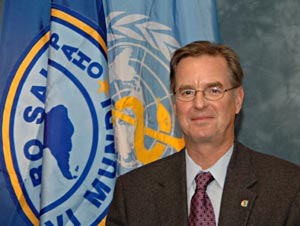 Jon K. Andrus, PAHO Deputy Director - Photo &copy; S.Mey, PAHO/WHO
Dr. Andrus has been serving as lead senior technical advisor for PAHO's immunization program, where he has been a forceful advocate for spreading the benefits of vaccination. He is also the director of the George Washington University's Global Health MPH Program and holds adjunct faculty appointments at the University of California at San Francisco School of Medicine and the Johns Hopkins Bloomberg School of Public Health.

Earlier in his career, Dr. Andrus worked in key positions on polio eradication in Latin America, South-East Asia and Africa. Among other posts, he served as a medical epidemiologist at the Global Immunization Division at the Centers for Disease Control and Prevention (CDC) in Atlanta and, on assignment by the CDC, as regional advisor for polio eradication and chief of vaccines and biologicals for the South-East Asia Regional Office of WHO.

Dr. Andrus, a U.S. citizen, has published numerous scientific articles in the fields of vaccines, immunization, and accelerated control of vaccine-preventable diseases and has won several prestigious awards for his service to public health.

In 2007, he received the Philip R. Horne Award for sustained worldwide leadership in the global and regional immunization initiatives to eradicate polio and eliminate measles and rubella, and for the control of other vaccine-preventable diseases.

Dr. Andrus joined PAHO in 2003 as chief of the Immunization Unit and became lead technical advisor in 2006. During this time, he provided technical oversight for policy development for vaccines and immunization to PAHO member countries. He also spearheaded ProVac, an effort to enhance countries' capacities to use evidence in decision-making on vaccine use, funded by the Bill & Melinda Gates Foundation through the Pan American Health and Education Foundation (PAHEF).

Dr. Andrus is a member of the Steering Committee for Cervical Cancer Action: A Global Coalition to Stop Cervical Cancer and a member of the Technical Advisory Group of the HPV Vaccine Project of PATH, as well as a scientific advisor for the Johns Hopkins Pneumococcal Vaccines Accelerated Development and Introduction Plan (PneumoADIP).

The Pan American Health Organization, founded in 1902, works with all the countries of the Americas to improve the health and quality of life of their peoples. It serves as the Regional Office of the World Health Organization (WHO).