Has endemic rubella virus transmission been interrupted in Argentina and Brazil? 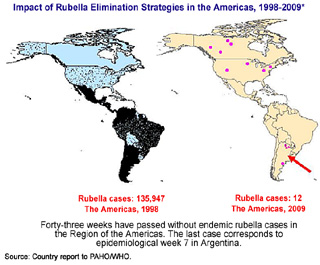 Results from the active case search for suspect rubella and congenital rubella syndrome (CRS) cases conducted in Argentina indicate that the last case of rubella corresponds to epidemiological week 7, signifying that 10 months have passed since a rubella case has been confirmed. In 2009, Argentina has reported 3 CRS cases; the date of birth of the last CRS case was 6 July 2009.

Argentine health authorities continue monitoring virus excretion from the three CRS cases identified in 2009 and with the processing of laboratory samples from patients suspected of dengue but whose results were negative in order to diagnose rubella, given that the dengue outbreak in the country at the beginning of this year could have masked some rubella cases. In addition, active searches in epidemiologically silent municipalities will continue. The results of these intensive surveillance actions will be presented in April 2010 before a committee of national and international experts.

Brazil also started to investigate confirmed CRS cases and congenital rubella infection (CRI) cases reported in the last three years (2007-2009).  According to the available data from this period, 30 CRI cases and 55 CRS cases were reported; the date of birth of the last reported CRS case is 12 September 2009. A multidisciplinary working group has been established to lead the additional investigation of these cases that will also include suspected CRS and CRI cases with inconclusive final classification. Results from the investigation will be presented in April 2010.

Rubella elimination in the Americas is defined as the interruption of endemic rubella virus transmission in all the countries of the Americas for a period greater than or equal to 12 months without the occurrence of CRS cases associated with endemic transmission.

During the last meeting of the Technical Advisory Group on Vaccine-preventable Diseases (TAG) in 2009, it was recommended that the countries that have reported the last rubella and CRS cases should implement activities, such as active case searches and monitoring of virus excretion of identified CRS cases, in order to document and verify the interruption of endemic virus transmission.

From Rubella Watch, an electronic publication disseminated bimonthly by the Immunization Project of the Pan American Health Organization (PAHO), Regional Office for the Americas of the World Health Organization (WHO). Rubella Watch provides you with the most up-to-date information on the measles, rubella and congenital rubella syndrome (CRS) elimination initiative currently underway in the Americas. Click here to read the latest edition in PDF format.