Washington, D.C., September 27, 2010 (PAHO) - Top health authorities from throughout the Americas opened a meeting today at the Pan American Health Organization (PAHO) to discuss the health situation in the Americas, to identify common health challenges, and to map out effective national and Pan-American strategies to address them. 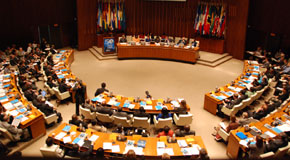 At the opening session of the 50th PAHO Directing Council today, PAHO Director Mirta Roses welcomed delegates and noted the importance of Pan-American cooperation in health, both in the past and now. Pan-American action was critical to such milestones as the global eradication of smallpox and the elimination of polio from the Americas. It has been equally important to recent progress, such as the near-elimination of rubella and congenital rubella syndrome, she said.

"This has been the result of an effort that brings together the action of the Member States, the technical cooperation of our Organization, and the decisive support of key partners," said Dr. Roses.

Secretary of Health of Mexico Dr. José Ángel Córdova, who was elected president of this year's Directing Council, told participants that the issues to be dealt with during this week's meeting are "of great importance for regional public health."

"Though we have faced devastating situations this year resulting from natural disasters and economic crises that have affected the welfare of our people, we have today the opportunity to work in unity and solidarity with this organization to propose actions that can orient or efforts to address those situations and reduce risks to people's health," he said.

Dr. Margaret Chan, Director General of the World Health Organization (WHO), said PAHO's technical cooperation with its member countries both before and during the 2009-10 H1N1 influenza pandemic had helped strengthen the Region's response.

"Every country in Latin America and the Caribbean had the diagnostic capacity to detect H1N1," she told the meeting's opening session through a video link. "This says something about the effectiveness of preparedness efforts."

U.S. Deputy Secretary of Health and Human Services Bill Corr also praised the response of PAHO member countries to the H1N1 pandemic. "When the new virus was first identified in this area of the world, PAHO member countries took immediate action to share surveillance data and expertise. The U.S. was proud to be able to contribute our experts from the Centers for Disease Control and Prevention to the surveillance effort, and $43 million worth of antiviral medication to the PAHO stockpile last year. We also gained from our membership in this Organization. We especially appreciate being able to learn from those of you in the Southern Hemisphere with earlier flu seasons-your experience was invaluable to our efforts to fight H1N1 in this country."

Secretary-General José Miguel Insulza of the Organization of American States (OAS) noted that the past year "was a year of many tragedies." He praised the solidarity shown by PAHO and its member countries during the earthquakes in Haiti and Chile as well as in other natural disasters.

Also during today's session, Dr. Roses presented the Director's Annual Report 2010, which highlights PAHO's technical cooperation in its member countries during 2009 and early 2010. The focus of this year's report is "human security" in Latin America and the Caribbean, particularly PAHO's work in the areas of health economics, food security, environment, personal security, community security, social protection and disease control.

"For most people, security means having a steady job, a safe place to live, enough to eat for themselves and their families as well as freedom from aggression and fear," said Dr. Roses. "Ensuring human security, like ensuring national or property security, is a basic responsibility of governments, and fulfilling this responsibility requires not just preventing conflicts, damages and losses but also creating systems-political, social, environmental, economic, and cultural-that provide people with the opportunities and basic protection for a productive and dignified life."

Dr. Roses called for continued cooperation on these issues, not only between countries but also between the health sector and other sectors.

"In the final analysis, public health is an immense social network that pools efforts, concentrates interests, and represents the longing of millions of people to achieve health for all," said Dr. Roses.

Among the agenda items for this week's meeting are:

Also scheduled is an observance of the 30th anniversary of smallpox eradication and the establishment of PAHO's Revolving Fund for Vaccine Procurement, which has allowed countries to purchase bulk vaccines at lower prices. A recognition ceremony will honor partners in the initiative to eliminate rubella and congenital rubella syndrome in the Americas. The Council will also mark the 50th anniversary of PAHO's Radiology and Radiation Protection Program.

The PAHO Directing Council meets each year to set priorities for Pan-American cooperation in health and to guide PAHO's technical cooperation programs in its Member States.


For more information please contact This email address is being protected from spambots. You need JavaScript enabled to view it., media & communication specialist, Area of Knowledge Management and Communication, PAHO/WHO, Tel +1 202 974 3122, Fax +1 202 974 3143.