Washington, DC, September 28, 2010 (PAHO)--Health ministers from the Americas today reflected on the future of immunization programs by celebrating major milestones in fighting disease and looking ahead to new challenges made possible by advances in vaccine technology. 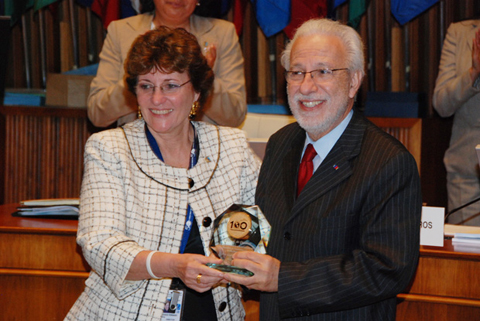 Dr. Mirta Roses Periago, PAHO Director and Dr. Ciro De Quadros, who received a special recognition for his efforts in the area of Immunizations 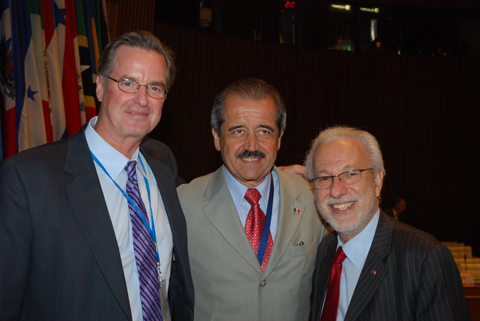 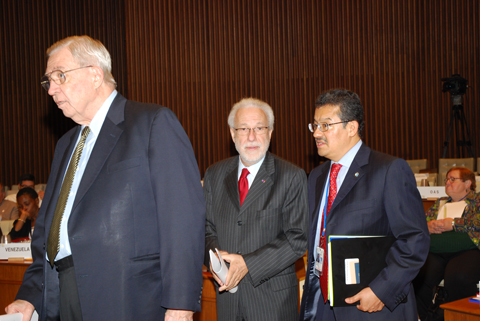 In a session that focused on the 30th anniversary of smallpox eradication and its legacy in public health programs, the ministers also looked at major advances in the Americas, ranging from the 1994 eradication of polio in the Americas, the elimination of measles endemic transmission in 2002, and the planned elimination of rubella and congenital rubella syndrome (CRS). They noted that these achievements were facilitated by the Pan American Health Organization's Revolving Fund for Vaccine Procurement, which has been helping countries buy vaccines at low prices for 30 years.

The ministers form the PAHO Directing Council, which meets each year to set priorities for Pan-American cooperation in health and to guide PAHO's technical cooperation programs in its Member States.

The session on smallpox today featured a key figure in the smallpox eradication saga: Dr. D.A. Henderson, who led the World Health Organization's intensified effort to eradicate the disease, which began in January 1967, when there were more than 10 million cases and 2 million deaths from smallpox in 43 countries. The effort included carefully monitored mass vaccination programs to reach 80% of the population and a new approach to disease prevention — surveillance and containment, with weekly reports of smallpox cases from all health units and special teams to quickly investigate cases and outbreaks. As the program progressed, smallpox was eliminated first in South America, West and Central Africa, then in Asia and finally in East Africa. Global smallpox eradication was finally achieved with the world's last naturally-occurring case in Somalia on 26 October 1977.

"Lest we forget, this was a disease more feared than any pestilence or plague. Three hundred million died from it in the 20th Century, and in our quest to eradicate it, national antipathies were set aside, even in the Cold War," Dr. Henderson said.

Dr. Ciro de Quadros, who worked with Dr. Henderson on the smallpox program at WHO and the subsequent creation of the Expanded Program on Immunization, described the creation and history of the PAHO Revolving Fund, and its key role in the successful eradication of polio in the Americas in 1991, which was certified by an international commission in 1994.

"Were it not for the Revolving Fund, this progress would not have been achieved," Dr. de Quadros said. "This was a beacon of innovation. It was the only such fund in the whole UN system."

Dr. de Quadros, who received a special recognition for his efforts from PAHO, added that many people opposed initial efforts to start this fund, or were skeptical. "But later they became big supporters, when they saw that it was a worthwhile effort and an innovative way to finance our crucial immunization programs."

The impact of immunization programs on the health of the Region's population has been significant, according to Dr. Mirta Roses, director of PAHO. An estimated 174,000 deaths in children are prevented annually in Latin America and the Caribbean. The use of new vaccines, including rotavirus, pneumococcus, and human papillomavirus, will also prevent thousands of cases and deaths in various age groups, contributing to the achievement of the Millennium Development Goals (MDG).

"When this Fund started, we had eight countries participating and purchasing six vaccines through it. This year we have 40 countries, and we are purchasing 28 different antigens." Dr. Roses said. "We are now working to help other regions like the Eastern Mediterranean and Africa establish similar funds."

Dr. Esperanza Martinez, minister of health of Paraguay, said the Revolving Fund "has helped many countries buy vaccines at accessible prices, and has helped avoid speculation and corruption in the purchase process."  She said the countries of the Americas "exhort other regions to start similar funds" to help in vaccine purchase.

For more information please contact This email address is being protected from spambots. You need JavaScript enabled to view it., Knowledge Management and Communication Area, tel (202) 974-3459, fax (202) 974-3143.