Workers' Health: An Investment for Development

28 April 2011 - Protecting and promoting the health and safety of workers is not just a luxury that only developed countries can afford, experts said today at a celebration of the 2011 World Day for Safety and Health at Work held at the Pan American Health Organization (PAHO). Instead, it is an important investment that has major pay-offs for workforce productivity, social stability and socioeconomic growth. 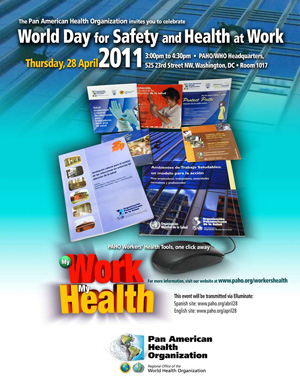 "A family whose breadwinner is disabled is at very serious risk of falling into deep poverty," said Tee Guidotti, Vice-President of Health, Safety, Environment and Sustainability for Medical Advisory Services, adding that the classical economist Adam Smith noted that healthy workers are critical to maintaining economic productivity.

In Latin America and the Caribbean, the safety and health of workers is a growing concern, said Maritza Tennassee, former PAHO Regional Advisor on Workers' Health. A number of countries have devoted increased attention to workers' health, but much progress remains to be made. Among major problems in the region are cancers resulting from asbestos exposure among workers, lung cancer resulting from secondhand smoke in the workplace, hepatitis B infections among health workers as a result of contaminated sharps, and childhood leukemias linked to pesticide exposure in mothers.

Guidotti noted that the returns on investments in workers' health are likely to be higher the earlier they are made, since the costs of these investments are typically lower at earlier stages of economic development. Morevoer, the costs of health care-for injured or ill workers, as for everyone-tend to increase dramatically as countries develop.

Also participating in today's celebration of World Day for Safety and Health at Work was Leslie Nickels, Senior Health Communications Fellow at the National Institute for Occupational Safety and Health, at the U.S. Centers for Disease Control and Prevention (NIOSH/CDC). She described NIOSH's efforts to use social media to improve communication and learning on the job for NIOSH employees and to improve outreach to the agency's various audiences.

"It's important for authoritative sources of information, like NIOSH and PAHO, to be active in using social media to communicate about health and safety." She said communication professionals should be consulted to determine the best social media to use for different audiences.