Venezuela has succeeded in interrupting the transmission of onchocerciasis—also known as river blindness—in one of the three foci where the disease has been endemic, thanks to its National Onchocerciasis Elimination Program. In the country's north-central focus, there are no cases of eye disease attributable to onchocerciasis, and the roughly 14,000 people who live in these rural areas are no longer considered t at risk of infection.

In light of this evidence, suspension of mass treatment with ivermectin (Mectizán ®) is recommended for the onchocerciasis-endemic communities in this area.

Onchocerciasis is a parasitic disease caused by the filarial nematode Onchocerca volvulus, which is transmitted through the black fly of the Simulium genus. This is endemic in parts of Africa and in 13 rural foci in six countries of the Americas. Onchocerciasis is considered one of the neglected diseases and can cause severe injury to the skin and visual damage leading to blindness. The Directing Council of the Pan American Health Organization (PAHO) adopted two resolutions, one in 2008 and the other 2009, that formalized the goal of interrupting onchocerciasis transmission in all foci in the Region by 2012, a process requiring years of continuous effort. In this regard, Venezuela has made great strides toward this goal. 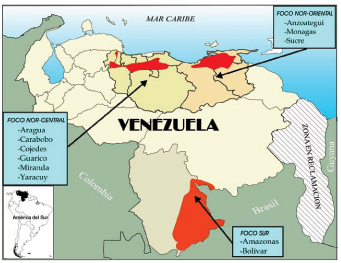