Heads of state from other regions pledge to share lessons, mobilize efforts to fight NCDs

New York, 20 September 2011 (PAHO/WHO) — Heads of state and health leaders from the Caribbean reached out to their counterparts in other regions to urge stronger collaborative action against noncommunicable diseases (NCDs), as the United Nations General Assembly passed a historic resolution on the same subject this week. 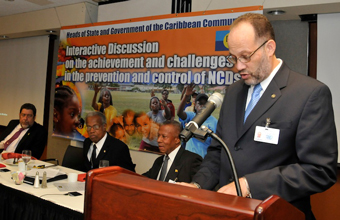 On the right: Ambassador Irwin LaRoque, Secretary General of CARICOM

Qatar's Nassir Abdulaziz Al-Nasser, President of the 66th Session of the United Nations General Assembly, praised Caribbean leaders for being the first to mobilize political commitment at the highest level to fight NCDs and for advocacy that helped produce this week's U.N. summit on NCDs.

"I want to pay tribute to CARICOM particularly for ensuring that the response to NCDs has now been placed at the forefront of global efforts to eradicate poverty and to improve health," said Al-Nasser. "The CARICOM countries have taken a strong leadership role in giving a voice to the challenges faced by the millions of people with NCDs living in low- and middle-income countries around the world."

Heads of state, health ministers and high-level representatives from Aruba, Argentina, Australia, Bahamas, Barbados, Canada, Finland, Grenada, Haiti, Hungary, St. Vincent and the Grenadines, Slovenia, South Africa, Suriname and the United States were among participants in an event, "The Caribbean Takes Stock," organized by the heads of state of the Caribbean Community (CARICOM) with support from the Healthy Caribbean Coalition and the Pan American Health Organization/World Health Organization (PAHO/WHO) to coincide with the U.N. summit on NCDs.

The Caribbean is the subregion in the Americas that has been most heavily affected by the rising epidemic of NCDs such as cancer, heart disease, chronic respiratory illness, and diabetes. NCDs account for nearly 50 percent of disability-adjusted life years lost in the Caribbean, and the economic impact of these diseases threatens the development of the region's small economies.

Caribbean leaders, however, were among the first to mobilize internationally to fight NCDs. Their 2007 heads of state summit—held in Port-of-Spain, Trinidad—produced a joint Caribbean response to the NCD epidemic. The declaration that emerged from that meeting, "Uniting to stop the epidemic of chronic non-communicable diseases," was cited in the resolution on NCDs passed by the U.N. General Assembly today.

The actions called for by the General Assembly echo the approach endorsed by the Caribbean countries, said Prime Minister Ralph Gonsalves of St. Vincent and the Grenadines, who helped draft the U.N. resolution.

"We have to take a multisector approach," said Gonsalves. "We have to involve every single entity, every single area of endeavor, including the public sector and the private sector, and work together to see how we can help our societies overcome the threat of NCDs."

Minister of Health of Canada Leona Aglukkaq agreed: "Collectively we can all share our own lessons, and we can achieve more by collaborating." Canada has provided key support for CARICOM's efforts to fight NCDs.

President Michel Martelly of Haiti promised to make NCDs a top priority of his new government. "I am here to join and unite against NCDs. I do believe we can fight NCDs through education, a good healthcare system, and also by using prevention."

Prime Minister Tillman Thomas of Grenada said small countries such as his face special challenges that make leadership on NCDs even more important. "As leaders we have a moral responsibility to preserve life. "We need to address issues such as patents and the high costs of medicines, particularly for people in small-island states."

Among leaders from other regions attending the CARICOM event was Dr. Danilo Türk, President of Slovenia, who emphasized the importance of addressing NCDs as a development issue. "We should understand development in its totality, and this is impossible without an effective strategy to prevent and control NCDs," he said, adding, "This is a very powerful political message, and I wish everybody success."

Hungarian President Pal Schmitt—a former Olympic gold medalist in fencing--warned that young people in his and other countries are adopting lifestyles that will lead inexorably to high rates of chronic diseases. In Hungary, he said, "sixty percent of youths do nothing—no sports at all." To reverse this trend, Hungary's government has declared sports as a national strategy to fight NCDs and has doubled the budget for sports, "not to create sports champions, but to get the children of Hungary to move," said Schmitt.

South Africa's Minister of Health Aaron Motsoaledi called for a ban on tobacco advertising during the Olympic Games and other sporting events. "No cigarettes and no alcoholic brand is going to create an Olympic champion," he said.

Finland's Minister of International Development, Heidi Hautala, warned of "commercial attempts to change our diets so they are not healthy." She also pledged to work within the European Union to try to mobilize development assistance to fight NCDs in low- and middle-income countries.

Australia's Minister of Health, Nicola Roxon, also thanked CARICOM for focusing attention on NCDs and said his country's recent legislation requiring "plain" non-advertorial packaging of tobacco products is among a number of practices for fighting NCDs that countries should share.  "We know that tackling tobacco is a best buy for public health, said Roxon. "But the tobacco industry will use every tactic they can, so we must work together."

President Desi Bouterse of Suriname closed the event with a personal pledge to stop smoking, despite a longstanding habit. "The time has come to start the fight against these killers," said Bouterse. "As world leaders, we have the responsibility to ensure our citizens attain the highest standard of health. Let's put our words into action."