The Caribbean is the first region to advance the PAHO/WHO and UNICEF "Regional Initiative for the Elimination of Mother-to-Child Transmission of HIV and Congenital Syphilis in Latin America and the Caribbean" with the support from other Caribbean partners including CARICOM, PANCAP, UWI, CDC and UNAIDS. Through the PAHO/WHO convened meeting the Government and key partners in health in English, Dutch, French and Spanish- speaking Caribbean have been actively engaged in the process. In particular, the participating countries at this meeting included: Barbados, Dominican Republic, Guyana, Haiti, Jamaica, Suriname and Trinidad and Tobago.

The meeting sought to provide a technical review of the Field Guide, the Costing Tool and Case-base Surveillance related to the Elimination Initiative (EI) and also the review of the project framework to support mobilization of resources, with emphasis on the Multi-country proposal for Elimination Initiative to the Global Fund for AIDS, TB and Malaria (GFATM). Countries also identified the key gaps and immediate next steps for both the multi-country and country level proposal development and the accompanying technical cooperation needs to accelerate implementation of the EI Framework. 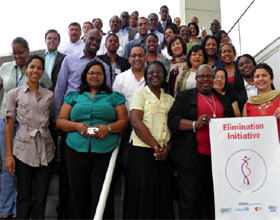 These developments follow on from the 18th Meeting of the Caucus of CARICOM Ministers Responsible for Health in Washington, in which a commitment was launched by the Ministers to eliminate mother-to-child transmission of HIV and congenital syphilis in Latin America and the Caribbean by the year 2015. It was also iterated during the Ninth Annual General Meeting of the PANCAP, in Grenada, where approximately 120 Caribbean stakeholders endorsed the Initiative for Elimination of Mother-to-Child Transmission of HIV and Congenital Syphilis.

The goal of this initiative is to reduce the incidence of mother-to-child HIV transmission to less than 5 % by the year 2015 and to reduce congenital syphilis to fewer than 0.5 cases per 1,000 live births, thereby eliminating these diseases as public health problems. The initiative also emphasizes the need to strengthen and integrate primary health care systems and to improve surveillance.

PAHO's Director, Dr. Mirta Roses Periago, commended the Caribbean for their leadership in public health, including the accomplishments in the elimination of polio, measles and smallpox and is convinced that the Caribbean has the potential to become the first region in the developing world to achieve the elimination targets.