Theme: The WHO Framework Convention on Tobacco Control 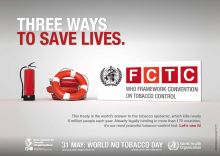 The World Health Organization (WHO) selects "The WHO Framework Convention on Tobacco Control" as the theme of the next World No Tobacco Day, which will take place on Tuesday, 31 May 2011.

The WHO Framework Convention on Tobacco Control (WHO FCTC) is the world's foremost tobacco control instrument. The first treaty ever negotiated under the auspices of WHO, it represents a signal achievement in the advancement of public health. In force only since 2005, it is already one of the most rapidly and widely embraced treaties in the history of the United Nations, with more than 170 Parties. An evidence-based treaty, it reaffirms the right of all people to the highest standard of health and provides new legal dimensions for cooperation in tobacco control.

The world needs the WHO FCTC as much as, if not more than; it did in 1996 when the World Health Assembly adopted a resolution calling for an international framework convention on tobacco control. Tobacco use is the leading preventable cause of death. This year, more than 5 million people will die from a tobacco-related heart attack, stroke, cancer, lung ailment or other disease. That does not include the more than 600,000 people — more than a quarter of them children — who will die from exposure to second-hand smoke. The annual death toll from the global epidemic of tobacco use could rise to 8 million by 2030. Having killed 100 million people during the 20th century, tobacco use could kill 1 billion during the 21st century.

As with any other treaty, the WHO FCTC confers legal obligations on its Parties — that is, on the countries (and the European Union) that have formally become a Party by any of the mechanisms that a country can use to be a Party: Ratification, accession and acceptation.

Among these obligations are those to:

The treaty also recognizes the importance of international cooperation and of helping low- and middle-income countries to meet their treaty obligations.

The campaign will focus on the following key message: that countries must fully implement the treaty to protect present and future generations from the devastating health, social, environmental and economic consequences of tobacco consumption and exposure to tobacco smoke.

Other key messages will include:

The treaty has already proved its efficacy in the fight against tobacco.

Nevertheless, as the Secretariat of the treaty explained in its recent Reports of the Parties and global progress in implementation of the Convention: key findings, "Implementation rates continue to vary substantially between different policy measures."

More must be done for the treaty to reach its full potential, as the Parties themselves recognize. At their recent meeting in Punta del Este, Uruguay, they urged all countries to ratify the treaty, to fully implement its provisions and to adopt its guidelines. Furthermore, they reaffirmed their commitment to prioritize the implementation of health measures designed to control tobacco consumption.

On World No Tobacco Day 2011, and throughout the following year, WHO will urge countries to put the treaty at the heart of their efforts to control the global epidemic of tobacco use.

By heeding WHO's call, countries will enhance their ability to significantly reduce the toll of tobacco-related diseases and deaths in line with their treaty obligations.