PAHO photography exhibit, "Vaccination: An Act of Love," on display at Summit of the Americas 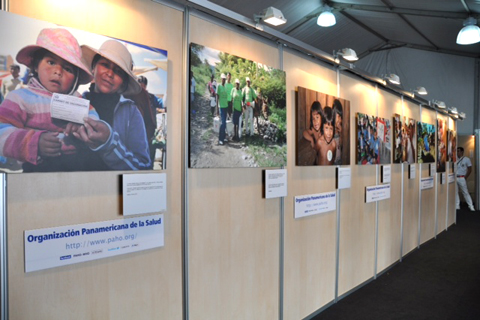 The exhibit tells the story of Vaccination Week in the Americas through pictures of its beneficiaries, including a mother who proudly displays her child's vaccination card in Bolivia and three children in an indigenous community in Brazil, among others. More than 365 million people have been vaccinated through this initiative over the past nine years.

What began as a response to a measles outbreak in South America will reach across the globe in 2012 with the simultaneous celebration of the first World Immunization Week. More than 180 countries and territories around the world will hold events as part of the global campaign.

The Vaccination: An Act of Love exhibit will be open to visitors from 9 a.m. to 7 p.m. on 10-13 April in the Expo Room of The Americas Convention Center, where the Social Actors Forum will meet in preparation for the VI Summit of the Americas (14-15 April). The forum will address topics related to poverty and inequality, disasters, access and use of technology, and security and integration in the Americas.

In her message for the VI Summit of the Americas, PAHO Director Dr. Mirta Roses Periago highlighted the high level of political support for health issues in the Americas region, which has facilitated collective public health activities whose benefits extend beyond the hemisphere.

"An example of this is the success of Vaccination Week in the Americas, which, on the occasion of its 10th anniversary, proudly welcomes the celebration of the first World Immunization Week," she said.

PAHO was established in 1902 and is the longest functioning public health organization in the world. It works with all the countries of the Americas to improve the health and quality of life of their peoples. PAHO serves as the Regional Office for the Americas of WHO.