The World Health Organization (WHO) selects "tobacco industry interference" as the theme of the next World No Tobacco Day, which will take place on Thursday, 31 May 2012.

16 September 2011 - The World Health Organization (WHO) selects "tobacco industry interference" as the theme of the next World No Tobacco Day, which will take place on Thursday, 31 May 2012.

The campaign will focus on the need to expose and counter the tobacco industry's brazen and increasingly aggressive attempts to undermine the WHO Framework Convention on Tobacco Control (WHO FCTC) because of the serious danger they pose to public health. 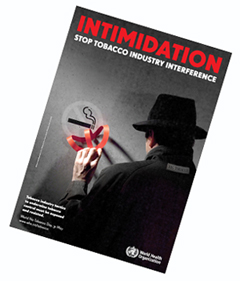 As more and more countries move to fully meet their obligations under the WHO FCTC, the tobacco industry's efforts to undermine the treaty are becoming more and more energetic.

For example, in an attempt to halt the adoption of pictorial health warnings on packages of tobacco, the industry recently adopted the novel tactic of suing countries under bilateral investment treaties, claiming that the warnings impinge the companies' attempts to use their legally-registered brands.

Meanwhile, the industry's attempts to undermine the treaty continue on other fronts, particularly with regard to countries' attempts to ban smoking in enclosed public places and to ban tobacco advertising, promotion and sponsorship.

World No Tobacco Day 2012 will educate policy-makers and the general public about the tobacco industry's nefarious and harmful tactics.

In addition, Article 5.3 of the treaty states that "in setting and implementing their public health policies with respect to tobacco control, Parties shall act to protect these policies from commercial and other vested interests of the tobacco industry in accordance with national law".

Furthermore, the guidelines to the implementation of Article 5.3 state that Parties are recommended to "raise awareness about tobacco industry interference with Parties' tobacco control policies."

On World No Tobacco Day 2012, and throughout the following year, WHO will urge countries to put the fight against tobacco industry interference at the heart of their efforts to control the global tobacco epidemic.