Launch of book on Lee Jong-Wook, former Director General of WHO

On the sixth anniversary of the death of the former Director General of the World Health Organization (WHO), the book Lee Jong-Wook, a life health and politics was launched within the framework of the Sixty-fifth World Health Assembly. The Director of the Pan American Health Organization (PAHO), Dr. Mirta Roses attended the launch of the book by Desmond Avery, which chronicles the life of Dr. Lee and his work in health. Other participants in the event included the Director General of WHO, Dr. Margaret Chan, Rim Chemin, Minister of Health and Welfare of the Republic of Korea, Dr. Kwangsu Han, from the Korean Foundation for International Healthcare (KOFIH) as well as the widow of Dr. Lee, Reiko Lee. The launch of the book is a joint event between WHO and KOFIH. 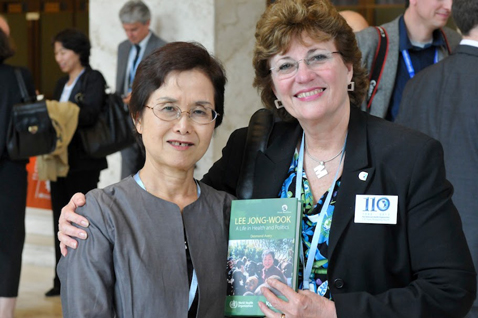