WHO: Four ways to reduce hepatitis infections in people who inject drugs

Washington/Geneva | 21 July 2012 — The World Health Organization (WHO) has identified four key actions countries can take to prevent viral hepatitis B and C among people who inject drugs.  Of the estimated 16 million people who inject drugs worldwide, it is estimated that 10 million are infected with hepatitis C. An additional 1.2 million are infected with hepatitis B.

Risk from shared syringes and needles 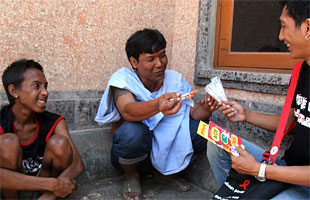 Many drug users are unable to obtain sterile syringes: in some countries it is illegal to distribute or possess syringes for non-medical purposes. The risk of contracting hepatitis and HIV infection occurs when people share syringes and needles. Used injection equipment retains traces of blood. If that blood contains HIV, hepatitis or another type of virus, the next person using the syringe could be infected.

Reducing the risk of HIV and hepatitis infections

A number of countries have established programmes to reduce HIV infections among people who inject drugs.

"Most of the interventions that prevent HIV transmission between people who inject drugs are virtually the same as those for preventing viral hepatitis B and C," says Dr Gottfried Hirnschall, Director of the WHO Department for HIV/AIDS. "So it makes sense to reduce the risk of both infections by linking viral hepatitis prevention with HIV prevention, care and treatment."

Hepatitis is an inflammation of the liver. Together, hepatitis B and C are the most common cause of cirrhosis and cancer of the liver. Viral hepatitis progresses faster among people living with HIV because their immune systems are weaker, and causes more severe liver-related health problems than it does among people without HIV infection.

"Countries that have adopted a public health approach to injecting drug use and HIV have been the most successful in turning round their HIV epidemics. We need to do the same for hepatitis," says Dr Ying-Ru Lo of the HIV Department at WHO.

The new evidence-based guidelines are designed for use by national public health officials, managers of HIV, drug dependence and harm reduction programmes, civil society and health workers in low- and middle-income countries. They are intended to be tailored and implemented according to local situations and needs.

The XIX International AIDS Conference is taking place in Washington D.C. 22-27 July 2012. The theme of the conference is "Turning the Tide Together". WHO is presenting proposals to accelerate the end  of HIV transmission. This includes a discussion paper on strategic use of antiretrovirals (ARVs), a global report on drug resistance, guidance on the prevention and treatment of HIV and STIs among sex workers, and guidance on the use of ARVs as Pre-Exposure Prophylaxis (PrEP) among people at particularly high risk of HIV.

Full guideline document on the prevention of viral hepatitis B and C and HIV among people who inject drugs is available at: https://www.who.int/hiv/pub/guidelines/hepatitis/en/

And more information on HIV in people who inject drugs and harm reduction at
https://www.who.int/hiv/topics/idu/en/index.html

In Washington D.C.
Sarah Russell, Coordinator, Department of Communications, WHO
Mobile: +41 79 598 6823, Email: This email address is being protected from spambots. You need JavaScript enabled to view it.

In Geneva
Glenn Thomas, Communications Officer, WHO
Mobile: +41 79 509 0677, Email: This email address is being protected from spambots. You need JavaScript enabled to view it.