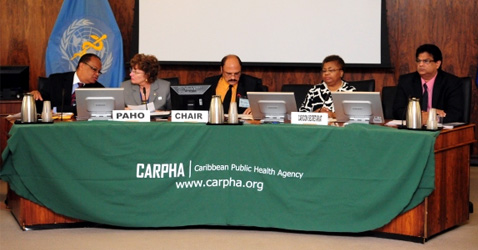 "It is my hope that the members of the international community who are committed to a people-centered approach to public health in the Caribbean will join PAHO in assuring the long-term sustainability of CARPHA in serving the peoples of the Caribbean," said PAHO Director Dr. Mirta Roses.

Minister of Health of Guyana Dr. Bheri Ramsaran serves as Chairman of the CARPHA Executive Board. He said the new agency seeks to be "a first-rate institution that would contribute to the health and economic well-being of not only the citizens of the Caribbean but also the many visitors to our shores from all over the world."

Deputy Secretary-General of CARICOM Lolita Applewhaite urged countries outside the Caribbean to also support the new agency, to enhance health security within and beyond the region.

"CARPHA &hellip; is of benefit not only for the countries of CARICOM but for the wider Caribbean, the Americas, and the world, as it represents a collective mechanism for protecting the public health of these economically fragile small island states and the region as a whole," she said.

CARPHA will be headquartered in Port-of-Spain, Trinidad and Tobago, whose Minister of Health, Dr. Fuad Khan, said the merger of the five institutions will allow for more effective investments and action to protect and promote public health.

"Undoubtedly, we are desirous of a Caribbean in which the health of our citizens is a priority and should always be managed with an eagle's eye and with the most advanced methods available," he said.

Dr. Jerome Walcott, Interim Executive Director of CARPHA, said the new agency reflects the "strong political commitment to health at the highest levels." CARPHA demonstrates a continuing commitment to the principle expressed in the Nassau Declaration of 2001, that "the health of the region is the wealth of the region," said Dr. Walcott.

CARPHA will be housed initially on the site of the former CAREC, with a new, permanent home expected to be completed by 2014.

Other countries represented at today's meeting include Canada, the United States, and the United Kingdom, which have provided support for the development of CARPHA, as well as other countries including Argentina.

"I am glad to see expanding support for health in the Caribbean," said Dr. Roses.