PAHO's Manager for Health Surveillance and Disease Prevention and Control, Dr. Marcos Espinal, has been honored with the 2012 Princess Chichibu Global TB Memorial Award in recognition of his achievements in global tuberculosis control. 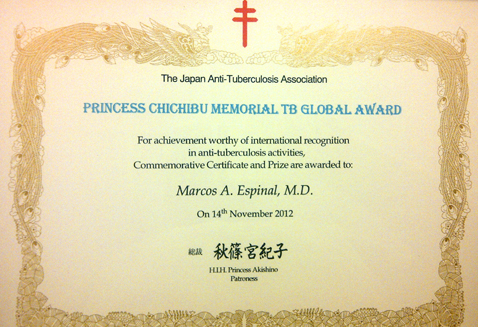 The prize was established by the Japan Anti-Tuberculosis Association (JATA) to commemorate the work of the late Princess Chichibu, a member of the Japanese imperial family who served as Patroness of JATA for 55 years. The award is given annually to someone who has shown remarkable achievements in the global fight against TB, independent of his or her nationality.

The award was presented to Dr. Espinal at the opening ceremony of the 43th World Conference on Lung Health of the International Union against Tuberculosis and Lung Diseases, in Kuala Lumpur, Malaysia, on 14 November 2012. In his acceptance speech, Dr. Espinal said he was accepting the award on behalf of PAHO and WHO and thanked JATA, the Union, the international community, and his family for such a high honor. The prize includes US$10,000, which will be used to continue supporting capacity-building efforts in the Region of the Americas through PAHO.

Dr. Espinal received his medical degree from the Autonomous University of Santo Domingo, Dominican Republic, and trained in pediatrics at the Robert Reid Cabral Children's Hospital. He has a master's and a Ph.D. in public health from the University of California at Berkeley. He served as manager of WHO's global DOTS-plus initiative in Geneva.

More than 200,000 people still contract tuberculosis each year in the Americas, and nearly 20,000 die of the disease. Nevertheless, these figures represent a 60% reduction in cases and a two-thirds reduction in deaths from TB in the Region since 1990.