The Minamata Convention on Mercury

Due to environmental and health concerns, mercury is the first hazardous element targeted for global intervention; this effort aims to protect human health and welfare by reducing anthropogenic releases of mercury into the environment.

International concern and support for a binding convention for mercury emissions began as early as 2003. In 2009, after the US declared its intent to move towards a binding mechanism, the UNEP Governing Council established the grounds for a negotiating body. An International Negotiating Committee (INC) was responsible for preparing the text of the mercury contract, and the process of negotiation was to occur over a series of five assemblies (in which representatives of participating nations would collectively determine the context of the treaty).

The Intergovernmental Negotiating Committee's (INC) work was carried out over five sessions in various countries:

On January 19, 2013, following the fifth, and final, negotiating session (held in Geneva) the convention manuscript was agreed upon by 147 nations. It was formally adopted on October 10, 2013, and 86 countries signed on the first day. Once this convention is ratified by 50 nations, the terms of the Minamata Treaty will enter into effect. To date, although 97 countries have signed the manuscript, the United States is the only country who has also ratified the convention — this means that another 49 must also do the same before the Minamata Treaty will enter into force. Click here to see signatures and ratifications by country.

One pertinent aspect of the negotiations was the discussion about the provision of timely and sufficient technical and financial cooperation for capacity building and convention compliance. The INC discussed financial arrangements to be included in the convention to support parties in the implementation of the convention; the Global Environment Facility (GEF) was designated as the main financial mechanism of the Minamata Convention on Mercury. The GEF played a large role in the negotiations of the Convention, and aims to provide up to $10 million for the funding of an "early action pre-ratification program" to be put into effect immediately as requested by eligible signatory countries. This program is intended to aid in the assessment of the respective country's mercury situation as well as the identification of necessary policy and regulatory modifications that will be required for the implementation of the Convention.

Options to phase out mercury mining and trade were also discussed. Storage of remaining mercury was addressed, and mercury trade regulations were considered.

This website is intended to convey to health related professionals some of the potential implications that may arise from the implementation of the Mercury Global Convention. Action plans will likely be useful for different areas of intervention, especially risk mitigation on artisanal mining, mercury measuring devices in health care, and others. It is expected that extensive work on human and environmental health — surveillance and monitoring of exposures and health effects of different mercury forms and compounds — will be even more important in the future(3).

The Minamata Treaty proposes to outlaw the production, export, and/or import of mercury-added products (listed in part I of Annex C) after the phase out date specified to each of the products — most of which are to be abolished by 2020. Allowable-use exemptions with expiration date for exemptions, or simply allowable-use exemptions, or the options of prohibition, phase-out and essential use. Also the precise products to be included in each of these options and categories are still to be defined.

The fact that artisanal and small-scale gold mining activities accounts for almost half of the global mercury use is recognized. This recognition is not in isolation from the fact that these economic activities play a significant role on poverty alleviation. National action plans and time frames are being considered with technical cooperation for gold mining with mercury use alternatives development and implementation, including environmental education and health promotion. Implementing best practices with knowledge sharing are consistent with on-going work implemented by several international agencies — UNIDO, ILO, UNEP, WHO to mention a few. In particular, the INC has prepared text that would require countries with more than insignificant use of mercury in artisanal and small-scale gold mining to develop a public health strategy relating to such mining.

Mercury emissions and releases to atmosphere, water and land could be addressed under available technology and best practices guidelines combined with monitoring. Inventories of mercury use, emissions and releases are being discussed. Sharing information on strategies and methods to work on these different inventories will be key for a collective learning.

Discussions address actions needed to reduce atmospheric emissions from different sources — coal-fired power plants, industrial boilers, waste incinerators, cement, artisanal gold mining and others. This will include alternative technologies. Similarly requirements for mercury release into water and land environment are being discussed. Some interesting experiences have been shared (2). Guidelines in multiple languages will be helpful to harmonize and disseminate methods and outputs regarding mercury storage, wastes and contaminated sites.

The charts below depict Global Anthropogenic Mercury Emissions for the years 2008 and 2010, respectively. 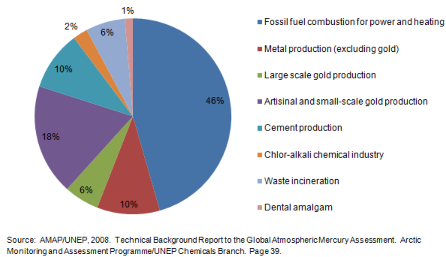 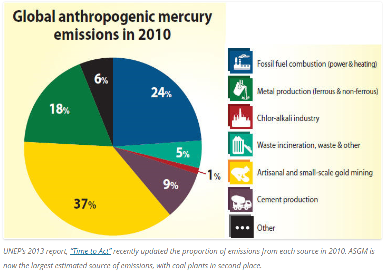 **For the most updated information available on worldwide atmospheric mercury emissions, releases to the aquatic environment, and the transport and fate of mercury in the global environment, see the United Nations Environment Programme's Global Mercury Assessment 2013: Sources, Emissions, Releases, and Environmental Transport.

4.  Sectorial Roles in the Implementation of the Treaty

Different sectors — health, environment, industry and education to mention a few, should interact for public information, awareness and education.

Financial resources and technical and implementation assistance will require coordination among different institutions from developed, developing and development transition countries. Financial arrangements are being discussed to assist developing country parties and parties with economies in transition implement the convention. . The INC is discussing proposal for facilitating information dissemination and exchange for the implementation of risk reduction strategies, with attention from different sectors and stakeholders. Coordination among different committees and involved ministers will be required.

Another aspect being discussed relates to the need for awareness-raising, research and monitoring, and communication. The draft text includes provisions relating to the need of providing public information on health and environmental effects of mercury; products and processes that involves mercury and potential alternatives, and research to increase health protection from mercury exposures. For such, communication material in different language and personnel training will be required.

There are a number of possible roles for the health sector, depending on the final text of the convention. These may include: facilitating implementation of any obligations relating to mercury use in health care, such as thermometers, sphygmomanometers and dental amalgam; public health strategies relating to artisanal and small-scale gold mining; and communication for health workers and the general public about health implications of different mercury forms and compounds exposures. Finally, it will be interesting to evaluate health impacts of policies in place for the mercury convention. It is under discussion whether a dedicated article regarding health aspects will be included in the convention.