Port-au-Prince, 27 February 2013 (PAHO/WHO) — The Pan American Health Organization/World Health Organization (PAHO/WHO) has recognized the efforts of the highest-level Haitian authorities to protect children from measles, rubella, congenital rubella, and poliomyelitis, diseases that have been eliminated in Haiti and throughout the Americas through vaccination. 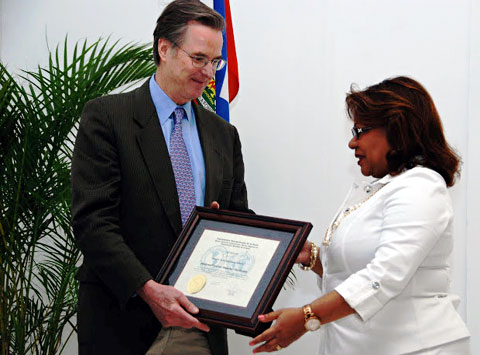 As part of the presentation of the National Plan for the Elimination of Cholera in Haiti, PAHO/WHO Deputy Director Jon Andrus delivered two plaques to Haitian Minister of Health Dr. Florence Duperval Guillaume—one for the Minister and the other for Haitian President Joseph Martelly in recognition of their "diligent and unequivocal support that facilitated excellent coverage during the intensive activities for children's health carried out from 21 April to 21 June 2012 to eliminate measles, rubella, congenital rubella, and poliomyelitis."

In June of last year, Haiti's Ministry of Public Health and Population successfully concluded an intensive campaign for child health. Among other activities, more than 3 million doses of the polio vaccine were administered to children under 9 years old and another 3 million doses of the measles/rubella vaccine were administered to children between 9 months and 9 years old.

Andrus congratulated the Minister of Health for her leadership and noted that control of the above-mentioned diseases "requires major efforts by the national authorities."

In 2010, Haiti reported national vaccination coverage rates of less than 70%. In spite of this low coverage, however, the country has recently achieved successes with regard to immunization. In 2012, Haiti introduced the pentavalent vaccine, which protects against diphtheria, tetanus, and whooping cough. The vaccine also protects against hepatitis B and Haemophilus influenzae type b (Hib), bacteria that can cause meningitis and pneumonia. Currently, Haiti is preparing to introduce the rotavirus and pneumococcal vaccines.

A five-year immunization plan launched in Haiti in 2011 includes activities to consolidate the elimination of measles, poliomyelitis, and rubella. It also aims to prevent diseases and save lives by expanding coverage and introducing new vaccines. A key approach of the plan is to strengthen the routine immunization program.