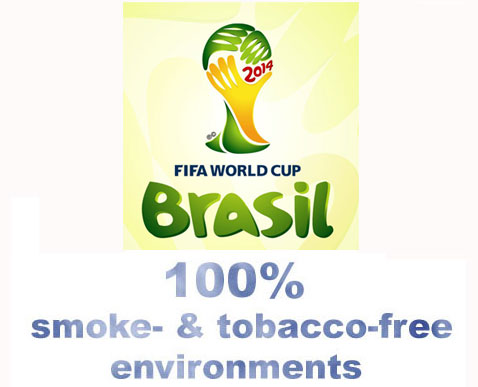 Fans and players at the 2014 games will benefit from 100% smoke- and tobacco-free environments following WHO's recommendations, announced FIFA and the Local Organizing Committee (LOC) in Brazil on March 7.

"This decision will mean a healthier environment for athletes, staff, and soccer fans from Brazil and around the world," said PAHO Director Dr. Carissa F. Etienne. "It also means that one of the world's most important sporting events will not be a venue for promoting tobacco use. We commend FIFA for its concern about the health of soccer fans everywhere."

The tobacco ban applies to games in the 12 Brazilian cities that are hosting the 2014 World Cup as well as to the FIFA Confederations Cup games, being held in six Brazilian cities on 15—30 June 2013. It applies to both indoor and outdoor spaces within the perimeters of each participating stadium and means that no smoking, no sales of cigarettes or other tobacco products, and no tobacco advertising, promotion or sponsorship will be allowed at the games.

"Besides a smoke-free environment, a tobacco-free World Cup means the tobacco industry cannot use its deceptive marketing tactics to recruit new smokers among the thousands of young fans who attend the games," said Adriana Blanco, PAHO/WHO's top tobacco control advisor. "It supports the trend of tobacco-free mega-events and helps advance social change toward rejection of tobacco."

Globally, tobacco kills an estimated 6 million people each year, 1 million of them in the Americas. In the last century, some 100 million people died from tobacco-related causes. In addition to lung cancer, tobacco is a cause of 12 other cancers and is a risk factor for many serious health problems, including cardiovascular and respiratory diseases. Tobacco is the only legal consumer product that kills when used exactly as intended by the manufacturer.

Starting with the 2002 World Cup games in Korea and Japan, the last four FIFA World Cups have been tobacco-free. FIFA's tobacco-free policy was developed with support from WHO, which is also providing operational guidelines for the policy's implementation.

"This is part of a very positive trend in the Americas and the world," said Blanco. "We see major sporting events going tobacco-free, including the Olympic games and the World Cup. It also reflects Brazil's strong record of leadership, as a country, in implementing tobacco control."

"The decision to make Brazil 2013 and Brazil 2014 tobacco-free is a natural step in the history of our flagship events," said FIFA Secretary General Jérôme Valcke in making the announcement. "FIFA and the LOC are proud of once again following the recommendations of the World Health Organization in this regard. FIFA recognizes that tobacco use and exposure to second-hand smoke are harmful and supports WHO's global efforts with a genuine interest in promoting health and security."

PAHO, founded in 1902, is the oldest international public health organization in the world. It works with its member countries to improve the health and the quality of life of the people of the Americas.