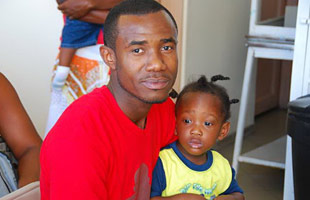 Port-au-Prince, Haití, April 2013 (PAHO/WHO) — Jean-Pierre knows that vaccinating his daughter, Isabel, is one of the best gifts he can give her. The head of the family is familiar with tragedy and death because he has seen them up close in the last three years: during the devastating earthquake that ravaged Haiti in January 2010 and took the lives of over 220 000 people; as a result of the winds and rains of Hurricane Thomas in October 2010; and during the ongoing cholera epidemic that began in November 2010.

Haiti is among the countries in the Americas with highest child mortality rates. The main causes are acute respiratory infections like pneumonia, diarrhoeal diseases, anaemia and chronic malnutrition. Vaccines are an effective way of preventing many of these diseases. The "five-in-one" pentavalent vaccine protects children from diphtheria, tetanus, whooping cough, hepatitis B and Haemophilus influenzae type b (Hib) which causes pneumonia and meningitis.

The young father's priority is to protect his daughter against diseases that can endanger her life. "We brought her here to be vaccinated," Jean-Pierre says while waiting to be called for the life-saving shot at the Eliazar Germain Hospital in Pétion-Ville, a suburb of Port-au-Prince. "Vaccination helps prevent diseases in children, especially because they play everywhere and often get sick."

This is why the Pan American Health Organization (PAHO), WHO's Regional Office for the Americas, has been working with Haiti's Ministry of Health and Population to integrate the new vaccine into the national immunization programme — putting Haiti on par with the rest of the Americas.

Jean-Pierre echoes messages that have been promoted by Haitian health workers and Ministry of Health officials since November 2012, when the pentavalent vaccine was introduced. Since then, growing numbers of children have been showing up to get vaccinated in health centres. Estimates suggest that some 3000 children under the age of five will be saved over the next four years as a result of the adoption of the new vaccine.

"Introduction of the pentavalent vaccine has been a good experience. It has brought us many patients; there is great demand," says nurse Denisse Jean Baptiste, head of immunization in the Eliazar Germain Hospital, pointing to the waiting room crowded with parents and children.

"The pentavalent vaccine is essential to fight childhood illness and reduce child mortality," says Jeannot François, Director of the Ministry of Health's Expanded Programme on Immunization. "Although it is too soon to measure the impact, early results show that communication and social mobilization have been effective, since many parents are now interested in a vaccine that was previously available only in the private sector. Now it is available free of charge for everyone."

The Ministry's goal is to administer three doses of the vaccine to 288 000 children under 1 year old. To reach the goal, WHO recruited and trained a team of 12 Haitian doctors, educated in Cuba and the Dominican Republic, to in turn train health workers to use the pentavalent vaccine throughout the country's 10 departments.

Haiti's introduction of the new vaccine was supported by WHO, the GAVI Alliance and the U.S. Centers for Disease Control and Prevention (CDC), who also helped to ensure that the vaccines are bought at affordable prices and distributed appropriately.

In the hospital in Pétion-Ville, a nurse calls little Isabel to get her vaccine and a vitamin A capsule. Twenty or more children still wait their turn to receive an injection that might make them cry a bit, but can also save their lives. Surrounded by vaccine and syringes, Denisse Jean Baptiste says: "Thank you on behalf of the children of Haiti."