Port-of-Prince, Haiti, 27 April 2012 (PAHO/WHO) -- In her first official visit to Haiti, on the eve of the launch of the 11th Vaccination Week in the Americas, PAHO Director Carissa F. Etienee met with First Lady Sophia Martelly and Minister of Health Florence Guillaume of Haiti to analyze technical cooperation priorities in the country. 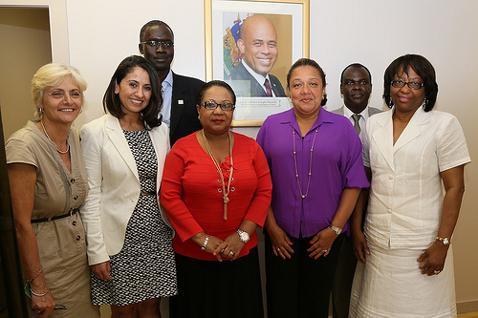 "Haiti is one of my top priorities," said Etienne, congratulating First Lady Martelly for her health advocacy and Minister of Health Guillaume for having been named a Harvard Health Leader for 2013.

In a meeting in the National Palace, which was destroyed in the 2010 earthquake, Martelly thanks Etienne for PAHO/WHO's support in strengthening Haiti's health system.

"We work to build capacity, to strengthen the work of health authorities in countries," said Etienne, adding that "this is the significant contribution" that the world's oldest international health organization provides to its Member States.

Guillaume highlighted immunization, maternal-child health, and cholera as her country's top health priorities. Haiti has achieved high rates of immunization coverage for measles, rubella, and polio, and has reported no cases of these diseases. Last year, with support from PAHO/WHO and other partners, the country introduced the pentavalent vaccine and plans to begin vaccinating against tetanus and rotavirus during 2103.

"We want to expand access to maternal-child health so that women have prenatal care and give birth in maternity centers," said Guillaume. According survey data (Emus 5) for 2011, only 36% of Haitian women give birth in institutions, up 11 points from 2005.

Since 2012, Haiti with support from PAHO/WHO and financing from the Canadian International Development Agency (CIDA) has been implementing a program for free obstetric and pediatric care for women and for children under 5 in 17 institutions in the country. The program also provides family planning services. Since its launch the program has benefitted more than 29,700 women and nearly 68,000 children.

Last February, Haiti launched its new National Plan for the Elimination of Cholera, a disease that has sickened 650,000 people and claimed over 8,000 lives since October 2010. PAHO/WHO is working with its partners in the Regional Coalition for the Elimination of Transmission of Cholera from Hispaniola to mobilize financial resources and to provide technical support for the national plan.

The 10-year plan includes investments in water and sanitation infrastructure as well as pilot projects for cholera vaccination. PAHO/WHO has pledged US$500,000 toward ensuring clean water in health facilities and for technical cooperation in vaccination.