Country seeks to protect 1.2 million women of childbearing age and more than 240,000 babies born each year

Port-of-Prince, Haiti, 27 April 2013 (PAHO/WHO) — Haiti today kicked off a new campaign to vaccinate women of childbearing age against tetanus during a launching event for the 11th Vaccination Week in the Americas. 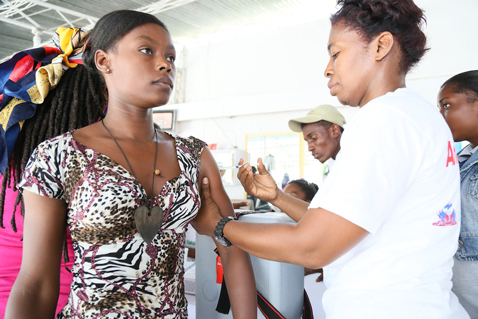 On hand for the launch were representatives of Haiti's Ministry of Public Health and Population, the Pan American Health Organization/World Health Organization (PAHO/WHO), UNICEF, the GAVI Alliance, and the U.S. Centers for Disease Control and Prevention.

The tetanus vaccination campaign, which will be carried out April 29 to May 5, seeks to protect some 1.2 million women aged 15 to 49 against tetanus and to protect more than 240,000 Haitian babies born each against neonatal tetanus, an often fatal disease that globally claims over 58,000 babies lives each year.

At the launch, held in the Carrefour commune of metropolitan Port-of-Prince, Minister of Health of Haiti Florence D. Guillaume said, "Vaccination has always been a priority for prevention and improving health and today we are reaffirming that commitment." She said the campaign would help accelerate Haiti's progress in reducing its infant mortality rate, which is among the highest in the Americas. 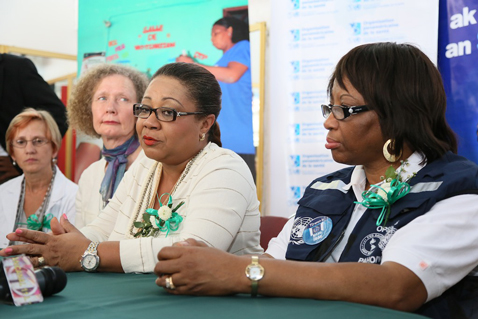 "Thanks to its political will, Haiti has achieved a great deal in immunization in recent years," said PAHO/WHO Director Carissa F. Etienne. She noted that Haiti is in the process of being certified free of measles and rubella and in recent years has reported no cases of polio.

To protect these achievements, Haiti will also carry out routine immunization during Vaccination Week, with special efforts to reach children under 1 in areas of low coverage and communities along the border with the Dominican Republic.

Minister of Health Guillaume announced that Haiti will be introducing rotavirus vaccine during the second half of 2013, targeting children under age 1. Rotavirus causes diarrhea and can result in hospitalization and death. In the Americas, more than 26 countries and territories have incorporated rotavirus vaccine into their routine immunization programs.

Helen Evans, deputy CEO of the GAVI Alliance, said "GAVI has been a partner of Haiti's for 12 years and has worked with the country to prepare for the introduction of rotavirus vaccine, following its adoption of pentavalent vaccine last year." Evans said GAVI's support is aimed at ensuring that Haitian children have "a healthy start in life."

Etienne noted that "with the introduction of new vaccines in the national schedule, Haiti has begun a new era in vaccination." Haiti also plans to begin vaccinating against pneumococcus in 2014.

PAHO/WHO has been supporting efforts in Haiti to improve maternal-child health, strengthen routine vaccination, and develop a culture of prevention within the population.

Other participants in the launch of Vaccination Week in the Americas, whose theme this year is "Vaccination: a shared responsibility," included representatives of the Brazil-Cuba-Haiti Tripartite Project, the Canadian International Development  Agency (CIDA), and the Haitian Red Cross, among others.

Vaccination Week in the Americas is the largest international health effort in the Western Hemisphere. Since 2003, it has taken the benefits of vaccines to more than 411 million people of all ages, including more than 140 million children under 5 and nearly 139 million senior citizens. The initiative's success helped inspire the launch in 2012 of World Immunization Week, which is being celebrated again this year by more than 180 countries worldwide.