Geneva, Switzerland, 20 May 2013 (PAHO/WHO) — Ministers of health from Commonwealth countries and territories met in Geneva on the eve of the 66th World Health Assembly to discuss some of the public health priorities that will be dealt with at the assembly, which gets under way today.

The Commonwealth meeting, on May 19, focused on two main issues, mental health reform and health in the post-2015 development agenda, in preparation for the World Health Assembly's discussions on a new plan of action on mental health, progress toward achieving the Millennium Development Goals (MDGs), and a resolution on universal health coverage.

Antigua and Barbuda's minister of health, Edson Joseph, described his country's efforts to expand access to mental health services, ensure patients' rights to the least restrictive care possible, and improve its system for accrediting mental health professionals. Joseph said major challenges that still lie ahead include sustainable financing for mental health services, overcoming stigma and discrimination, and addressing treatments gaps, especially in Barbuda and for immigrants from other islands.

Canadian vice-minister of health Krista Outhwaite described a mental health strategy her country launched in 2003 that promotes the rights of mental health patients and seeks to guarantee access to needed treatment. The strategy was developed through a participatory process involving thousands of Canadians from different sectors. Outhwaite said that successfully addressing mental health problems requires an integrated approach as well as a proactive role by the media, the private sector, and others, especially to overcome stigma and discrimination.

Similar efforts in Trinidad and Tobago and Jamaica have focused on community-based mental health care, especially for youths, and incorporating sectors other than health into these efforts.

PAHO Director Emeritus George Alleyne presented a draft document as a basis for discussion of a joint position among Commonwealth countries on the post-2015 development agenda. He urged a focus on "human development" and the impacts of health in the economic, social, and environmental spheres. Alleyne said universal health coverage and the challenge of "health for all" provide a framework for addressing challenges ranging from noncommunicable diseases to maternal and infant mortality, HIV and malaria. He said universal health coverage is a necessary but insufficient tool to guarantee health, and that maximizing health throughout the life course entails much more. 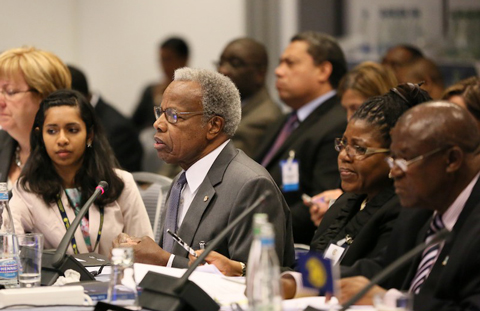 Delegates from Bahamas and Trinidad and Tobago, among other countries, agreed that universal access to health services should be part of the post-2015 agenda, along with other issues including nutrition and noncommunicable diseases.

Thirteen countries in the Americas are members of the Commonwealth, a voluntary association of more than 50 countries, most of which were former British colonies.