Geneva, Switzerland, May 20th 2013 (PAHO/WHO) - The 66th World Health Assembly got under way on May 20, with discussions focusing on noncommunicable diseases (NCDs) and the incorporation of health into the post-2015 development agenda. 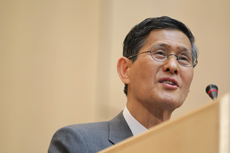 Delegates elected Shigeru Omi, Japan's minister of health, labor and welfare, as president of the assembly. The Americas region is being represented by Minister of Health and Population of Haiti Florence Guillaume, who was elected vice president. Delegates from Angola, Oman, Ukraine and Nepal were elected to represent their respective regions.

Message of the UN Secretary-General

The Assembly opened with a message from United Nations Secretary-General Ban Ki-moon calling attention to the positive impact the Millennium Development Goals (MDGs) have had on the global health agenda. He noted that the World Health Assembly this year will deal with several MDG-related issues, including implementation of the Global Vaccine Action Plan and U.N.  recommendations on women's and children's health.

Ban noted the challenges posed by the growing epidemic of noncommunicable diseases and the role of universal health coverage in ensuring equitable access to health services. He said the World Health Organization (WHO) would need to address not only these but also other new and emerging health problems, such as novel viruses.

The president of this year's Assembly, Shigero Imo, recognized WHO reform efforts, which he said are intended to make the organization more dynamic, relevant, and effective. He also noted the support that countries have given to the concept of universal health coverage.

Watch the video of the President's speech here 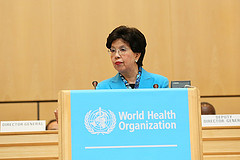 IIn her opening address, WHO Director-General Margaret Chan called on all countries to remain highly vigilant with regard to disease outbreaks such as the novel coronavirus and the H7N9 influenza virus.

"I cannot overemphasize the importance of immediate and fully transparent reporting to WHO, and of strict adherence to your obligations set out in the International Health Regulations," she said. "A threat in one region can quickly become a threat to all."

She acknowledged progress made against HIV, malaria, and tuberculosis but warned that these achievements could be threatened by increased resistance to the drugs used for their treatment. She urged countries to recognize and respond to the threat of antimicrobial resistance.

In contrast to risk factors for infectious diseases, "many of the risk factors for noncommunicable diseases are amplified by the products and practices of large and economically powerful forces," Chan noted, adding: "WHO will never be on speaking terms with the tobacco industry. At the same time, I do not exclude cooperation with other industries that have a role to play in reducing the risks for NCDs."

She said she is aware of the conflicts of interest inherent in this type of relationship, but that WHO has safeguards to prevent such conflicts and will use these when interacting with these industries.

Chan also urged WHO Member States "to do everything they can to ensure that health occupies a high place on the new development agenda."

The Region of the Americas 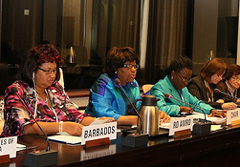 Prior to the opening of the World Health Assembly, the director of the Pan American Health Organization (PAHO), Dr. Carissa F. Etienne, held a meeting with delegations from the Americas to discuss a common position on various issues that will be dealt with during the Assembly this week. 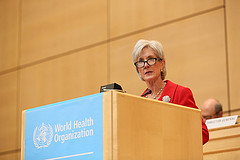 During the afternoon session, United States Secretary of Health and Human Services Kathleen Sebelius described Pan American cooperation in health over the years. She said universal health coverage is essential for both human health and social and economic development, and that it is a shared priority in the Americas and around the world. She acknowledged the support of PAHO and WHO in helping countries advance toward universal health coverage.

Mexico's secretary of health, Mercedes Juan, urged a central place for health in the post-2015 development agenda. "Putting health at the center of public policies will position us better for the development of our nations," she said.

Minister of Health Midori de Habich of Peru said that "universal coverage is a necessity and a civil right." She noted that Peru, as part of efforts to fight noncommunicable diseases, recently enacted legislation that promotes healthy diets for schoolchildren and that ensures consumers are informed of the contents of processed foods.

Committee A began discussions on the draft action plan for the prevention and control of noncommunicable diseases, which includes a monitoring framework and targets. The plan seeks a 25% reduction in premature mortality from NCDs by 2025.

A group headed by Pakistan and the United States will negotiate the final text of the resolution and the main points of the action plan. Both will be considered by the Assembly in the coming days. 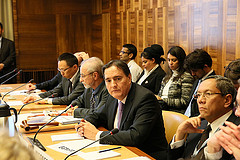 Brazil plans to promote a comprehensive resolution on viral hepatitis at the next World Health Assembly in 2014 and has offered to lead efforts to prepare it, Vice Minister of Health Jarbas Barbosa announced at a parallel event organized by his country on Viral Hepatitis: Facing the challenge in the 21st century. The impact of hepatitis in Brazil, Egypt, Indonesia, Scotland and Mongolia was described during the event.

For more information visit this link.

She said ensuring the right skills, distribution and organization of human resources for health is a key challenge for efforts to achieve universal health coverage. She said these issues should be dealt with in depth at the 3rd Global Forum on Human Resources for Health, to be held in Brazil in November 2013.

For more information visit this link.

At a dinner organized by the Government of Mexico, Etienne reaffirmed PAHO's commitment to work closely with the countries of Central America to improve their public health systems. She said joint efforts that include new forms of cooperation and participation will help countries reach the most vulnerable populations and ensure that they have access to health services.