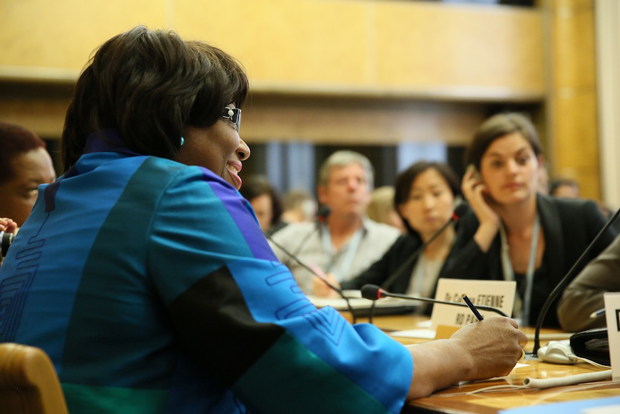 Geneva, Switzerland, 20 May 2013 (PAHO/WHO) — Countries that aspire to achieve universal health coverage will have to reshape their health workforces to ensure the right skills, distribution and organization of health personnel, said Carissa F. Etienne, director of the Pan American Health Organization/World Health Organization (PAHO/WHO), during a special side event on human resources for health held in Geneva during this week's 66th World Health Assembly.

The event, on 20 May, was organized by the delegations of Brazil and Belgium to highlight issues that will be discussed at the Third Global Forum on Human Resources for Health, scheduled for November 2013 in Brazil.

PAHO Director Etienne said that few countries could attain universal health coverage with the human resources they currently have. Health workers often are not prepared for the roles they are assigned, she noted, citing as an example a hospital physician who is asked to be a community doctor without being trained for that role. In some cases, the problem is training programs that need updating; in other cases, the issue is distribution--in most countries, human resources for health are concentrated in urban areas, while health facilities in rural and remote areas are inadequately staffed.

Etienne said she hopes the Third Global Forum on Human Resources for Health will raise awareness of these problems. She urged delegates to become promoters of universal health coverage and to encourage the participation of health workers in efforts to reshape the health workforce to help achieve the goals of universal coverage.

Mozart Sales, Brazil's secretary of labor management and health education, said the challenges of the health workforce in some countries have reached a critical point and that the November forum offers an opportunity to develop a new strategy for better integrating these issues into different health policies. He said Brazil's experience in this area offers important lessons.

Other speakers at the event included representatives from Belgium, South Africa, the United States, and the World Bank.