Geneva, 22 May 2013 (PAHO/WHO) — Minister of Health Florence Guillaume of Haiti and Pan American Health Organization (PAHO) Director Carissa F. Etienne visited a photography exhibit on "Water, Health and Hope on the Island of Hispaniola" today at the Palace of Nations, where the 66th World Health Assembly is being held this week. 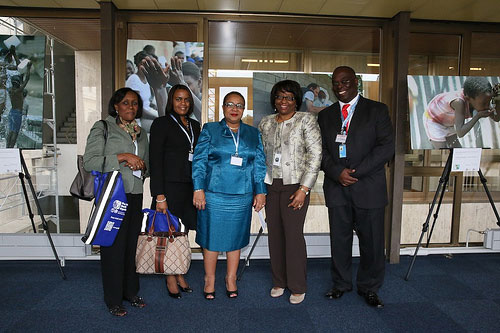 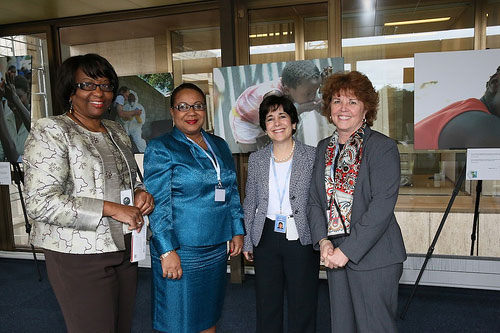 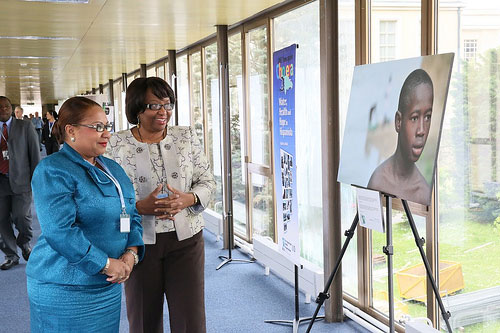 The exhibit shows photographs taken by PAHO communication staff in the aftermath of the January 2010 earthquake and during the cholera epidemic that broke out later that year. The photos illustrate some of the water and sanitation challenges facing Haiti.

As Guillaume viewed the photos, Etienne expressed PAHO's continuing commitment to support Haiti in improving health and especially in expanding the population's access to improved water and sanitation.

In February of this year, the Haitian government launched a $2.2 billion plan to eliminate cholera over the next 10 years through major investments in water and sanitation.

PAHO/WHO, UNICEF and the U.S. Centers for Disease Control and Prevention (CDC) are supporting these efforts through the Regional Coalition for Water and Sanitation to Eliminate Cholera in the Island of Hispaniola, established in June 2012. The coalition, which has grown to 20 members, is providing technical expertise and mobilizing resources for the plan's implementation.

Guillaume spoke earlier in the day before delegates to the World Health Assembly describing challenges facing Haiti as a result of the earthquake, which claimed over 200,000 lives, and the cholera epidemic, which has sickened more than 650,000 people and claimed over 8,000 lives.

"But Haiti is not just this," said Guillaume. "It is a country of dignified citizens who find the courage to smile and who now want to advance decisively on the road to real change."