Washington, D.C., 22 May 2013 (PAHO/WHO) -- Deputy Director Jon K. Andrus today presented the 2008-2012 Quinquennial Report of the Director of the Pan American Health Organization (PAHO) to the Permanent Council of the Organization of American States (OAS). 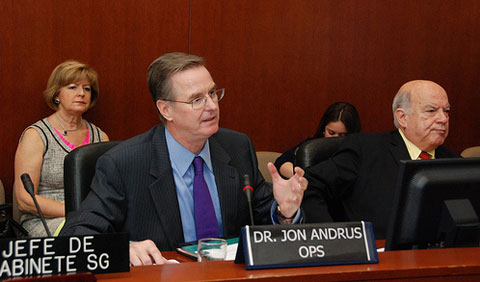 The report, published last year, describes major public health achievements in the Americas during the first decade of the 21st century as well as PAHO's contributions to those achievements. As a member of the Inter-American System,  PAHO presents the annual and five-year reports of its director to the Permanent Council each year.

Andrus described the first decade of the new millennium as "a period of significant, if mixed, progress for health and development in the Americas." At the regional level, average life expectancy gained four years between 2000 and 2012, rising from 72.4 to 76.4 years. The region's aging population and the related rise in noncommunicable diseases (NCDs) were the two most important trends shaping health in the Americas, said Andrus.

In addition to life expectancy gains, Andrus cited other key areas of health progress during the 2000s, including:

Andrus noted that health gains have not been shared equally between and within countries, and that inequity remains the greatest challenge for health and development in the Americas. Despite progress in reducing poverty over the decade of the 2000s, the Americas retained its status as the world's most unequal region.

Andrus also announced that Colombia recently became the first country in the world to be verified free of transmission of onchocerciasis (river blindness). He asked OAS member countries to support a resolution at their upcoming OAS General Assembly in Guatemala endorsing the goal of eliminating neglected diseases from the Americas.

"I ask today for your strong political commitment to deliver the final push to eliminate these diseases of poverty and neglect from the Americas," he said.

PAHO is the specialized agency of the Inter-American System, of which the OAS is also a member.  PAHO is also a member of the United Nations system, as the Regional Office of the World Health Organization (WHO).