Geneva, Switzerland, 22 May 2013 (PAHO/WHO) — Delegates from the countries adopted resolutions on the Action plan for the prevention of avoidable blindness and visual impairment, as well as others on the budget and finances of the World Health Organization (WHO). They also initiated debates on resolutions linked to mental health, disability, and the post-2015 development agenda. 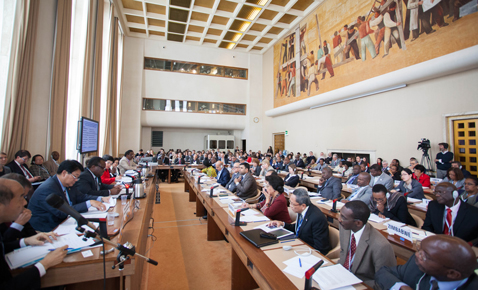 Just a few days from ending the yearly meeting of the world's health authorities, the commissions charged with reaching agreement on the proposed resolutions now stand at the center of intercountry debate.
Approval of the Action plan for the prevention of avoidable blindness and visual impairment
The delegates adopted the Draft action plan for the prevention of avoidable blindness and visual impairment 2014—2019 (A66/11). This plan is aimed at improving eye health, reducing avoidable visual impairment, and ensuring access to rehabilitation services for those who have visual impairments. The world goal is to reduce the prevalence of blindness or avoidable visual impairments by 25% by 2019.
Representatives from the countries were pleased to receive the draft action plan, which they approved without changes.
Mental health, disability, and the post-2015 agenda continue under debate
The delegations initiated discussions on the resolution to adopt a Draft comprehensive mental health action plan 2013—2020 (A66/10 Rev.1), as well as the WHO Secretariat's report on Disability (A66/12) and the draft resolution on that topic. The countries suggested making changes in both areas; therefore, they will be revisiting the discussions later this week.
In addition, the debate on health in the post-2015 development agenda started (A66/13 and A66/47) and will continue this Thursday.
Health conditions in the occupied Palestinian territory, including east Jerusalem, and in the occupied Syrian Golan
The World Health Assembly delegates also adopted a resolution on health conditions in the occupied territories of Palestine, including east Jerusalem, and in the occupied Syrian Golan. They reaffirmed the need for full coverage of health services, while recognizing that the acute shortage of financial and medical resources is jeopardizing the population's access to curative and preventive services (A66/28).
WHO financial reports
Representatives from the countries noted the 2012 financial report, which for the first time is in full compliance with the IPSAS (International Accounting Standards for the Public Sector). The report provides details on income and expenditures for the year, as well as assets and liabilities. The IPSAS-compliant report has been approved by the External Auditor. Thanks to cost-saving measures and a lower than expected decrease in voluntary contributions, the Organization is nearly fully funded.
However, the high level of highly specified voluntary contributions is cause for concern, as it creates a funding imbalance across programs. Discussions on the need for more flexible funding from non-State actors will need to be integrated into the financing dialogue that will start in June. Members States suggested that with the currently increased transparency of the financial reports and statements, these could be used in discussions with donors. The Assembly accepted the Director-General's financial report. (A66/29 and A66/29 Add. 1)
Furthermore, the delegates emphasized that the contribution collection rate for 2012 reached 87%. The document on Status of collection of assessed contributions, including Member States in arrears in the payment of their contributions to an extent that would justify invoking Article 7 of the Constitution (WHA66/30) provides a list of those countries, as well as other information on the process.
Delegates also adopted a resolution to address the imbalance between income currency and expenditure currency. Starting in 2014, the 65 countries that contributed more than 200 thousand dollars will pay 50% of their assessed contributions in United States dollars and 50%, in Swiss francs. This currency split is already being used by other United Nations agencies to deal with the risks arising from fluctuations in currency.
Technical briefing
The Director-General of WHO, Margaret Chan, applauded the contribution made by the Global Fund to fight AIDS,

Tuberculosis and Malaria to meet the targets of the Millennium Development Goals, during a technical briefing on the Global Fund's New Funding Model and its impact on country cooperation and WHO support.
The Executive Director of the Global Fund, Mark Dybul, explained that the new approach builds on three core principles: working as a financing institution that partners with others to serve countries; providing predictability around resource availability; and creating a platform for broader public health support.
The Minister of Health of El Salvador, María Isabel Rodríguez—as well as the ministers of Myanmar and Zimbabwe—have all made proposals using the New Funding Model. They also welcomed these changes and commended support provided by WHO and other technical partners.
Other speakers praised the Fund's closer alignment with country plans and its willingness to provide more support for health systems, as well as its readiness to learn from experience and increase transparency.
The Region of the Americas in the Assembly's plenary session
Today the plenary session of the World Assembly closed its round of country presentations. Several delegations from the Region of the Americas were involved.

Ecuador sees "health &hellip; as part of overall well-being", declared Francisco Vallejo, Under Secretary of Public Health of Ecuador. He added that the country is working on the concept that health should be part of all public policies. "Addressing social determinants and strengthening intersectoral ties has allowed Ecuador to be among those countries with the fewest inequities," he affirmed. In addition to ratifying his country's support for advancing health on the development agenda, Vallejo also called attention to the issue of disability currently being tackled in the World Health Assembly and provided details on what actions his country is taking in that regard.

In turn, Honduras—explained Efraín Díaz Arrivillaga, Permanent Representative of Honduras to the United Nations—is promoting access to health based on primary care, taking the life cycle into consideration, while following a dual approach based on rights and interculturalism. He pointed out that the country has prioritized noncommunicable diseases. In this regard, Díaz asked that chronic renal disease be included in the debate, given the magnitude of this problem in his country.
The delegate from Venezuela, Pedro Albarrán, emphasized that health is embedded in the country's constitution as an essential right governed by the principles of free services, universality, comprehensiveness, and solidarity. He emphasized that Venezuela has been achieving the Millennium Development Goals "since it placed the human being in the center of public policies, as the main legacy of Hugo Chavez," former president of his country. Albarrán said that new challenges "are related to reducing violence of all types, linked to the use and abuse of drugs and alcohol," which is "a consequence of capitalism influenced by media values."

The Minister of Health of Haiti, Florence Guillaume, recalled the problems that her country faced following the 2010 earthquake and subsequent cholera outbreak. She stated that despite all its difficulties, Haiti has been making efforts to achieve the MDGs and "is making progress towards providing universal health coverage through community health workers."
"Both now and after 2015, we need to take into account the country's socioeconomic development. We have learned our lessons and will achieve success as long as we have outside assistance and use it in more effective ways that take the population into account," said the minister, who thanked WHO and the partners and governments that have provided support to Haiti's health system. "We hope that they will continue to help us achieve a better world," she concluded.
Side event: Disaggregating health data by social determinants will aid in taking targeted actions to reduce inequities
Disaggregating health data not only by gender, but also by social determinants, will make generate the information needed to take actions aimed at reducing inequities and improving people's health. "We have to go beyond the averages to know the real story behind what is happening," affirmed Carissa F. Etienne, director of the Pan American Health Organization / World Health Organization (PAHO/WHO), in a meeting on Gender, equity and human rights: breaking down data in order to see reality, organized by the delegations of Canada and WHO. For more information, see the PAHO Director's Corner at https://www.paho.org/hq//index.php?option=com_content&view=article&id=8711&Itemid=1926&lang=es (not available in English).
For more information on the World Health Assembly and the Americas, see coverage on the PAHO web.