Geneva, 22 May 2013 (PAHO/WHO) — Health data should be disaggregated by social determinants, in addition to gender, said Carissa F. Etienne, director of the Pan American Health Organization/World Health Organization (PAHO/WHO) during a meeting on Gender, equity and human rights: breaking down the data to see the reality, organized by Canada's delegation to the 66th World Health Assembly. 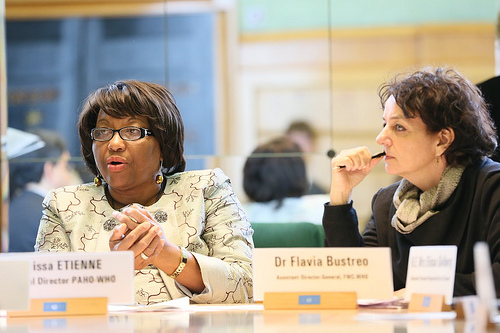 "We have to look beyond data averages to understand the real story of what is going on," said Etienne, head of WHO's Regional Office for the Americas, which is the world's most unequal region and where major disparities persist both between and within countries.

Etienne said that knowing where and what groups face major gaps in access to health is important in order to reduce those gaps, as is understanding why they are marginalized, how they become marginalized, and whether or not progress is being made. She acknowledged that can be a difficult task because of informational "black holes" and because, in many cases, existing data can be inconsistent even within a single organization. She called for developing better indicators to collect the necessary the data to support more effective action.

PAHO/WHO is working to disaggregate data in order to pinpoint disparities in access to health, she noted. To this end, every one of the Organization's programs undertakes evaluations based on gender, equity, and human rights.

Pablo Kuri, Mexico's undersecretary of health, said that disaggregating health data by gender is necessary, but agreed that "it is not enough" and that other data related to health determinants are needed.

Kuri said another issue to explore in the Americas is how to create a common database or a policy for how data will be shared. Noting that not all countries are using the same indicators, he suggested that PAHO Member States could work on drafting a set of common indicators.

Much remains to be done in the area of disaggregating health data, said Elissa Golberg, Canada's permanent representative to the United Nations in Geneva. She said "disaggregating data is a key factor in tackling inequities in access to health."

Also participating in the special meeting were Flavia Bustero, WHO assistant director-general for family, women's and children's health; and Ties Boerma, director of WHO 's Department of Health Statistics and Information System.