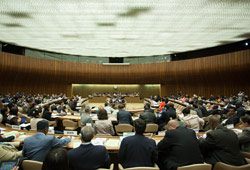 Geneva, Switzerland, May 23rd 2013 (PAHO/WHO) — At today's session of the 66th World Health Assembly, committees met to debate resolutions on the health of women and children, the social determinants of health and "health in all policies," and the implementation of the International Health Regulations, among other subjects.

Preparing for the High-level Meeting on Disability and Development: the health sector's contribution

Over 1 billion people——about 15% of the world's population——experience some form of disability, according to the 2011 World Report on Disability. As a result of aging populations and the increase in noncommunicable diseases, more and more people will be living with disabilities.

On 23 September 2013, a one-day High-level Meeting of the United Nations General Assembly will take place in New York to discuss "The way forward: a disability-inclusive development agenda towards 2015 and beyond." A technical briefing held on the fourth day of the World Health Assembly provided health-sector input for the high-level meeting. The September meeting is expected to produce an action-oriented outcome document that supports the aims of the Convention on the Rights of Persons with Disabilities.

Disability as a human rights issue was a recurring theme at the technical briefing. People with disabilities face multiple barriers, such as inadequate access to information and buildings and unmet needs for health care. Health services need to be inclusive of people with disability.

WHO officials, technical experts from Nigeria, South Africa, Spain, and USAID, as well as Alexandre Jollien, a philosopher and author living with athestosis (slow, involuntary movements of body parts), called for an end to stigma and discrimination against people with disabilities and for scaling-up inclusive healthcare services.
See: Disability and rehabilitation

Work in the committees

Delegates approved a resolution (EB132.R4) on implementation of the recommendations of the U.N. Commission on Life-Saving Commodities for Women and Children.

The resolution urges Member States to improve the quality, supply, and use of 13 life-saving commodities for women and children, such as contraceptives, antibiotics, and oral rehydration salts. It also calls for streamlining the registration process for these commodies and for the development of plans to increase demand and facilitate universal access to them. The resolution calls on WHO to support countries and other partners to achieve these goals. (A66/14)

Implementation of the International Health Regulations (2005)

Delegates requested an update from the WHO Secretariat and the Kingdom of Saudi Arabia on the recent emergence of MERS-CoV (previously known as Novel Coronavirus). The Secretariat and the Saudi Ministry of Health provided background information and a history of the emergence and response to the virus to date. Discussion of the item will continue tomorrow.

See: Global overview of an emerging novel coronavirus?
Resolution in discussion: A66/16  A66/16 Add.1

Having considered the status of the collection of assessed contributions and recent payments, the Assembly noted that the following countries will retain their voting privileges: Bangladesh, Sudan, Djibouti, Iran (Islamic Republic of), Marshall Islands, Niger, Swaziland, Tuvalu and Vanuatu. The list of countries still in arrears in their payments and more information about the process are available in document WHA66/30 below. Delegations noted that the rate of collection of assessed contributions for 2012 was 87%.

See: Status of collection of assessed contributions, including Member States in arrears in the payment of their contributions

Report of the Internal Auditor

Delegates accepted the report of the Office of Internal Oversight Services (IOS) for 2012, noting that 25 audits and many recent recommendations were progressing toward closure. While expressing concern regarding the capacity of the audit function, they appreciated that WHO carried out audits on the areas of highest risk and identified some systematic challenges and recurring issues.

The director-general informed delegates that the Global Policy Group had reviewed the annual reports from IOS and reiterated its commitment to address challenges raised by both external and internal auditors. The group has progressed with the formalization of the risk management approach and highlighted the need to strengthen WHO's internal control framework.

Starting in June 2013, a new management dashboard based on WHO's updated global management system will provide performance indicators on 11 key priority areas and processes. Also, a new Compliance, Risk Management and Ethics Office will be established in Geneva to work across the three levels of the organization to identify and tackle recurring problems.

More work is also taking place in regional and country offices to provide better guidelines, clarify functions and responsibilities of staff and identify their training needs.

Director-General Margaret Chan and the president of 66th World Health Assembly, Japan's Shigeru Omi, awarded five prizes for leadership in public health at the Assembly on 23 May. 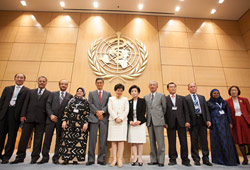 The 2013 Leon Bernard Foundation Prize was awarded (in absentia) to Dr Teng Shuzhong of the People's Republic of China. Shuzhong was awarded the prize for his significant contribution to health training and healthcare services in Fenghuang county, Hunan province, China.

The 2013 Sasakawa Health Prize was awarded to Professor No-Yai Park of the Republic of Korea, who has been instrumental in improving the quality of public health centers and health staff education in her country, particularly in the area of maternal and child care nursing.

The 2013 United Arab Emirates Health Foundation Prize was awarded to Dr Laila Ali Akbar Bastaki of Kuwait. Bastaki is recognized for her outstanding contribution to research on and management of genetic disorders, and for helping to increase delivery of health services in Kuwait, particularly through the re-establishment of the neonatal screening program.

The 2013 State of Kuwait Prize for Research in Health Promotion was awarded to Dr Guiqi Wang of China. Wang was honored for his contribution to early detection and treatment of esophageal cancer, one of the most common forms of cancer in China.

The 2013 Dr LEE Jong-wook Memorial Prize for Public Health was awarded jointly to Dr An Dong of the People's Republic of China and the Diabetes Society of Maldives, represented by Ms Aishath Shiruhana. This is the first time that the prize is being shared.

Dong has made outstanding contributions to public health and prevention and control of endemic fluorosis in the province of Guizhou, China. The Diabetes Society of Maldives was honored for its success in creating public awareness on diabetes, making health promotion interventions for prevention of noncommunicable diseases, and training local staff to offer counseling and treatment.