$29.1 million pledged to support cholera elimination in Haiti and the Dominican Republic

Washington, D.C., 31 May 2013 (PAHO/WHO) — Members of an international coalition today announced new financial support for efforts to eliminate cholera from Haiti and the Dominican Republic, through major investments in water and sanitation and health systems strengthening. The support was announced in a meeting of the Regional Coalition to Eliminate Cholera Transmission in Hispaniola, held at the Pan American Health Organization/World Health Organization (PAHO/WHO) in Washington, D.C. 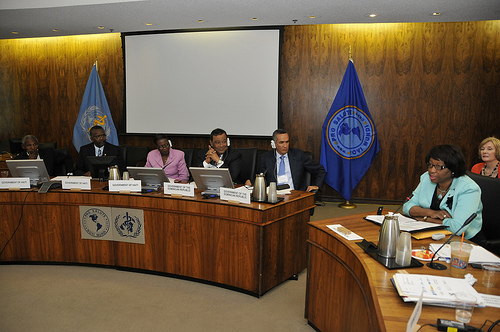 See link to set of photos of event

The funds announced at the meeting include $20 million from the World Bank, $5 million from UNICEF and $3.1 million from PAHO/WHO—all members of the Regional Coalition—plus $1 million from the United Nations Development Program (UNDP).  In addition, the International Federation of Red Cross and Red Crescent Societies (IFRC) said it would launch a new donation drive whose proceeds would go exclusively to support anti-cholera efforts.

Today's $29.1 million in pledges brings the total funds committed to support the national plans to $209.4 million, less than half the amount needed over just the next two years.

Marie Raymond, Director-General in Haiti's Ministry of Health and Population (MSPP), said bridging this funding gap is an issue of immediate concern.

"The rainy season is upon us. Alas, our resources are not as available as they need to be. We must take urgent and bold steps to meet these needs."

"We must challenge governments and partners to come up with the funds that are needed to get the job done," said PAHO Director Carissa F. Etienne. "The goal is not just eliminating cholera. It is to ensure that every man, woman and child has access to safe water and sanitation. This is basic to the dignity of every human being."

In January 2012, the governments of Haiti and the Dominican Republic—jointly with PAHO/WHO, UNICEF and the U.S. Centers for Disease Control and Prevention (CDC)—issued a "call to action" for the international community to help eliminate cholera from Hispaniola by bringing Haiti up to regional levels of water and sanitation coverage.

The 10-year timeframe for cholera elimination in Haiti is based in part on the experience of a cholera epidemic in the 1990s that began in Peru and spread to more than 21 countries in the Americas in just two years. With support from the international community, investments in water and sanitation infrastructure contributed to the virtual elimination of cholera from Central and South America within a decade.

In Haiti, "investments in water and sanitation are absolutely essential to eliminate cholera transmission, but they will also have other spin-off benefits," said PAHO Deputy Director Jon K. Andrus. "They will reduce other water-borne illnesses and contribute to stronger economic growth, national security, healthier families and communities, improved agricultural production of fruits and vegetables, and in general increase productivity by improving the health of the population."

Paul Farmer, U.N. Special Adviser for Community-based Medicine and Lessons from Haiti, joined in calling for increased funding but also urged international partners to show "pragmatic solidarity" with Haiti. He said donor agencies could help more by assuming some of the burden of processing and accountability with regard to external financial resources.

The Regional Coalition for Water and Sanitation to Eliminate Cholera Transmission in Hispaniola was launched in June 2012 by PAHO/WHO, UNICEF and the CDC. Its other members are the Spanish Agency for International Development Cooperation (AECID), the Association of Haitian Physicians Abroad (AMHE), the Caribbean Community (CARICOM), CWWA, Catholic Relief Services (CRS), FUNASA of Brazil, AIDIS, Inter-American Development Bank (IDB), IFRC, Partners in Health / Zanmi Vasant, the World Bank, WASH Advocates, the Veolia Environment Foundation, and the Millennium Water Alliance (MWA). Two new members of the Coalition were announced today: the American Society of Tropical Medicine and Hygiene (ASTMH) and World Vision. PAHO/WHO serves as the secretariat of the Coalition.